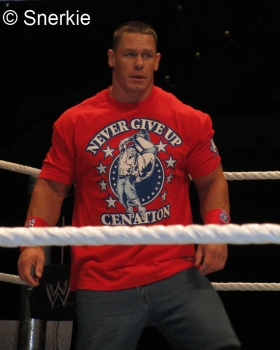 The final shots are fired.

Just six nights before the biggest event of the year, WrestleMania, the 984th edition of WWE Monday Night RAW SuperShow came to you, live, from the Philips Arena in Atlanta, GA. Before their “Once in a Lifetime” Match at WrestleMania, The Rock and John Cena would go face-to-face one last time before they make history in Miami. RAW would also see Team Teddy and Team Johnny finally reach completion as the world would find out the sixth and final members of both teams.

Six nights before he challenges Daniel Bryan for the World Heavyweight Championship at WrestleMania, “The Great White” Sheamus teamed with “The Viper” Randy Orton to face World Heavyweight Champion Daniel Bryan, with A.J. in his corner, and Orton’s WrestleMania opponent, “The Big Red Monster” Kane in the opening match of the night. During the match, Sheamus would go for the Brogue Kick on Daniel Bryan, but Bryan’s girlfriend, A.J., would enter the ring, stepping between the two of them. This distraction would allow Bryan to dodge the Brogue Kick before Kane gets on the ring apron, planting Sheamus with a chokeslam, allowing Bryan to pin Sheamus for the win. Will Daniel Bryan use similar tactics when he defends the World Heavyweight Title against Sheamus at WrestleMania?

Showing his allegiance for Team Johnny, RAW commentator Michael Cole appears in the ring with a Team Johnny t-shirt on, stating that he has been named the “official commentator” for Team Johnny at WrestleMania. Cole then introduces the Interim General Manager of RAW, John Laurinaitis, who reveals the “official flag bearer” for Team Johnny, Vickie Guerrero. Laurinaitis then brings out the team captain for Team Johnny, David Otunga. SmackDown commentator Booker T then tells Michael Cole that he will be the official commentator for Team Teddy before introducing the General Manager of SmackDown, Theodore Long. Long then introduces the Team Teddy captain, United States Champion Santino Marella, who is accompanied by Team Teddy mascot, Hornswoggle, as the team captains face off. During the match, David Otunga stops to pose and wave the Team Johnny flag, but Hornswoggle comes in and waves the Team Teddy flag. Otunga then tries to hit Hornswoggle with the Team Teddy flag, but Hornswoggle dodges the flag and Otunga accidentally hits himself with the flag, allowing Santino to hit the Cobra Strike en route to picking up the win. After the match, Santino Marella would aid Theodore Long in humiliating John Laurinaitis again as Long would shove Laurinaitis down again. Santino was then set to deliver the Cobra to Laurinaitis, but The Miz comes out of nowhere, planting Santino with the Skull Crushing Finale! John Laurinaitis then congratulates The Miz on being a member of Team Johnny, completing Laurinaitis’ team as Team Johnny will consist of team captain David Otunga, Christian, Mark Henry, Dolph Ziggler, Jack Swagger, & The Miz! Who will Theodore Long select as the final member of Team Teddy?

Before she teams with Beth Phoenix to face Kelly Kelly & EXTRA’s Maria Menounos this Sunday at WrestleMania, Eve, with Divas Champion Beth Phoenix in her corner, went one-on-one with her former friend, Kelly Kelly. In the end, it was Eve missing the Evesault that allowed Kelly Kelly to catch Eve with a roll-up to pick up the win.

With his WWE Title defense against Chris Jericho at WrestleMania coming up this Sunday night, WWE Champion CM Punk went one-on-one with a former tag team partner of Jericho as “Captain Charisma” Christian returns to action to face the WWE Champion in a non-title match. Before the match begins, Chris Jericho appears on the big screen, vowing that he will defeat CM Punk and become the WWE Champion at WrestleMania. Jericho continues that he will expose Punk as a “professional” and “personal fraud”. Jericho then says that he has found information on Punk’s mother, but Punk’s mom is a “decent woman with no vices whatsoever”. Jericho then reveals that Punk’s parents were married after Punk was born, saying that Punk is the “legal definition of a bastard”. With Punk’s attention on Jericho, Christian strikes, assaulting the WWE Champion before sending Punk to the outside of the ring. An infuriated Punk then fires back, repeatedly bouncing Christian’s skull off of the announce table before delivering a skull-shattering kick to the head of Christian. Punk then delivers a series of elbows to Christian before dropping Christian face-first onto the steel steps with a modified GTS! The out-of-control WWE Champion then locks the Anaconda Vise in on Christian, refusing to let go of the hold until several referees finally manage to break it up. Punk then dives back onto Christian, once again locking in the Vise before referees break it up again. What is the status of Christian following this anger-fueled assault? Has Chris Jericho sent CM Punk over the edge? Will Chris Jericho pay for making it personal this Sunday at WrestleMania?

With his Intercontinental Title match against champion Cody Rhodes at WrestleMania just a few days away, “The World’s Largest Athlete” Big Show faced one-half of the WWE Tag Team Champions, Primo, with Epico and Rosa Mendes in his corner. In the end, it was Big Show planting Primo with a chokeslam en route to picking up the win. After the match, Epico tries to attack Big Show from behind, but Epico is planted with a chokeslam for his trouble. Intercontinental Champion Cody Rhodes then comes out, telling Big Show that, after WrestleMania, Show will become a “verb” as “Big Show” will be used to describe failure. Rhodes then vows that Show will be the “fool” come WrestleMania.

During the match between Big Show and Primo, it was revealed that, as a result of the attack by CM Punk earlier in the night, Christian has re-aggravated his neck injury and will be unable to be a part of Team Johnny at WrestleMania! With just six nights before the big event, who will John Laurinaitis find to replace Christian on his team?

Just prior to the match between Mark Henry and The Great Khali, it was revealed that, following Christian’s re-injury, John Laurinaitis has selected Drew McIntyre as the final member of Team Johnny.

The respective behemoths of Team Teddy and Team Johnny squared off on RAW as Team Teddy member, “The Punjabi Giant” The Great Khali, with Theodore Long in his corner, went one-on-one with Team Johnny member, “The World’s Strongest Man” Mark Henry, with John Laurinaitis in his corner. In the end, it was Mark Henry using his superior strength to plant The Great Khali with the World’s Strongest Slam en route to picking up the win. After the match, John Laurinaitis would catch Theodore Long by surprise, throwing Long into the ring, bringing Long face-to-face with Mark Henry. Team Johnny members David Otunga, The Miz, Dolph Ziggler, Jack Swagger, and Drew McIntyre then come out to try and prevent any interference with Laurinaitis’ sinister plan. However, Team Teddy members Santino Marella and Zack Ryder try to come to the aid of their leader, but are quickly overwhelmed by the five-on-two advantage. R-Truth then joins the fray before Kofi Kingston manages to get past the wall of protection, but is quickly dispatched by Mark Henry, who plants Kofi with the World’s Strongest Slam. With his team down, Theodore Long was at the mercy of Mark Henry as Henry lifts Theodore Long up, but before Henry can deliver the World’s Strongest Slam, SmackDown commentator Booker T leaves his announce position to come to Long’s aid! The six-time World Champion takes it to Mark Henry, laying the big man out with the Scissors Kick before agreeing to be a part of Team Teddy at WrestleMania! With the addition of Booker T, can Team Teddy best Team Johnny this Sunday at WrestleMania to give complete control of both RAW and SmackDown to Theodore Long?

With their “Once in a Lifetime” Match at WrestleMania six nights away, it was then time for the final face-off between The Rock and John Cena. The Rock comes out first, saying that, back in 2004 at WrestleMania XX, everyone thought that was his last match. Rock continues that, since then, everyone has been asking when he was coming back, but he did not know until last year’s WrestleMania when he delivered the Rock Bottom to John Cena and that was the moment he knew that the “wait was over”. Rock then says that, right there in Atlanta, the match for WrestleMania 28 was set last year and it was made because of the fans. Rock continues that there was only one man that the fans wanted him to face at WrestleMania and that was John Cena. Rock then says that Cena became the “heartbeat” of the WWE, but Cena has “never” faced anyone like The Rock. Before Rock can continue, he is interrupted by the arrival of John Cena, who admits that he will get a mixed reaction from the crowd at WrestleMania. Cena then tells The Rock that Rock will “never” see anything like John Cena, adding that, like every week, he is there with a smile on his face. Cena then says that, during the time that The Rock was gone, he was the one that was “served to the wolves”. Cena continues that he “rises above” and he wins and, while the fans may hate it, they know that he will win at WrestleMania and he knows it as well. Cena then tells The Rock that he has been an “active member” of the roster longer than Rock and he has been in the WWE for the good times and the bad times. Cena continues that everyone knows that he loves the WWE and, while The Rock will star in G.I. Joe this summer, he will still be in the WWE and he will be damned if Rock will take his “life” away from him. Cena then says that he has to win at WrestleMania.

The Rock says that the match is just as important to him as it is to John Cena and that the fans know that he is not a “visitor” in the WWE. The Rock then says that Cena has never had an opponent that he could not overcome until now. Rock continues that there has never been a man who could say that he walked into WrestleMania and beat Hulk Hogan, Stone Cold Steve Austin, and John Cena, adding that, professionally, he needs to beat Cena to become the “greatest WWE Superstar of all-time”, but, on a personal level, he just does not like Cena. Rock then vows that, not only will he win, but he will give Cena the “ass-kicking of a lifetime” and the whole world, including the two of them, knows it. Cena then vows that the headlines will read that he whipped The Rock’s ass at WrestleMania. After a year of build-up, Rock Bottoms, Attitude Adjustments, insults, and promises, what will happen when The Rock and John Cena finally clash, one-on-one, at WrestleMania?