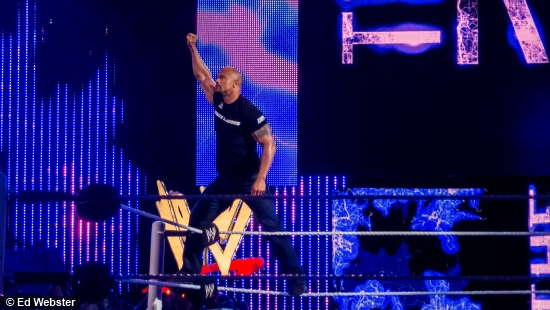 Twenty nights before WrestleMania XXVIII, the 982nd edition of WWE Monday Night RAW SuperShow came to you, live, from the Quicken Loans Arena in Cleveland, OH. After the bombshell announcement last week that WWE Hall of Famer “The Heartbreak Kid” Shawn Michaels will officiate the End of an Era Hell in a Cell Match between Triple H and The Undertaker at WrestleMania in three weeks, “The Phenom” The Undertaker would appear on RAW to confront the Special Referee for the epic match. With their own epic encounter at WrestleMania on the horizon, both The Rock and John Cena would present their own forms of musical entertainment as The Rock will hold a Rock Concert, while Rock’s WrestleMania opponent, John Cena, will perform a rap song. Also, after WWE.com broke the news that the WWE Board of Directors have declared a 12-Man Tag Match between six Superstars selected by Interim RAW General Manager John Laurinaitis and six Superstars selected by SmackDown General Manager Theodore Long with the winning team earning total control of both RAW and SmackDown for the winning GM! For the first time since October, RAW would have a special Guest Star as the star of the hit USA Network series, “Psych”, James Roday would show up, live, in the hometown of The Miz, an upcoming guest star on “Psych”.

The show kicks off with Hall of Famer Jerry “The King” Lawler in the ring as Lawler reminds everyone that RAW will have the first rock and rap concert in RAW history and both The Rock and John Cena will have the opportunity to express themselves with their own musical talents. Complete with vintage music and vintage attire, John Cena taps into his early WWE career and performs his rap song. Cena raps that, right now, The Rock is a “G.I. Joke” and that both The Rock and Dwayne Johnson are “jack-offs”. Cena then raps that, after WrestleMania, The Rock will need “surgery” on his face because Rock’s “popping pecs” have had more work done than a Diva, finishing the rap with the promise to put his “nuts” in The Rock’s face! How will The Rock respond to John Cena’s rap when The Rock performs his Rock Concert?

Twenty nights before he challenges Daniel Bryan for the World Heavyweight Championship at WrestleMania, “The Great White” Sheamus went one-on-one with “The Show-Off” Dolph Ziggler, with Vickie Guerrero in his corner, in the opening match of the night. During the match, the action spills to the outside of the ring, where Dolph Ziggler sends Sheamus hard into the announcer’s table, back-first, nearly turning the table over and leaving some major welts on the back of Sheamus. At the end of a hard-fought match, it was Sheamus coming out of nowhere with the Brogue Kick to Dolph Ziggler en route to picking up the win. Will Daniel Bryan suffer the same fate in three weeks’ time at WrestleMania when he defends the World Heavyweight Title against the seemingly unstoppable Sheamus?

Twenty nights before his team of six Superstars faces Theodore Long’s team in a 12-Man Tag Match at WrestleMania with the winning team earning their team organizer control of both RAW and SmackDown, Interim RAW General Manager John Laurinaitis was a guest on commentator as the team captain of Team Laurinaitis, David Otunga, teams with an unknown Diva to face the team captain of Team Long, United States Champion Santino Marella, and Aksana in a Mixed Tag Match. However, John Laurinaitis changes the match, making it a 2-on-1 Handicap Match pitting Santino Marella against David Otunga and “The World’s Strongest Man” Mark Henry. As the match gets underway, Theodore Long comes out, getting in an argument with Laurinaitis before shoving the RAW GM back into his chair and onto the floor, embarrassing his counter-part yet again! Meanwhile, in the ring, Mark Henry hits the World’s Strongest Slam en route to picking up the win. After the match, David Otunga and Mark Henry were not finished with the United States Champion as, with Mark Henry holding Santino, Otunga slaps Santino, but Kofi Kingston tries to come to the rescue, only to be quickly overcome with the odds as Henry plants Kofi with the World’s Strongest Slam. Kofi’s tag team partner, R-Truth, then tries to help out, but Truth is also beat down by Otunga and Henry before Otunga plants Truth with his modified spinebuster and Henry hits a big splash on Truth. John Laurinaitis then enters the ring to reveal the newest member of his six-man team for WrestleMania as team captain David Otunga will be joined by Mark Henry! How will Theodore Long respond to Mark Henry joining Team Laurinaitis? Which Superstars will fill out both teams?

Backstage, Eve confronts Zack Ryder and claims that she is not “playing” Ryder because Ryder is “playing” himself before offering that they become “friends with benefits”.

One week after dropping the bombshell announcement that he will be the Special Referee for the End of an Era Hell in a Cell Match between Triple H and The Undertaker at WrestleMania, Hall of Famer “The Heartbreak Kid” Shawn Michaels appeared on RAW to go face-to-face with the man who forced him into retirement at WrestleMania XXVI two years ago, The Undertaker. Michaels says that he being the Special Referee was something that Triple H did not expect, but he also heard something he did not expect last week when Triple H told him that everyone was calling him a “loser” and a “failure”, but Michaels says that no one has said that to me. Michaels then says that there is one man who has been absent for the last couple of weeks before calling The Undertaker to the ring. Undertaker then makes his way to the ring to confront his former WrestleMania rival before Shawn Michaels tells The Undertaker that they used to have the upmost “respect” for each other. Michaels then says that he thought that Undertaker would have had the “guts” to tell him what he thinks of him. Undertaker then does just that, asking if he wants him to call him a “failure”, a “loser”, or that Michaels “could not get the job done”. Undertaker then asks if Michaels is repeating his words or the words chosen for him by Michaels’ good friend, Triple. Michaels then tells Undertaker that Undertaker is the one still in search of “validation” and, last year, Triple H beat Undertaker within an inch of his life at WrestleMania before Michaels re-iterates that he knows who is going to win at this year’s WrestleMania. The Undertaker then tells Michaels that, win or lose, he is “prepared to accept the outcome”, but he is not prepared to accept Michaels sticking his “ego” in the middle of the match. Undertaker continues that his two matches with Michaels, as well as his match with Triple H last year, have all been part of a “destiny”, a destiny that will culminate on April 1 in Miami inside Hell in a Cell. Undertaker continues that, win or lose, the outcome of the match must be “pure”, adding that, if the outcome is not pure, there will be “hell to pay”.

With a spot on Team Laurinaitis at WrestleMania on the line, Cleveland’s own The Miz went one-on-one with WWE Champion CM Punk in a non-title match, with “Psych” star James Roday serving as the guest ring announcer. In the end, it was CM Punk locking in the Anaconda Vise on The Miz, forcing Miz to tap out to pick up the win, keeping The Miz from his WrestleMania spot on Team Laurinaitis. After the match, Chris Jericho appears on the big screen to reveal a dark secret about CM Punk as Jericho tells the world that the WWE Champion’s father was an “alcoholic” and that is why Punk dedicated his life to being straightedge. Jericho continues that Punk is destined to be an alcoholic because it runs in the family before saying that Punk must have horrible nightmares. Jericho then says that he is going to be the one who drives Punk to drinking by taking the WWE Title away from Punk at WrestleMania and, after WrestleMania, he will be recognized for who he truly is, the best in the world and the new WWE Champion. Jericho then says that Punk will be recognized for who he is and who his father was, a “pathetic damn drunk”. A distraught CM Punk then exits the ring and makes the slow walk backstage.

“The Viper” was in action on RAW as Randy Orton went one-on-one with former United States Champion, “The All-American American” Jack Swagger, with Vickie Guerrero in his corner. In the end, it was Randy Orton hitting the RKO en route to picking up the win over Jack Swagger. After the match, Orton started to make his way to the corner of the ring when flames erupt from the ring posts in a message from Kane.

It was announced during RAW that, this Friday on SmackDown, the one and only “Captain Charisma” Christian will return to present a special edition of The Peep Show, with his guests, John Laurinaitis and Theodore Long! What will the two General Managers have to say about the upcoming 12-Man Tag Match with total control of both RAW and SmackDown on the line at WrestleMania? Will we find out any more information about who will make up the teams?

It was also announced during RAW that, on next week’s show, there will be an epic face-off between WrestleMania opponents Triple H and The Undertaker, as well as the Special Referee for their Hell in a Cell Match, Shawn Michaels, as all three legends will be in the same ring at the same time just two weeks before their End of an Era Hell in a Cell Match! In addition to that huge news, next week’s RAW will also see John Cena going one-on-one with “The World’s Strongest Man” Mark Henry.

After the poignant comments made by John Cena during his old school rap at the start of the show, it was then time for the Rock Concert as The Rock would use his musical skills against Cena. After making some jokes at the expense of John Cena, The Rock says that the night is not about a two-minute rap because everyone knows that “Cleveland rocks”. The Rock then gets the Rock Concert underway as Rock sings about Cena having a “menstrual clock” and Cena “not having any balls in his jock”. Rock then sings about Cena’s latest trip to the doctor, where the doctor told Cena to stop begging for a “rectal exam”. Rock then sings a song about Cena and Eve making out, adding that Cena forgot to tell Eve that he was married. Rock continues, singing that there is a “divorce lawyer right up the block”. Rock then sings about the day John Cena was born, singing that the doctor wanted to send Cena “back to heaven” with the doctor finding out that Cena had “lady parts”. Rock then dedicates a song to the grown men who are Cena fans, singing that those fans are “walking virgins” at the age of “forty-two”. After singing a song about Cena’s mom, The Rock presents a song for the “people” as Rock asks the fans to join him in singing a modified version of “We Will Rock You”! How will John Cena respond to the sung comments of The Rock?