We’re all just victims to the wrestling bubble

It is at least comforting to know that Cena keeps his toes dipped in the contemporary media pool. The company he works for is, after all, scraping for any modicum of attention from the big boys of the mainstream. If you doubt their desperation to be accepted or even noticed, just image your little brother stripped naked, smashing eggs onto his chest and humping his teachers leg, like some kind of Tarzan omelette tossed into a brothel.

It’s easy to forget that wrestlers aren’t always the stereotypically isolated, lonely fanboys like those on the other side of the barrier. They, unlike the rest of us, have burned the N.W.O. t-shirts, used their last Pro Wrestling Illustrated magazine for their pet hamster to shit on Ole Anderson’s face, and escaped the dreaded wrestling bubble.

Yes, I said it: the wrestling bubble. A frightening experience if you ever find yourself fully engulfed in its fat, balding, lazy, black-tshirt-and-jeans-wearing grip. 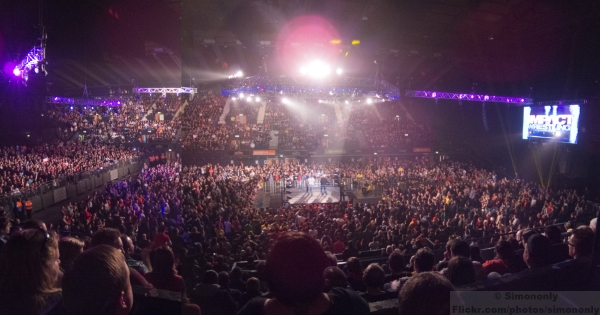 Think you’ve avoided being entrapped in its clutches? I’m sorry to report, but you haven’t. Ask yourself, has music ever surpassed the levels of Saliva, P.O.D. and Shinedown? Do you know every state in America because Raw has or will be emanating from there in due time? Are you constantly explaining to your friends who George Clooney’s new girlfriend is, using your old fanfic postings of her getting Camel Clutched by the Iron Sheik as a reference point? Would you watch more football if the Manchester derby broke out into a battle royal, or at worst a bikini dance off?

Face it; the real world isn’t real until wrestling is involved.

Before you cast your aim towards my judgemental aspersions, I too am not free of the squared circle-headed monster. You’ll never hear me break kayfabe when a friend heels it up around his girlfriend, nor will I shoot on the humanoids who believe that Johnny is only dating Jenny because Joey is banging Jimmy. Everything is a work these days; a Vince Russo masterpiece, from the lies of your business partner to the growling of your cat. What, you think she really wants your love and affection? You poor, ignorant slut; she just wants you to open the damn door. She’s working you, and you fell for it. You mark.

The art of spontaneity is dead. If the booker wants you to dance, you’ll dance. Everything is faux-reality, even so far as blatantly advertising it on TV programmes. The Only Way Is Essex owes a lot to professional wrestling and, depressingly, the rest of television will soon follow, leading the public into a brand new offshoot of society. Prepare yourself for your all new scripted life, The Truman Show with more catchphrases and elevated liver enzymes.

If you’re even thinking of escaping, don your war helmets and prepare for war. The Rock has endured years of bitterness from fans too stupid to understand why he would choose a multi-million dollar career to make movies for children without having to deal with watching Drew McIntyre wrestle. And now, Stacy Keibler is being photographed sailing on yachts with a man three times your age, half your size, and more popular with women than the morning after pill. Do you think that she really gives a Clooney about what you think? Her back is firmly turned away from the business and staring right at Hollywood Blvd. Your resentment means nothing to her. Nothing at all.

The saddest part of all this is that professional wrestling is a cult, like Scientology and whatever you call people who watch Twilight. Those within it are happy to abuse their bodies and engage in schoolyard hazing and childish politics that would put the Bullingdon Club to shame. They protect their make-believe little world and frown upon anyone who chooses to make a break for the yellow brick road. Yet, you yourself are not a wrestler; you’re only a fan. You may not call Raven by his given name, you may not give any match a star rating, and you may not judge a wrestler’s body until you’ve found your best friend laid dead in a hotel room with a half-empty bottle of tablets and a heart the size of Hulk Hogan’s Big Black Book of Bullshit. That doesn’t stop us from believing, though.

Not unlike a Twilight or Harry Potter fan, a wrestling viewer is linked vicariously through the characters, living every breath like they’re dropping pipe bombs on their year 9 geography teacher and dishing out RKOs to newly born puppies. In our hearts, we believe that we are the superstars, honing our gimmicks and shaping our new identities, much to the behest of every friend, family member and stranger on the street.

In our heartiest of hearts, we think we’re the workers. Our lives become entwined with what we see and feel on television every Monday night, desperately seeking our Wrestlemania moment whether in front of 70,000 or just three, whether inside Madison Square Garden or at the back of the bus queue. No man will ever jump the queue without facing the wrath of a Stunner, in your own mind.

In a world that seems so artificial, wrestling is our reality. We’re prisoners, you and I. We’re prisoners to the bubble. It seldom dies, no matter how much we may despair at the product. I can only hope, if it ever bursts, that we are not hanging high above the rafters without a safety net.

If the thought of that terrifies you, get ready for an almighty crash. If it made you think about Owen Hart instead, you have nothing to worry about.