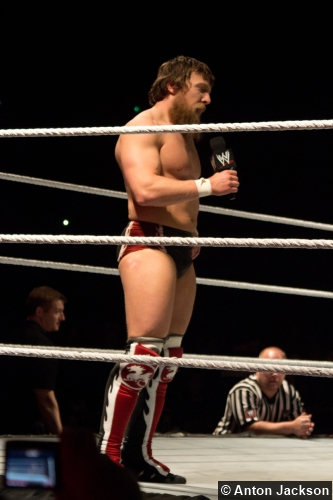 The 646th edition of WWE Friday Night SmackDown was the first SmackDown of 2012 and it came to you from the Verizon Arena in North Little Rock, AR. The first SmackDown of the New Year would be one to remember as two championships would be on the line. After cashing in his Money-in-the-Bank contract on Big Show at WWE TLC to win the World Heavyweight Title and give Big Show the shortest World Heavyweight Title reign in history, Daniel Bryan would defend the World Heavyweight Championship against “The World’s Largest Athlete” Big Show. After defeating Cody Rhodes in a non-title match on last week’s RAW, six-time World Champion and SmackDown commentator Booker T challenges Cody Rhodes for the Intercontinental Championship.

The first SmackDown of 2012 kicks off with gold on the line as Cody Rhodes defends the Intercontinental Championship against six-time World Champion and SmackDown commentator Booker T. Despite the best efforts of Booker T, Cody Rhodes was able to hit the Beautiful Nightmare Kick on Booker T en route to picking up the win and successfully retaining the Intercontinental Title. After the match, a visibly disappointed Booker T thanks the fans, who applaud the legend.

Moments after successfully retaining the Intercontinental Title against Booker T, Cody Rhodes is confronted by his brother, Dustin Rhodes, who congratulates Rhodes on his win. Cody responds by saying that he is “more of a success” than Dustin and even their Hall of Fame father, Dusty Rhodes. Cody then tells the man famously known as Goldust that, Dustin is a “joke”, but he can make his older brother into a “laughing stock”, just like he did with Booker T.

With the 25th anniversary of the Royal Rumble just four weeks away, SmackDown features an Over-The-Top Rope Challenge between Hornswoggle and Heath Slater. In the end, it was Hornswoggle getting a handful of Heath Slater’s hair to send Slater over the top rope to win the match. After the match, Slater delivers a kick to Hornswoggle, but Slater’s former tag partner, Justin Gabriel, comes out and attacks Slater, finishing it with a 450 Splash!

After debuting his new bodyguard, Comacho, last week, Hunico went one-on-one with Ted DiBiase on SmackDown. In the end, it was Hunico locking Ted DiBiase up in a unique pinning combination by using his leg to pin DiBiase’s arms to the mat and hooking the ankles of DiBiase with his arm to pick up the win!

One week after putting Randy Orton out of action by pushing “The Viper” down a flight of stairs during the Falls Count Anywhere Match, Wade Barrett appeared on SmackDown, saying that he will handle the medical update on Orton. Barrett first shows the footage of what happened last week before saying that Orton has a herniated disc in his back, adding that, as for Orton’s career, Orton is “finished” and “The Viper” is “extinct”. Barrett then turns his attention to the Royal Rumble, which takes place in Orton’s hometown of St. Louis, saying that Orton will have to watch from home as he wins the Royal Rumble Match. Barrett is then interrupted by “The Great White” Sheamus, saying that he is the biggest “problem” Barrett will face in the Royal Rumble Match. As Wade Barrett exits the ring, Jinder Mahal makes his way to the ring and gets in the face of Sheamus before slapping “The Great White”. Wade Barrett then jumps Sheamus from behind before Barrett and Mahal pummel Sheamus, but Sheamus fights back. The numbers game finally catches up with Sheamus as, with Sheamus’ attention turned to Mahal, Wade Barrett is able to hit the Winds of Change on Sheamus, leaving Sheamus in the ring. With Sheamus prone in the ring, Mahal re-enters, locking in the Camel Clutch on “The Great White”!

Backstage, SmackDown General Manager Theodore Long confronts Drew McIntyre and lets McIntyre know that, McIntyre has two strikes and, if he loses next week, then McIntyre may very well be “out”. Who will Drew McIntyre face next week and can McIntyre win?

After failing to win the WWE Tag Team Titles at WWE TLC, Primo & Epico, with Rosa Mendes in their corner, faced WWE Tag Team Champions Air Boom, Evan Bourne & Kofi Kingston, in a non-title match. In the end, Evan Bourne heads to the top rope to go for Air Bourne, but Epico pulls Primo out of the way at the last second, allowing Primo to take advantage and pin Bourne for the win.

Second-generation Divas faced off on SmackDown as the daughter of Jim “The Anvil” Neidhart, Natalya, went one-on-one with the daughter of Jimmy “Superfly” Snuka, Tamina. In the end, it was Tamina hitting the Superfly Splash on Natalya en route to picking up the win.

What did you think of the first SmackDown of 2012? Post your comments in the box below.