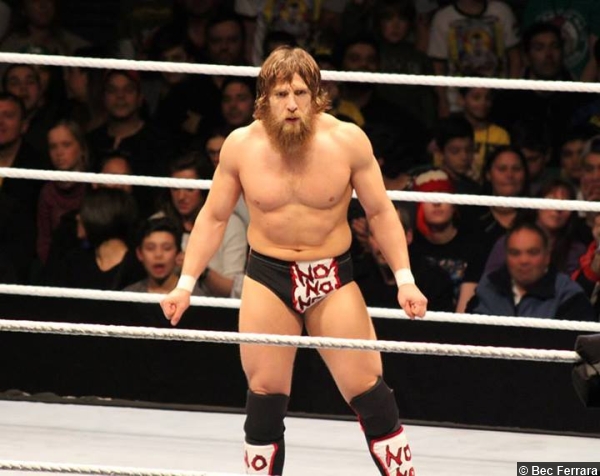 Nine nights before the 25th anniversary of the Royal Rumble, the 648th edition of WWE Friday Night SmackDown came to you from the Thomas & Mack Center at the University of Nevada-Las Vegas. On a special Sin City SmackDown, the World Heavyweight Championship was on the line as Daniel Bryan defends the World Heavyweight Title for the third week in a row, this time Bryan defends against “The World’s Strongest Man” Mark Henry. Also, after boldly challenging “The Great White” last week, Wade Barrett would go one-on-one with Sheamus.

One week after Big Show inadvertently collided with his girlfriend, A.J., and, before he defends the World Heavyweight Title against Mark Henry later in the night, Sin City SmackDown kicks off with the World Heavyweight Champion, Daniel Bryan. The champion says that it is appropriate that the show is titled, “Sin City SmackDown”, since Big Show committed a “sin” last week when Show collided with A.J. Bryan continues that Big Show ran over A.J. on purpose before saying that Big Show is “bitter” because Show’s reign as World Heavyweight Champion was the shortest in history. The champion then calls Big Show a “bitter, selfish, vengeful freak” before revealing that A.J. has suffered “head trauma and a cervical sprain” and her career may be over. Bryan continues that A.J. “insisted” on being at ringside to support him last week before saying that A.J. loves him and he has a “great admiration” for her as well, adding that she will be in his corner “in spirit” for his title defense. Bryan then says that he is “not intimidated” by Mark Henry, nor is he intimidated by Big Show, who is not even in the arena. The champion continues that he could not be held responsible for what would happen if Big Show was in the arena before telling Show to do the only “decent thing” and “just quit”! How will Big Show respond to the comments made by Daniel Bryan? Will Daniel Bryan be too pre-occupied with A.J. to be able to survive Mark Henry as the World Heavyweight Champion?

After landing on “Player’s Choice” on the Roulette Wheel, Intercontinental Champion Cody Rhodes went one-on-one with his hand-picked opponent, the pint-sized Superstar, Hornswoggle, in a non-title match. Before the match can begin, Cody Rhodes exits the ring to attack Hornswoggle before Justin Gabriel comes to the aid of Hornswoggle. After brawling with Rhodes, Gabriel challenges Rhodes to a one-on-one match and Rhodes agrees, but insists that it be a non-title match. Despite an impressive effort by Justin Gabriel, Cody Rhodes hits the Cross Rhodes on Gabriel en route to picking up the win.

Backstage, SmackDown General Manager Theodore Long is talking with Mark Henry as Henry accuses Long of putting A.J. in harm’s way before saying that the GM has also put Daniel Bryan in harm’s way. Long then spins the wheel for Mark Henry with the wheel landing on a Lumberjack Match.

After defeating Air Boom at a WWE Live Event on Sunday to win the WWE Tag Team Titles, the new WWE Tag Team Champions, Epico & Primo, with Rosa Mendes in their corner, faced Jimmy & Jey Uso in a Tornado Match, where all four Superstars are legal in the ring. In the end, it was Primo hitting the Back Stabber on Jimmy Uso en route to picking up the win for himself and Epico.

Backstage, Sheamus interrupts another tender moment between Theodore Long and Aksana before Long has Aksana spin the Roulette Wheel with the wheel landing on a Tables Match, which will be the match type when Sheamus faces Wade Barrett.

Sin City SmackDown then hosts a special Dance-Off between “The Funkosaurus” Brodus Clay and Vickie Guerrero! Vickie goes first and, after a seizure-like dance routine, Brodus Clay graciously allows his backup dancers, Cameron & Naomi go first before he lays his funky groove down. After the crowd overwhelmingly supports Brodus, Vickie offers another laughable dance routine. The festivities are then interrupted by the 2008 King of the Ring, William Regal, who pleads with the fans to not laugh at Vickie, who Regal calls a “buxom wench”. Regal then escorts Vickie out of the ring, but Brodus Clay wants Regal to take him on in a Dance-Off. After being called a “funky chicken”, Regal does his best dancing, but is laid out with the Ah, Funk It by Brodus Clay before Clay advises that somebody better call Regal’s mama!

Then it was time for the Tables Match as “The Great White” Sheamus went one-on-one with Wade Barrett, where the only way to win is to put your opponent through a table. In a hard-fought match, Sheamus was set to send Wade Barrett through a table when Jinder Mahal comes out, distracting Sheamus long enough for Barrett to take advantage, sending Sheamus crashing through a table to pick up the win. After the match, Jinder Mahal sets up another table with the intent of putting Sheamus through it, but Sheamus fights back, blasting Mahal with the Brogue Kick before slamming Jinder through the table!

Ted DiBiase was in action on Sin City SmackDown as DiBiase went one-on-one with Hunico, with Camacho in his corner, and, as determined by a spin of the Roulette Wheel, it would be a Flag Match as the American and Mexican flags are set up on poles in the corners with the winner being determined by who grabs their flag first. In the end, Ted DiBiase hits Dream Street on Hunico before climbing to the top rope and retrieving the American flag to pick up the win.

Backstage, SmackDown General Manager Theodore Long gives Drew McIntyre the bad news that he is fired, but Assistant to the General Manager, Santino Marella, says that some people are calling his victory over McIntyre a couple of weeks ago a fluke and he wants the chance to prove them wrong. Much to McIntyre’s elation, the GM allows McIntyre to face Santino in a rematch and, per the spin of the wheel, it would be a Blindfold Match.

With his job potentially on the line, Drew McIntyre went one-on-one with the Assistant to the General Manager, Santino Marella, in a Blindfold Match, where both competitors having hoods placed over their heads, unable to see anything. During the match, Drew McIntyre would take a peek from under the hood while the referee is distracted, but McIntyre still misses the mark. In the end, it was Santino using the cheers of the crowd to guide him to successfully land the Cobra Strike on McIntyre en route to picking up the win. After this loss, is Drew McIntyre’s career over?

As revealed during Sin City SmackDown, next week’s SmackDown will feature the return of former World Heavyweight Champion, “The Viper” Randy Orton! What will Orton have in store for the man who injured him in late December, Wade Barrett?

As several Superstars surround the ring, it was time for the main event as Daniel Bryan defends the World Heavyweight Championship against “The World’s Strongest Man” Mark Henry in a Lumberjack Match. During the match, Mark Henry would throw Daniel Bryan to the outside, taking out several Lumberjacks in the process. Once the champion got back to his feet, Bryan would brawl with several of the Lumberjacks before they backed him up to the apron. Shortly after this, Bryan was able to knock Henry to the outside, where the Lumberjacks tried their best to hoist Henry back into the ring. However, Daniel Bryan would incite a riot by kicking at several of the Lumberjacks, provoking them to come into the ring and attack both participants. This leads to the match breaking down into absolute chaos with all the Lumberjacks in the ring, brawling with each other and the match participants. As the melee continues among the Lumberjacks, Daniel Bryan grabs the World Heavyweight Title belt and sneaks to the backstage area. However, Bryan is confronted by SmackDown General Manager Theodore Long, who informs Bryan that, in nine nights at the Royal Rumble, Daniel Bryan will defend the World Heavyweight Championship against “The World’s Largest Athlete” Big Show and “The World’s Strongest Man” Mark Henry in a Triple Threat Match inside a Steel Cage! Is there any way that Daniel Bryan can survive two vengeful giants when he is locked inside a Steel Cage with his title on the line?