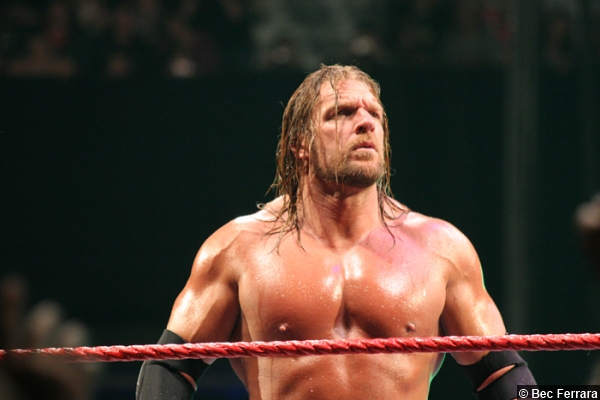 The bell tolls for “The Game”.

One night after the 25th anniversary of the Royal Rumble, the 976th edition of WWE Monday Night RAW was a RAW SuperShow and it came to you, live, from the Sprint Center in Kansas City, MO. After making questionable decisions in his tenure as Interim General Manager of RAW, which includes allowing Zack Ryder to compete despite not being medically cleared, being indirectly responsible for Ryder’s destruction at the hands of Kane, costing CM Punk his matches on multiple occasions, and attacking WWE Legend Mick Foley, the WWE Board of Directors has officially put John Laurinaitis’ status as the Interim GM under review with the Chief Operating Officer of the WWE, Triple H, returning to RAW to perform the job evaluation for Laurinaitis. Also, after entering at number 22 and last eliminating Royal Rumble Match veteran Chris Jericho to win the 2012 Royal Rumble Match, “The Great White” Sheamus has a guaranteed shot at either the WWE or World Heavyweight Championship at WrestleMania XXVIII, but which title will Sheamus choose to challenge for?

After surprising everyone by calling the WWE Title right down the middle as an impartial Special Referee at the Royal Rumble, a cheerful Interim RAW General Manager John Laurinaitis kicks off the show. After shaking hands with fans and employees, Laurinaitis says that every successful man has made “mistakes” before saying that he is confident that he will be named the permanent General Manager of RAW following his job evaluation. Laurinaitis continues that, at the Royal Rumble, he did what he said he would do and call it right down the middle. The GM then announces that, in three weeks at WWE Elimination Chamber, CM Punk will defend the WWE Championship against Dolph Ziggler, The Miz, R-Truth, Kofi Kingston, and Chris Jericho in an Elimination Chamber Match. Laurinaitis then announces that, on RAW, Beth Phoenix will defend the Divas Title against Eve, Kofi Kingston will go one-on-one with The Miz, and Dolph Ziggler will square off against “The Viper” Randy Orton. The GM then announces a huge main event as, for the first time ever, WWE Champion CM Punk goes one-on-one with World Heavyweight Champion Daniel Bryan.

John Laurinaitis is then interrupted by WWE Champion CM Punk, who starts singing goodbye to Laurinaitis, letting fans, RAW commentator Jerry Lawler, and ring announcer Justin Roberts join in before singing to the face of Laurinaitis. The GM responds by saying that the WWE Champion owes him an “apology” since he did not cost Punk the title at the Royal Rumble, adding that he is a man of his word. Punk then says that Laurinaitis is not a man of his word, unless that word is “patsy”, “ham sandwich”, or “dork”. Punk continues that he came out there to see Laurinaitis’ face for one last time before the GM is fired by Triple H. Punk then says that Laurinaitis has entertained him by not having any idea how to speak into a microphone, how Laurinaitis stumbles over the simplest of words like he has no grasp on the English language, and, most of all, how the GM has managed to both “suck” and “blow” at the same time. The champion then admits that he is not the biggest supporter of Triple H, but he cannot wait for the COO to kick Laurinaitis’ “lanky carcass”. Laurinaitis responds by saying that he is not going to take anything Punk says “personally” because it is all just “business” and that is what the WWE Board of Directors is all about. The GM continues that the Board of Directors know that he has taken the WWE Championship and RAW to “new heights”. Laurinaitis then extends his hand to Punk, offering to put everything behind them and start anew. Punk tells Laurinaitis that the only reason he should be extending his hand is if he wants to “go to sleep.”

Things are then interrupted by the World Heavyweight Champion, Daniel Bryan, who says that “nobody cares” about the personal problems between CM Punk and John Laurinaitis. Bryan continues that, while Punk and Laurinaitis were living out their “soap opera” last night, he was busy winning a Triple Threat Steel Cage Match against Big Show and Mark Henry to retain his title. Bryan then says that, compared to what he went through at the Royal Rumble, CM Punk is not much of a challenge. Punk responds by saying that he is “only the best wrestler in the world”, but Bryan says that he is a “role model” and a “vegan”. Punk says that he knows Bryan is a vegan, but asks what Bryan does eat. Bryan responds by asking how it would be if he shoved Punk’s “pipe bomb” where the “sun don’t shine.” Punk says that they have been friends for ten years and Laurinaitis is just trying to stir up trouble between them before saying that they should put on the “best wrestling match in the world.”

Another interruption brings the winner of the 2012 Royal Rumble Match to the ring as “The Great White” Sheamus comes out, reminding everyone that he is the winner of 2012 Royal Rumble Match. Sheamus then reminds CM Punk and Daniel Bryan will both be defending their titles at WWE Elimination Chamber before reminding everyone that he has earned the right to challenge for either the WWE or World Heavyweight Title at WrestleMania XXVIII. Sheamus then tells Laurinaitis that he hopes Triple H kicks him in the “arse” so hard that he throws up his “lace undies”. Sheamus then makes his exit as Punk and Bryan shake hands in the middle of the ring. What will happen when CM Punk and Daniel Bryan go one-on-one for the first time ever? Which champion will Sheamus face at WrestleMania?

With Wade Barrett watching from a luxury skybox in the arena, answering questions from Josh Mathews, “The Viper” would compete on RAW for the first time in a month as Randy Orton went one-on-one with Dolph Ziggler, with Vickie Guerrero in his corner. In the end, it was Randy Orton hitting the RKO on Dolph Ziggler en route to picking up a hard-fought win. What will happen this Friday night on SmackDown when Randy Orton goes one-on-one with Wade Barrett?

Then it was time to get funky as “The Funkasaurus” Brodus Clay went one-on-one with Tyler Reks. In the end, it was Brodus Clay hitting What The Funk on Tyler Reks en route to picking up the win.

Then it was time for the Champion vs. Champion Match as, for the first time ever, WWE Champion CM Punk went one-on-one with World Heavyweight Champion Daniel Bryan. In the middle of a stellar match, Chris Jericho comes out of nowhere, pulling Daniel Bryan out of the ring and throwing him into the barricade, bringing an end to the match with Bryan winning via disqualification. Jericho then enters the ring and lays CM Punk out with the Codebreaker! What is the reason behind Chris Jericho’s sudden attack on the WWE Champion?

The latest inductee into the 2012 WWE Hall of Fame was announced on RAW as none other than boxing legend, pop culture icon, and crucial part of WrestleMania XIV when Stone Cold Steve Austin faced Shawn Michaels for the WWE Title, “Iron” Mike Tyson, will join Edge, Mil Mascaras, and The Four Horsemen in the 2012 WWE Hall of Fame the night before WrestleMania in Miami!

After having to witness the destruction of her boyfriend, Zack Ryder, at the hands of Kane last week and at the Royal Rumble, Eve challenged Beth Phoenix for the Divas Title on RAW. With her thoughts clearly with Zack Ryder, Eve was no match for Beth Phoenix as Phoenix quickly hits the Glam Slam on Eve en route to picking up the win and successfully retaining the Divas Title. After the match, Kane appears on the Tron, saying that everything that has happened to Zack Ryder is because of John Cena and, until Cena learns to “embrace the hate”, he can never beat Kane and he will never beat The Rock at WrestleMania. Kane continues that he will continue to inflict as much punishment on Zack Ryder until Cena gets the message and he is going to use Eve as a “conduit” to get the message across. With that, Kane’s music hits, but Kane appears behind Eve! As Kane stalks Eve in the ring, John Cena quickly makes his way to the ring as a brawl breaks out between Cena and Kane. A fired up John Cena throws Kane into the steel steps before repeatedly smashing Kane’s head into the steps. Cena then takes the steps apart before repeatedly smashing the face of Kane with the steel steps. A crazed Cena then takes apart the announce table before popping Kane in the head with a microphone. Cena then hoists Kane up in the Attitude Adjustment, but Kane manages to fight out of it, making a quick escape through the crowd.

After making countless questionable decisions in his tenure as General Manager, it was then time for the job evaluation for Interim RAW General Manager John Laurinaitis as Laurinaitis will have his evaluation conducted by none other than WWE COO Triple H. John Laurinaitis states that he knows that he has done well as the General Manager and the fans appreciate it. Laurinaitis continues that the ratings for RAW have been up since he has been in charge before saying that there is a performance review that every WWE employee undergoes where they rate themselves on a scale of 0-5 before saying that he gives himself all fives! However, Laurinaitis is interrupted by the arrival of the Chief Operating Officer of the WWE and thirteen-time World Champion Triple H. Triple H says that he has been watching Laurinaitis since he “backstabbed” him to get the job and he actually thought Laurinaitis might do a good job and, like others before him, he is “spineless” and “not very swift”. Triple H continues that Laurinaitis tried to use his power as Interim General Manager to try and make himself a “star”. Triple H then said that, when Vince McMahon ran RAW, he had to be replaced and so did Triple H, all over getting personally involved. Triple H says that Laurinaitis did the same, but Laurinaitis says that he will do “anything” to keep his job. Triple H then asks Laurinaitis to apologize to the WWE fans and, if the fans support him, then he might reconsider his stance. Barely audible over the boos from the fans, Laurinaitis apologizes to the fans, but the fans roar their disapproval. Triple H then gets the idea to make Laurinaitis a WWE Superstar and have any Superstar come down and “have a whack” at him in a Gauntlet Match.

Triple H then takes a page out of his father-in-law, Vince McMahon’s playbook by suggesting that John Laurinaitis join the infamous “club” started by Vince McMahon. Ready to kiss the rear end of Triple H, Laurinaitis puts Chap Stick on and gets on his knees, but Triple H says he would not let Laurinaitis’ lips anywhere near him because he does not know where they have been. Triple H then says that he is not out there to do any of those things before saying that the WWE Board of Directors have let him know that anytime he wants to come back and run RAW, he can do so. Triple H then says that it warms his heart to wish John Laurinaitis well on his…