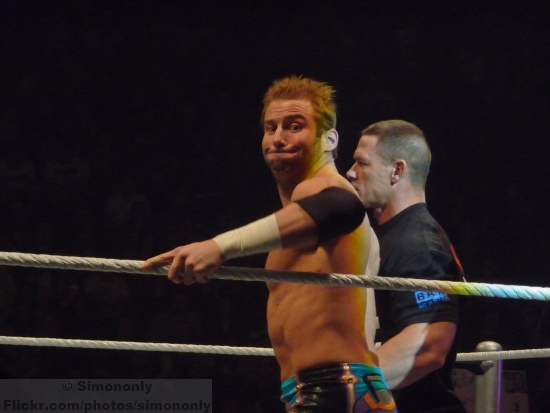 The 972nd edition of WWE Monday Night RAW was the first RAW SuperShow of 2012 and it came to you, live, from the FedExForum in Memphis, TN. After being cheated by Interim RAW General Manager John Laurinaitis in the Gauntlet Match last week, allowing Dolph Ziggler to become the #1 Contender, the first RAW of 2012 would see CM Punk defending the WWE Championship against former United States Champion Dolph Ziggler. Behold the power will come vengeance to render his anger with fury. The deception the weak have perpetrated will be castigated. The second day of 2012, the prophet will emerge and destroy the weak. It will be the end of the world as you know it.

One week after being told by Kane to “embrace the hate coming from the WWE fans, the first RAW of 2012 kicks off with John Cena. Cena admits that 2011 may not have ended the way he wanted, but it is a “new day”. Cena wishes everyone a happy New Year before saying that he is going to make some “changes” to himself in 2012. Cena then names his New Year’s Resolutions, saying he vows to wear less underwear, ban his father from television, and, most importantly, beat The Rock at WrestleMania. Cena continues that he will remain who he is and his convictions will remain true, adding that the words, “hustle, loyalty, and respect” will not be faltered by flames. Cena then says that he is in “no place to judge” what the fans have to say because it is within their rights to express themselves freely. Cena continues that his “disappointment” is in Kane as Kane wants him to turn his back on the fans, but he says he will never turn his back on the fans. Cena then says he is just like every WWE Superstar who knows that there is “nothing better” than being in the ring in front of the fans, adding that he will “enjoy” any response from the fans before thanking the fans. Cena is then interrupted by the music of “The Big Red Monster” Kane as the voice of Kane vows that Cena will know the “true meaning of hate tonight”! What does Kane mean by these cryptic words? What does Kane have in store for John Cena?

Backstage, The Miz confronts Interim RAW General Manager John Laurinaitis, who calls R-Truth’s attack on The Miz last week “unprofessional”. After being surprised that the GM does not have more to say about the attack, Laurinaitis shows Miz the footage of Miz attacking R-Truth two months ago, but Miz does not see why R-Truth want to attack him. Laurinaitis then informs The Miz that he will be going one-on-one with Sheamus and Miz says he will be a “sitting duck” out there with Laurinaitis saying that it is better than being a “lame duck”. Miz then storms out of the GM’s office, screaming that he will not be a sitting duck. R-Truth then emerges, doing his best duck impersonation.

Three nights after taking Randy Orton out of action with a shove down the stairs, leaving Orton with herniated discs in his back, Wade Barrett was in action on RAW, but before his match, Barrett says that he does not care about anyone else’s New Year. Barrett then says that his 2012 is off to a great start because it is devoid of Randy Orton. Barrett continues that he did not intend to push Orton down the stairs, but it was either him or Orton, adding that Orton is just another “victim”. Barrett then proclaims he is looking forward to winning the 30-Man Royal Rumble Match before he is interrupted by Barrett’s opponent, Santino Marella. Santino reminds Barrett that he lasted longer in the Royal Rumble Match than Barrett and, this year, he is going to win the Rumble Match.

As he continues to watch his back for R-Truth, The Miz went one-on-one with “The Great White” Sheamus on RAW. However, The Miz does not allow the match to begin as Miz immediately jumps Sheamus, but Sheamus fights back with countless shots to the chest before The Miz flees into the crowd. R-Truth then appears in the crowd and says that “little Jimmy” says that The Miz needs to get “got”. Miz then jumps back over the barricade to try and escape R-Truth, but is caught with the Brogue Kick by Sheamus! Truth then grabs a water bottle, smashing it on the skull of The Miz.

Then it was time for the WWE Championship to be on the line as the 2011 Superstar of the Year CM Punk defends the WWE Title against “The Show-Off” Dolph Ziggler, with Vickie Guerrero in his corner. During the match, a turnbuckle pad is inadvertently pulled off by CM Punk, but as Punk sets up for the GTS on Dolph Ziggler, Interim RAW General Manager John Laurinaitis makes a timely entrance. The GM proceeds to argue with the referee about the removed turnbuckle while Dolph is tapping out to the Anaconda Vice behind the referee’s back. Punk then confronts Laurinaitis, but spots on oncoming Dolph Ziggler as Punk dodges a shot that is instead taken by the GM! Punk then hoists Dolph up for the GTS, but Dolph fights back and, as Dolph sends Punk into the ropes, Laurinaitis pulls on the top rope, resulting in the WWE Champion flying to the outside! CM Punk was then unable to make the ten-count, giving Dolph the victory via count-out, but keeping the WWE Title with CM Punk. Despite this, Dolph Ziggler takes the WWE Title belt, celebrating as if he won the gold. How will CM Punk respond to John Laurinaitis interfering in his match two weeks in a row, costing him a victory?

The Divas were in tag action on RAW as Kelly Kelly & Eve faced The Bella Twins. In the end, it was The Bella Twins pulling the switch they call Twin Magic, allowing the illegal Bella to roll Eve up to pick up the win.

You have brought this upon yourself. A familiar force shall arrive to claim what is his. She holds the mystery of my rebirth. For when I beckon her, I will return to claim what is mine. She has spoken. It is time. The end of the world as you know it is here. Now.

With those chilling words, the arena appeared to shake before the lights in the arena go out. A figure then stands in the entrance way with his arms outstretched before pyro ignites and reveals the return and the rebirth of “Y2J” Chris Jericho! After an overjoyed reunion with the fans at ringside, the first Undisputed WWE Champion in history takes the time to enjoy every moment of his return. Despite holding a microphone, Chris Jericho feels that there is nothing that needs to be said as the former World Heavyweight Champion drops the microphone in the center of the ring before taking a run around ringside, greeting more fans and keeps on greeting them and soaking in their reactions before making his exit, having said nothing.

Then it was time for the main event as John Cena teams with “The World’s Largest Athlete” Big Show and United States Champion Zack Ryder to face the team of “The Big Red Monster” Kane, “The World’s Strongest Man” Mark Henry, and “The All-American American” Jack Swagger in a 6-Man Elimination Tag Match. However, as five of the six competitors await the arrival of Kane, smoke arises from the stage, but there is no Kane. Instead, the legal counsel for John Laruinaitis, David Otunga, comes out informs the referee that Kane has decided not to participate in the match, making the match a 3-on-2 Handicap Elimination Match! During the match, Big Show and Mark Henry face off, but Henry escapes to the outside of the ring, grabbing a steel chair. However, Show knows the chair out of Henry’s hands before waffling Henry on the back with the chair, leaving the referee no choice but to disqualify both men!

Going it alone against John Cena and United States Champion Zack Ryder, Jack Swagger had little chance to survive long as Cena plants Swagger with the Attitude Adjustment en route to picking up the win for himself and Ryder. After the match, the music of Kane hits and, this time, Cena exits the ring to meet Kane on his way to the ring. However, Kane emerges through the ring mat, taking out an unsuspecting Zack Ryder before knocking Cena off of the apron with a right hand. Then, on the outside of the ring, Kane puts his gloved hand over the nose and mouth of Cena, suffocating Cena and rendering him unconscious just like he did two weeks ago. Kane then turns his attention back to Zack Ryder as Kane stalks the United States Champion, grabbing the leg of Ryder. “The Big Red Monster” then tries to drag Ryder down through the hole in the ring, but Cena manages to rescue Ryder moments before flames erupt from the open space in the ring! As smoke billows from underneath the ring, Cena looks on in sheer disbelief of what just transpired.

What did you think of the first RAW of 2012? Post your comments in the box below.