Beginning life as Vengeance back in 2001, it wasn’t until the 2007 edition that the Night of Champions moniker was used. Known as Vengeance: Night of Champions, the show was so called due to every match on the card being a championship contest (this was also the PPV that Chris Benoit no-showed due to a “family emergency.” Little did we know when watching at the time what that actually meant). The following year, the subtitle became the name for the PPV and the Vengeance was no more.

However, as with the 2010 edition, there would be a non-championship match on the card (although, technically, it did have a title at stake). Even more damaging to the credibility of the event and its entire gimmick, this non-title match actually headlined the PPV, technically making it seem more important than every championship in WWE.

Regardless, the rest of the card does have every current title on the line, so the potential for a change in the WWE landscape was immense… but would the reality follow suit or would all the belts stay where they are? In essence, would it be a night for the challengers or a NIGHT OF CHAMPIONS? 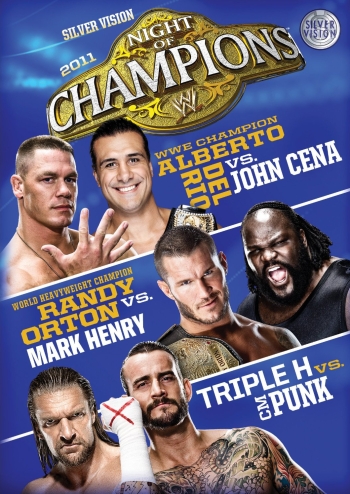 There are many unwritten rules of professional wrestling and one of them is “always open a PPV with a high-octane match to get the crowd into things early”. Go back and check the through the annals of wrestling history and you’ll find that most pay-per-view events start of with something energetic. At this event last year, that match was Dolph Ziggler v Kofi Kingston and it lived up to expectations. This year, Mr. Kingston is back in that spot alongside Evan Bourne (as Air Boom) to defend the tag-team titles.

The Awesome Truth were a fantastic odd-couple team that played off each other (and the “craziness” of R-Truth) very well. On the other side, the combo of Kofi and Evan were the perfect high-energy face team to oppose them. In the vein of The Rockers and The Rock ‘n’ Roll Express, they’re the ideal babyface duo and the prospect of a match between the four was a good one.

It also helps that they were given a decent amount of time (for an opener) to tell a story inside the ring. What didn’t help was Michael Cole bigging up the titles by reminding us of the great teams to have held the tag-titles in WWE… only to overlook genuine greats like The Hart Foundation, Demolition, LOD, The Bulldogs, etc, and list teams like Edge & Mysterio, Jerishow and DX instead. The opener is really good and continued the better-than-expected run WWE had in 2011. Great action, great near-falls and a well-worked finish that kept both teams strong going forward.

Following on from that, the once prestigious Intercontinental Championship was on the line as former Legacy partners go at it in the shape of Cody Rhodes and Ted DiBiase. The former really came into his own with the “Dashing” gimmick and took it to another level with the darker masked version. More could’ve been done with it, but bringing back the classic IC belt was a great move and at this exact moment, I have high hopes that Cody Rhodes will take a step up and reach the main-event by the end of the year.

DiBiase, on the other hand, has so much potential, but hasn’t really done anything with it. Glimmers did appear, mainly in his match against Orton while part of Legacy where Randy had decreed Ted couldn’t fight back. DiBiase’s performance in that match AND the way the fans got behind him could’ve been the catalyst for a great face run, but it wasn’t to be. Going into NoC, the rehabilitation of DiBiase was under way once again (another great match against Orton a few weeks prior was an almighty showing in defeat) and the rivalry with Rhodes gave him some more exposure too.

The match was a great 10min encounter that could’ve been better had DiBiase been given more time on offence. He’s started to put together some nice signature moves (e.g. sit-out spinebuster, Shinsuke lariat and Busaiku Knee Kick) and a little run of wins could do Ted a great service.

In a slightly ironic moment, the match with the most opponents was also the shortest match on the card. My pick for the next great break-out main-eventer, Dolph Ziggler (who has really stepped up his game in the last six months), defends his US title against stable-mate Jack Swagger, Alex Riley (the forgotten man) and John Morrison (the released man).

With just over 8mins to play with, four of the more athletic young guys on the roster didn’t take a break for a second, so the action was just frenetic from bell-to-bell. Some of the spots were brilliant, but exchange of the night was Morrison’s sit-up top-rope German suplex to Riley while he was stuck in the Tree of Woe. The last minute was amazingly good.

Following the young guns, it was the turn of one of the longest-tenured wrestlers on the roster to finally fulfil his potential as Mark Henry earns a World Heavyweight Championship match after the greatest run of his career to date. His entire Hall of Pain gimmick is a simplistic work of genius and Mark has the perfect mix of size, genuine intimidation factor and ability to cut the promo he needs to cut to pull it off. Orton also does a tremendous job as his opponent and Mark Henry showed the doubters that he can work non-squashes to the level required.

It was a nice change of pace after the high-octane four-way and Mark Henry’s post-match promo was a thing of greatness (as was his “Yours is fake, mine’s is real” jibe to a fan at ringside). It’s always nice to see someone rise to the top after working hard to get there and, in 2011, very few worked harder than Mark Henry to establish their character’s direction.

The remaining matches on the card were really good too. Kelly Kelly has really grown as a performer (it’s amazing to think she’s at this level after her shambolic debut striptease on ECW) and Beth Phoenix is a great opponent for her in regards to diametric opposites. They put together a commendable 10min encounter that was highlighted by a truly stunning top-rope superplex. A pat on the back for all four women involved in this match as they really excelled themselves (in comparison to the normal effort WWE allows the women to compete under).

All through the night, Michael Cole wasn’t that annoying and did a good job of explaining the history behind most of the titles as each match began. Prior to the WWE Championship match though, the ever-dependable WWE Production Unit put together a really wonderful video chronicling the history of the belt, the men who have wore it over the decades and segues it brilliantly into the importance of the match between Cena and Alberto Del Rio.

John Cena, even now, doesn’t get the credit he deserves as an in-ring worker. He’s easily the best “main event” wrestler in the company today and going into this match he had just contested three great bouts with CM Punk in as many months. Alberto, on the other hand, was on fire at the start of the year, but his loss to Edge at WrestleMania did so much damage to his credibility, I genuinely don’t think he’s recovered to this day. The match itself is pretty damn good, with counters and exchanges that showed off both men. Even the finish had Cena apply an STF that actually had no daylight showing, which is a minor miracle in itself. The only problem with the match is that the wrong guy left with the belt.

Closing the show, we are treated to a near-25min main-event between CM Punk and Triple H that, unfortunately, had the outcome telegraphed due to the weak-ass stipulation. That being said, Punk kicking out clean from a Pedigree (actually his second Pedigree) helped protect him, as did the actual finish to the match, so it wasn’t as bad as it could’ve been. Punk has, in my eyes, firmly established himself at the top of the card and it’s not before time either.

They make full use of the No-DQ side of things and there are some great moves throughout (including a stunning elbow from the top through the announce table). The only real issue I have with the whole final third is when R-Truth stops CM Punk’s pinfall attempt on Triple H when the entire reason they he and Miz came out was to make sure Hunter didn’t win.

It really made literally no sense when, only a few minutes earlier (with both participants out cold), R-Truth and Miz placed Punk across Triple H in the hope of eliminating the COO. It left a slightly flat taste in my mouth when the match ended, but the previous 20+ minutes were top-drawer, so it’s best to focus on that.

A single extra on the disc is from Smackdown a few weeks prior when Hunter and Punk had their contract signing angle. It’s decent enough, but if you saw it on TV, there’s nothing really to entice you back for a second helping.

Unlike last year, when SummerSlam was such a bust that Night of Champions didn’t have much to live up to, 2011’s version had to follow on from the frankly amazing Summer of Punk that included the MOTY at Money in the Bank and the almost as good rematch from SummerSlam between CM Punk and John Cena.

Almost all of the winners made sense (whether you agreed with them or not) and the matches were all of a good-or-better standard. Stand-outs are the main-event, the four-way and Henry v Orton, with me being left genuinely happy with the outcome of the latter.

Another aspect to look as that 24 wrestlers were involved in the card for various reasons and only three of them (Cena, Triple H and Orton) would really be considered “the old guard”. Sure, Christian and Mark Henry have been around for a long time, but not at the top of the WWE table, so it’s heartening to see a card filled with newer prospects. All it takes is three or four of them to genuinely break out and become the next long-term headliners.

Ziggler, Sheamus, Punk, Cody and Alberto all have genuine shots to make that role their own.

Also, if you buy the Blu-Ray edition, you get the following  from the preceding week’s TV shows -: