WWE Tribute To The Troops 2011 Results 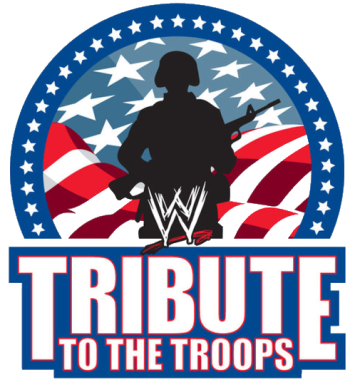 The ninth annual WWE Tribute to the Troops came to you from Fort Bragg in Fayetteville, NC and featured the Superstars and Divas of the WWE, as well as stars of film and television. The ninth installment of the Tribute to the Troops featured performances by the Grammy Award-winning band Nickelback, Grammy Award-winning R&B singer Mary J. Blige, and legendary comedian George Wallace. Tribute to the Troops also featured special greetings from The Muppets, Nicole Kidman, Hugh Jackman, Matthew McConaughey, Bradley Cooper, & Robin Williams, as well as a special appearance by “Miss USA” Alyssa Campanella. In addition to these appearances, EXTRA’s Maria Menounos would step into the ring to compete in front of the troops at Fort Bragg. Five nights before their respective matches at WWE TLC, WWE Champion CM Punk teams with ten-time former WWE Champion John Cena and “The World’s Largest Athlete” Big Show to face the team of World Heavyweight Champion Mark Henry, The Miz, & “The Mexican Aristocrat” Alberto Del Rio in a huge 6-Man Tag Match.

Five nights before they square off in a Tables Match at WWE TLC, the opening match saw “The Viper” Randy Orton going one-on-one with Wade Barrett. In the end, the action spilled to the outside with both men brawling to the point of both Orton and Barrett getting counted out. After the match, Wade Barrett sent Randy Orton shoulder-first into the steel steps before bringing a table out from under the ring. Barrett then retrieves Orton and rolls him into the ring before setting the table up. However, Orton fights back with a dropkick to Barrett before setting his sights on the table, but just as Orton is set to powerbomb Barrett through the table when David Otunga attacks Orton from behind. Orton recovers from the attack and hits the RKO on Otunga, but Orton was not through with the Harvard Law graduate as, in a clear message to Barrett, Orton powerbombs Otunga through the table! Is this the fate that awaits Wade Barrett this Sunday at WWE TLC?

Then in the first performance of the night, the Grammy Award-winning band Nickelback perform the hit theme song of Monday Night RAW, “Burn It To The Ground”!

Five nights before he challenges Dolph Ziggler for the United States Title at WWE TLC, “The Long Island Iced Z” Zack Ryder went one-on-one with “The All-American American” Jack Swagger, with United States Champion Dolph Ziggler in his corner, but before the match begins, Zack Ryder brings a very special “broski” to be in his corner, Hall of Famer Sgt. Slaughter. During the match, Jack Swagger throws Zack Ryder to the outside, allowing Dolph Ziggler to get a cheap shot in behind the referee’s back, but Sgt. Slaughter does not let it fly as Slaughter clotheslines the United States Champion over the announce table before being taken down by Swagger. Back in the ring, Jack Swagger goes for a big splash on Zack Ryder, but Ryder dodges before hitting the Rough Ryder Leg Lariat on Swagger en route to picking up the win. After the match, Sgt. Slaughter gets his payback by locking in the legendary Cobra Clutch on “The All-American American”!

The Divas were in action on Tribute to the Troops as former Divas Champion Kelly Kelly teams with Eve, Alicia Fox, and their celebrity partner, EXTRA’s Maria Menounos to face Divas Champion Beth Phoenix, Natalya, & The Bella Twins in an 8-Diva Tag Match. In the end, it was Maria Menounos catching Beth Phoenix by surprise with a sunset flip roll-up to pick up the upset win for her team.

Legendary comedian George Wallace then makes a special appearance at Tribute to the Troops to perform in front of Fort Bragg as Wallace gives his take on Holiday traditions before revealing that all military personnel can come see his show in Las Vegas for free in 2012!

Five nights before he comes out of retirement to challenge Cody Rhodes for the Intercontinental Title at WWE TLC, six-time World Champion Booker T comes out to help call the action at ringside as “Mr. Money-in-the-Bank” Daniel Bryan goes one-on-one with Intercontinental Champion Cody Rhodes, sporting a black eye from his brawl with Booker T on SmackDown, in a non-title match. During the match, the action spills to the outside where Cody Rhodes throws Daniel Bryan into the announce table. Shortly after this, Cody Rhodes taunts Booker T, but when the referee is tending to Daniel Bryan, Booker delivers a right hand to Rhodes, allowing Bryan to roll Rhodes up to pick up the win. After the match, Cody Rhodes dares Booker T to come in the ring and the legend complies, leading to a brawl between champion and challenger with Booker getting the better of the situation. However, the Intercontinental Champion would rush the ring again, this time getting slapped by the six-time World Champion! What will happen this Sunday at WWE TLC when these two square off with the Intercontinental Title on the line?

In an encore performance by Nickelback, the multi-Platinum band performs their newest single “When We Stand Together”, the theme song of the 2011 WWE Tribute to the Troops.

Still recovering from an ankle injury, the neck-braced Christian appears on Tribute to the Troops on crutches as Christian states that he is there to support and represent the Canadian Army. Sheamus then interrupts, scaring Christian backstage as “The Great White” is in action as Sheamus went one-on-one with Drew McIntyre. In the end, it was Sheamus blasting Drew McIntyre with the Brogue Kick en route to picking up the win.

In her second performance of the night, Mary J. Blige performs her classic hit, “Family Affair”! Then it was time for the huge main event as WWE Champion CM Punk teams with John Cena and “The World’s Largest Athlete” Big Show to face the team of World Heavyweight Champion Mark Henry, The Miz, & Alberto Del Rio in a 6-Man Tag Match. At the end of a chaotic 6-Man Tag Match, it was Big Show delivering a chokeslam to Alberto Del Rio, CM Punk delivering the GTS to The Miz, and Big Show delivering the W.M.D. to Mark Henry, allowing John Cena to hoist the World Heavyweight Champion up and deliver the Attitude Adjustment en route to picking up the win for his team. The show then comes to a close with the Superstars and Divas of the WWE standing on the stage while John Cena delivers a special speech to the troops in attendance before everyone comes to ringside to meet and greet the troops and their families.

What did you think of the 2011 WWE Tribute to the Troops? Post your comments in the box below.