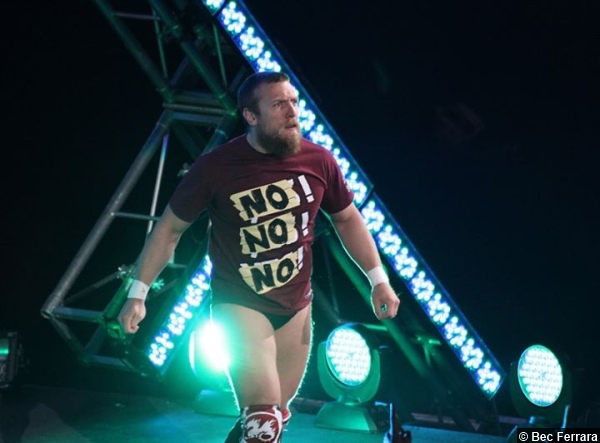 Five nights after a shocking WWE TLC, the 644th edition of WWE Friday Night SmackDown came to you from the Richmond Coliseum in Richmond, VA. At WWE TLC, Big Show soundly defeated Mark Henry in a Chairs Match to win his first World Title in nine years by capturing the World Heavyweight Championship, but a post-match assault by Mark Henry that ended with a DDT on a steel chair provided the perfect opportunity for Daniel Bryan to cash in his Money-in-the-Bank contract moments before pinning Big Show to become the new World Heavyweight Champion, making Big Show’s reign as champion the shortest in history! How will the gargantuan former champions, Big Show and Mark Henry, respond to Daniel Bryan cashing in and becoming the new World Heavyweight Champion?

Five nights after defeating Mark Henry in a Chairs Match at WWE TLC to become the new World Heavyweight Champion only to have Daniel Bryan cash in his Money-in-the-Bank contract mere seconds later to take the title away from him, SmackDown kicks off with “The World’s Largest Athlete” Big Show. Big Show says that he really thought he would be kicking off the show as the World Heavyweight Champion, but he is not and Daniel Bryan. Show continues that he “scratched and clawed” for nine long years to become a World Champion again and he was so proud to be the new champion at WWE TLC, having survived Mark Henry. Show says that there are a lot of feelings he has right now, disappointment, anger, shock, rage, and confliction. Big Show then recalls his interview on RAW where Josh Mathews reminded him that he will go down in history as having the shortest reign as World Heavyweight Champion ever. Show continues that he is “proud” of himself for not going over the edge.

As Big Show is ready to give his “honest feelings”, he is interrupted by the former World Heavyweight Champion as “The World’s Strongest Man” Mark Henry makes his way to the ring. Mark Henry asks Big Show what Show is “proud” of, adding if Show is proud of having the shortest reign as World Heavyweight Champion in history. Henry tells Show that Show feels “embarrassed” and “humiliated” before saying that Show should take a week off and “quit the business”. Henry continues that Big Show could get a job as Santa Claus before saying that he is out there to get his rematch for the World Heavyweight Title.

Five nights after defeating Dolph Ziggler to finally win the United States Title, the new United States Champion Zack Ryder went one-on-one with the man who successfully defeated a less-than-100% Booker T at WWE TLC, Intercontinental Champion Cody Rhodes, in a Champion vs. Champion Match. During the match, the action between the two champions spilled to the outside, where Rhodes deliberately shoves Ryder into Booker T. Later on in the match, Booker T stands up on the announce desk and decides to sing a Christmas song, which distracts Rhodes long enough for Ryder to take advantage, hitting the Rough Ryder Leg Lariat en route to picking up the win. After the match, Booker has one last verse for Rhodes as Booker sings that “Cody with your nose so bright, you just got beat down tonight, sucka!” How will Cody Rhodes respond to Booker T costing him the match?

After squaring off in a Chairs Match for the World Heavyweight Title at WWE TLC, “The World’s Largest Athlete” Big Show went one-on-one with “The World’s Strongest Man” Mark Henry with the winner being named the #1 Contender for the World Heavyweight Championship. However, before the match can begin, the Harvard Law graduate from RAW, David Otunga, interrupts. Otunga states that he is the legal counsel for Interim RAW General Manager and Executive Vice President of Talent Relations John Laurinaitis. Otunga continues that Laurinaitis is responsible for the well-being of “all WWE Superstars” before revealing that Mark Henry is not cleared to compete due to further injuries to his ankle. Otunga that announces that the #1 Contender’s Match will not take place and Big Show responds by jacking the jaw of Otunga with the W.M.D.! With Mark Henry apparently unable to compete, how will this affect the naming of a new #1 Contender?

Backstage, SmackDown General Manager Theodore Long is confronted by RAW Superstar The Miz as Miz was, apparently, told to be in the arena for SmackDown. The GM informs Miz that he did not call for Miz to be there and Miz responds by saying that Interim RAW GM John Laurinaitis is running circles around Long and that, since he became the WWE Champion last year, RAW has been in the main event of every pay-per-view. Miz continues that he is going to walk out to the ring and “disrupt” SmackDown and will stay out there, preventing the show from continuing. Long argues otherwise and Miz challenges Long to find anyone to face The Miz. Who will Theodore Long find for The Miz to face?

After failing to win the WWE Title in a Triple Threat TLC Match at WWE TLC, The Miz appears on SmackDown as Miz asks if Theodore Long cannot find anyone with the guts to face him before The Miz introduces footage of him taking out both R-Truth and former Superstar John Morrison several weeks ago. The Miz continues that SmackDown lacks “guts” and the show also has “no face”, “no star that shines brighter than the rest” with the ability to be a “crossover Superstar” like him. Miz continues that he is the one who makes talk show appearances and is in the main event of pay-per-views. The Miz is then greeted by his opponent, “The Great White” Sheamus! In the end, it was Sheamus blasting The Miz with the Brogue Kick en route to picking up the win.

After being put through a table with an RKO by Randy Orton at WWE TLC, but responding, in kind, by putting Orton through a table on RAW, Wade Barrett appears on SmackDown. Barrett states that he has been in the head of Orton for weeks before showing footage of his victory over Orton on SmackDown last month and following it up with footage of Team Barrett defeating Team Orton, where he pinned Orton again, at last month’s Survivor Series. Barrett then shows the final clip, which is of him delivering Wasteland to Orton through a table on RAW, adding that it is his “personal favorite”. Barrett continues that, after his victories over Orton, he is entitled to being named the #1 Contender for the World Heavyweight Title. Barrett then looks to leave, but he is quickly attacked by Orton as Orton throws Barrett into the ring, but Barrett narrowly escapes the RKO. Barrett then rushes backstage, but Orton is in hot pursuit s Orton catches up to Barrett and a brawl breaks out in the backstage area. The two rivals then fight through the halls and to the parking lot area, where Orton tosses Barrett face-first into a steel fence before dousing Barrett in water and hurling him over a table. Orton then dumps garbage on Barrett before throwing him onto the hood of a parked car. Orton then climbs to the roof of the car, where he plants Barrett with a vile RKO on the roof! What is the status of Wade Barrett following this assault by Randy Orton?

Then it was time for the main event as new World Heavyweight Champion Daniel Bryan went one-on-one with former United States Champion Dolph Ziggler, with Vickie Guerrero in his corner, in a non-title match. During the match, Vickie Guerrero’s other client, Jack Swagger, makes his way to ringside. Shortly after this, Vickie distracts the referee long enough for Swagger to lay Daniel Bryan out with a shoulder block on the outside of the ring. Having witnessed the interference by Swagger, Big Show marches to ringside, keeping Swagger and Vickie at bay. Later in the match, Swagger tries to attack Big Show from behind, but it has little effect on Show as Show chases Swagger into the ring, grabbing Swagger by the throat. However, SmackDown GM Theodore Long rushes out with a change to the match as Swagger will team with Dolph Ziggler to face the team of Daniel Bryan and Big Show!

Per the orders of Theodore Long, World Heavyweight Champion Daniel Bryan teamed with “The World’s Largest Athlete” Big Show to face the team of Dolph Ziggler & Jack Swagger, with Vickie Guerrero in their corner. In the end, it was Daniel Bryan locking in the LeBell Lock on Jack Swagger, forcing Swagger to tap out to pick up the win for himself and Big Show. What will happen next as both Big Show and Mark Henry look to reclaim the World Heavyweight Title from new champion Daniel Bryan?