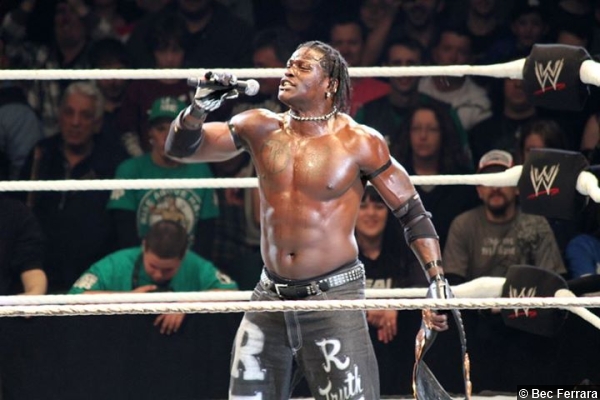 R-Truth gives The Miz a leg down.

The 963rd edition of WWE Monday Night RAW was a RAW SuperShow and it came to you from the Echo Arena Liverpool in Liverpool, England. As RAW rolls into Liverpool, the man who sent Triple H rolling away in an ambulance two weeks ago following two heinous sledgehammer shots returns to RAW, this time as a contracted WWE Superstar as Kevin Nash appears on the RAW SuperShow. After weeks of vignettes promoting his return, the scary and dominant Brodus Clay returns to action on RAW.

Two weeks before he teams with The Rock to face The Miz & R-Truth at Survivor Series, the RAW SuperShow kicks off with John Cena, who states that he is “angry” because everyone is talking about The Rock’s return to RAW during a three-hour special next week. Cena continues that they should be talking about this week’s RAW SuperShow as it is the first time that Liverpool has hosted the RAW SuperShow. Cena then reveals that RAW will feature The Miz & R-Truth in tag team action against himself and a “future WWE Hall of Famer”! Before Cena can divulge any more information, he is interrupted by The Miz & R-Truth as Miz admits that Cena beat him last week, but it does not erase the fact that they beat him down a couple of weeks ago and it does not erase the face that he pinned John Cena at WrestleMania. Miz continues that Cena embarrassed them last week and it will be the last time Cena will embarrass either one of them. Miz then proclaims that they will leave Cena with an “impression” he will never forget. R-Truth then states that no one will be laughing after Survivor Series and Cena will not be laughing on the RAW SuperShow. Cena then hypes up his tag team partner, calling him the “tenth wonder of the world”, but The Miz interrupts, saying that it “doesn’t matter” who Cena’s partner is, adding that Cena’s “time is up”. The Miz & R-Truth then close in for an attack on John Cena, but “The Long Island Iced Z” himself, Zack Ryder, makes the save as Cena and Ryder clear the ring of The Miz & R-Truth.

The opening match saw the United States Champion in action as Dolph Ziggler, with Vickie Guerrero in his corner, went one-on-one with “The Prince of Parkour” John Morrison in a non-title match. During the match, John Morrison hits the Flying Chuck Kick on Dolph Ziggler, but with Vickie Guerrero distracting the referee, Morrison could not capitalize. However, Morrison managed to kick out of a roll-up attempt before scoring a roll-up of his own to pick up his first victory since August! After pinning the United States Champion, will John Morrison get his shot at the gold?

Thirteen nights before he is a part of Team Orton in a Traditional 5-on-5 Survivor Series Elimination Tag Match against Team Barrett at Survivor Series, the monstrous Mason Ryan went one-on-one with JTG on the RAW SuperShow. In the end, it was Mason Ryan hitting a full nelson slam on JTG en route to picking up the win.

Thirteen nights before he defends the WWE Championship against CM Punk at Survivor Series, WWE Champion Alberto Del Rio was in action on the RAW SuperShow as Del Rio went one-on-one with one-half of the WWE Tag Team Champions, Kofi Kingston. In the end, it was Alberto Del Rio locking in the cross armbreaker on Kofi Kingston, forcing Kofi to tap out. After the match, the WWE Champion locks in the cross armbreaker on Kofi again, but the emergence of CM Punk makes Del Rio release the hold.

Face-to-face with CM Punk in the ring, WWE Champion Alberto Del Rio tells Punk that Punk “forced” him into a WWE Title match last week, calling Punk “pathetic and ugly” like the Liverpool fans. Del Rio states that he is the WWE Champion and Punk knows how “dangerous” he is before revealing that Interim RAW General Manager John Laurinaitis has informed Del Rio, through David Otunga, that he can “ask” Punk to cancel the title match. Del Rio then tells Punk to cancel the match or he is going to “force” him! Punk states that he did not know that he had to get in line and politely ask Del Rio for a title shot. Punk then reminds Del Rio that Del Rio originally won the WWE Title by cashing in Money-in-the-Bank on him at SummerSlam moments after he was powerbombed by Kevin Nash. Then, at WWE Hell in a Cell, Del Rio beat him with a lead pipe before taking the WWE Title. Punk continues that being a “cheap shot artist” works and that is why he did what he did last week. Del Rio then demands that Punk and the fans treat him with the respect he deserves. Punk then calls Del Rio “one dimensional”, saying that, besides Del Rio’s frequent speeches about “destiny”, Del Rio never has anything interesting to say, adding that, when people fast forward past Del Rio speaking, they never miss a thing. Punk continues that he is not only going to become the WWE Champion at Survivor Series, he is going to do what Del Rio has failed to do, make the WWE Title “interesting” again. Del Rio argues that he is the WWE Champion and that makes him the “best in the world” before again asking Punk if he is going to cancel their WWE Title match or not. Punk then pretends to think about it before telling Del Rio “no”.

The WWE Champion responds by attacking CM Punk and trying to lock in the cross armbreaker, but Punk fights out and locks the Anaconda Vice in on Alberto Del Rio. However, Del Rio’s personal ring announcer, Ricardo Rodriguez, makes the save, but Punk makes Rodriguez pay for it as he lays Rodriguez out with the GTS! After tasting the Anaconda Vice two weeks in a row at the hands of CM Punk, is Alberto Del Rio’s reign as WWE Champion set to expire at Survivor Series?

Thirteen nights before he is a part of Team Barrett in a Traditional 5-on-5 Survivor Series Elimination Tag Match against Team Orton at Survivor Series, “The All-American American” Jack Swagger, with Vickie Guerrero in his corner, went one-on-one with the man who defeated him last week with some help from The Muppets’ Beaker, Santino Marella. In the end, it was Jack Swagger locking in the ankle lock on Santino Marella, forcing Santino to tap out.

WWE Hall of Famer Jerry “The King” Lawler then appears in the ring to introduce the cover girl for the newest issue of Maxim Magazine, former Divas Champion Kelly Kelly. Kelly Kelly thanks the fans, but the former Divas Champion is interrupted by Divas Champion Beth Phoenix and Natalya, who mock the Maxim cover girl. Phoenix states that being a WWE Diva is about more than a “pretty face and a bucket full of perkiness” before saying that she is going to show what happens when a Diva like Kelly Kelly gets in the ring with a Diva like her. This brings out Eve and Alicia Fox, who run Natalya & Beth Phoenix out of the ring before the three Divas unveil Kelly Kelly’s Maxim cover.

Two weeks after leaving Triple H with a concussion and a fractured vertebra as a result of two hellacious sledgehammer shots, Interim RAW General Manager John Laurinaitis introduces the newest RAW Superstar, Kevin Nash, who makes his way to the ring. Nash first thanks John Laurinaitis before saying that the only person he owes an explanation to is Triple H. Nash continues that, in 1995, he watched Triple H walk in with a pair of slacks and a sports coat trailing Killer Kowalski. Nash states that he should have “buried” Triple H then, but Shawn Michaels watched his match and said Triple H has got something and is “funny”, so he let Triple H into The Klique. Nash continues that Triple H won him over and they had a “real friendship”, adding that he was honored to be at Triple H’s wedding. Nash then recalls the 2011 Royal Rumble Match where he received the “biggest pop of the night” for his return before calling Triple H about putting the “band back together” and Triple H does not even give a response. Nash then says that Triple H “betrayed” him and, without Nash, he’s nothing. Nash continues that Triple H is still the “measuring stick” in the WWE, saying that he does not need a “has-been Legends contract” because he’s “still got it”. Nash then states that assaulting Triple H with a sledgehammer made him “feel good”, so he did it again with a second sledgehammer shot, adding that he showed Triple H how to “play the game”. When Triple H is able to return, how will “The Game” respond to what Kevin Nash had to say?

Backstage, Interim RAW General Manager John Laurinaitis tells David Otunga that Brodus Clay deserves to debut in America and not in Liverpool, so he is postponing Brodus’ return. CM Punk then confronts the GM, telling Laurinaitis that he will be the WWE Champion. David Otunga then chimes in, telling Punk that he does not think that the WWE Champion should look like he works in a “gas station”. Punk responds by delivering a right hand to Otunga before pummeling the Harvard Law graduate before Alberto Del Rio comes out of nowhere, tossing Punk through a table before stomping away at the #1 Contender for his WWE Title. Del Rio continues to assault Punk before referees are finally able to pull the WWE Champion off of Punk.

Then it was time for the main event as, two weeks before they face John Cena & The Rock at Survivor Series, The Miz & R-Truth faced John Cena and Zack Ryder in tag team action. In the end, it was The Miz catching John Cena with a boot to the face and R-Truth holding down the leg of Cena, allowing Miz & Truth to pick up the win. Can The Miz & R-Truth pull the same ploy in two weeks at Survivor Series when they face John Cena & The Rock?