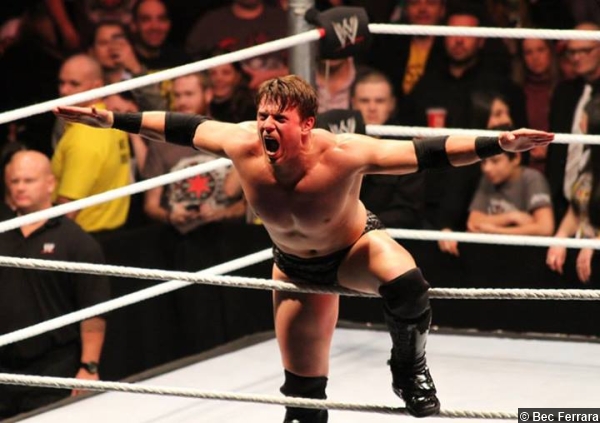 Just one night after a historic 25th anniversary of Survivor Series, the 965th edition of WWE Monday Night RAW was a RAW SuperShow and it came to you, live, from the Giant Center in Hershey, PA. One night after overcoming interference by Ricardo Rodriguez and forcing Alberto Del Rio to tap out to win the WWE Title, the new WWE Champion CM Punk would make his first appearance since regaining the title.

One night after forcing Alberto Del Rio to tap out to the Anaconda Vise at Survivor Series, the RAW SuperShow kicks off with the brand new WWE Champion CM Punk! Punk recalls a time when he was growing up, some kids said that wanted to be a policeman or firefighter or even Teen Wolf, but he said that he wanted to be a professional wrestler. Punk continues that it was a “gigantic deal” for him to walk out of Madison Square Garden as the new WWE Champion and he did as himself, adding that he never tried to be anyone or anything else. Punk then says that the WWE Title is where it belongs, in his possession because he is the “best in the world”. The new WWE Champion then proclaims that he is the “new face of the WWE” before Punk says that he plans to make good on his vow to make the WWE Title “interesting” again. Punk continues that he wants to be an “agent of change” in the WWE before asking the whereabouts of the WWE Ice Cream Bars. The WWE Champion then states that he would also like to change the title of “Interim General Manager” John Laurinaitis to “Former General Manager”. Naturally, this brings out Interim RAW General Manager John Laurinaitis, who tells Punk that they both want the “same thing”. The Interim GM then congratulates Punk on regaining the WWE Title before telling the new champion that he does not understand Punk’s problem with him.

New WWE Champion CM Punk explains that Mr. McMahon is a “greedy, money-grubbing, soulless bastard”, but he will admit it. However, Laurinaitis is a “stereotypical middle management” type, akin to Bill Lumbergh from the movie Office Space without any of the comedy, adding that the reference to Office Space is probably lost on the Interim GM. Punk continues that Laurinaitis uses the term “WWE Universe” because he wants to keep his bosses happy and that is what Laurinaitis is all about. Punk then tells the Interim GM that, until Laurinaitis can prove that he is an “agent of change”, then he will continue to look at Laurinaitis as a “poor excuse for a middle management, soul-sucking, douchebag, stooge”! Laurinaitis argues that he is “upper management” before saying that, just because he does not have any tattoos or piercings does not mean he is without a “wild side”, adding that he can be as “dynamic” as CM Punk. The Interim General Manager then makes the announcement that, per the rematch clause in his contract, Alberto Del Rio is entitled to a rematch for the WWE Title, a rematch that will take place on next week’s RAW SuperShow! CM Punk responds by asking the Interim GM why they cannot just have the rematch right now, but Laurinaitis says that he has other plans for CM Punk before announcing that Punk will face United States Champion Dolph Ziggler in a Champion vs. Champion Match. Punk calls the match “stupid”, saying Laurinaitis has no idea what the fans want because the fans want to see Dolph Ziggler vs. Zack Ryder for the United States Title. Laurinaitis then tells the WWE Champion that Ryder cannot challenge Dolph for the title because Ryder will face Alberto Del Rio, adding that Ryder cannot beat Dolph and neither can Punk. The new WWE Champion then leaves the ring to confront Laurinaitis on the stage, telling the Interim GM that he will beat Dolph Ziggler tonight, Alberto Del Rio next week, and, at some point, beat some sense into Laurinaitis!

In the middle of Ricardo Rodriguez’s personal introduction of Alberto Del Rio, Zack Ryder snatches the microphone away, shouting “woo, woo, woo, you know it” before daring Del Rio to come into the ring for their match.

After beating Jack Swagger to the point of getting himself disqualified during the Traditional Survivor Series Elimination Tag Match, “The Great White” Sheamus went one-on-one with “The All-American American” Jack Swagger, with Vickie Guerrero in his corner. In the end, it was Sheamus blasting Jack Swagger with the Brogue Kick en route to picking up the win.

One month after his brutal sledgehammer assault that left Triple H with a fractured vertebra, Kevin Nash made an appearance on the RAW SuperShow as Nash says that he watched Survivor Series last night and thought about what “could have been”. Nash continues that he won a championship in Madison Square Garden and, a few years later, he and the other members of The Klique cement their friendship. Nash then states that it should have been him and Triple H facing The Rock & John Cena at Survivor Series, but it did not happen because of Triple H. Nash continues that Triple H is “gone” because of him, adding that he is the “true survivor” of The Klique.

One night after being one of the two survivors at the end of the Traditional Survivor Series Elimination Tag Match, Intercontinental Champion Cody Rhodes appeared on the RAW SuperShow. Rhodes proclaims that he is “unbeatable” and “unrepentant” before laughing maniacally. The Intercontinental Champion was then in action as Cody Rhodes went one-on-one with Santino Marella in a non-title match. In the end, it was Cody Rhodes picking up a quick win, hitting the Cross Rhodes on Santino Marella en route to picking up the win. After the match, Cody Rhodes confronts commentator and six-time World Champion Booker T at ringside over Booker’s recent issues with the attitude of Rhodes. While the legend explains that he has nothing personal against the Intercontinental Champion, the unbalanced Rhodes throws a glass of water in Booker’s face! How will Booker T respond to the actions of Cody Rhodes?

One night after making Alberto Del Rio tap out to win the WWE Title at Survivor Series, new WWE Champion CM Punk went one-on-one with United States Champion Dolph Ziggler, with Vickie Guerrero in his corner, in a Champion vs. Champion Match. In the end, it was CM Punk hitting the GTS on Dolph Ziggler en route to picking up a hard-fought win. Can CM Punk do the same to Alberto Del Rio when he defends the WWE Title against Del Rio on next week’s RAW SuperShow?

One night after assaulting World Heavyweight Champion Mark Henry before wrapping a steel chair around Henry’s ankle and crushing it with a big leg drop, “The World’s Largest Athlete” Big Show appeared on the RAW SuperShow. Big Show states that he proved that he is “better” than Mark Henry at Survivor Series, but when Henry realized he could not win, he got himself intentionally disqualified. Show continues that Henry is still the champion, but Henry got carted out of the arena, adding that it is good for Henry that Henry’s leg is not broken. Show then says that, when Henry returns, he will be waiting and Henry better bring the World Heavyweight Title with him.

One night after he and The Rock defeated The Miz & R-Truth only to be planted with a Rock Bottom by The Rock after the match at Survivor Series, John Cena made an appearance on the RAW SuperShow. Cena says that he and The Rock co-existed as a team to beat The Miz & R-Truth at Survivor Series, continuing that, while Rock received a raucous reception, it was “business as usual” for him. Cena continues that he was congratulating The Rock at Survivor Series when Rock called him into the ring, some words were said and he found himself on the business end of the Rock Bottom. Cena then states that WrestleMania will be exactly what it needs to be.

Before Cena can continue, he is interrupted by the men he and The Rock defeated at Survivor Series, The Miz & R-Truth as Miz tells Cena that Cena’s ego will not allow him to admit that The Rock showed him up at Survivor Series. Miz continues that no one wanted to see Cena last night before R-Truth tells Cena that WrestleMania will see The Rock putting “boots to asses” to John Cena. Cena responds by saying that no one cares about The Miz & R-Truth at all before saying that Miz thinks that Truth is a “whacked out nut job” who has been riding his coattails. Cena continues that Truth thinks that Miz is a “pompous, arrogant, attention-stealing D-Lister whose biggest accomplishment was being a skinny loudmouth on a crappy reality show.” Cena then concludes by telling Awesome Truth that they should be “booing themselves”. Cena then makes his exit, leaving The Miz & R-Truth to let what Cena said sink in. This leads to an argument between The Miz & R-Truth as Miz shouts at Truth that he is a former WWE Champion and the fans watch RAW for him and Truth needs to get that through his “thick skull”. R-Truth then warns Miz not to do something Miz will regret, but Miz responds by shoving Truth and Truth fires back with a right hand to the jaw of The Miz! Miz then backpedals, telling Truth to calm down and trying to make R-Truth understand that Cena is trying to play them against each other. The Miz then convinces R-Truth that they should hunt Cena down together, but once they are on the staging area, Miz takes R-Truth and delivers the Skull Crushing Finale to Truth on the steel stage! How will R-Truth respond to The Miz planting him on the stage with the Skull Crushing Finale?