Every era had their icons, those grapplers who defined the sport, who pioneered aspects of what we see today, from entrance music, flamboyance, showmanship, charisma, technical prowess, toughness or a combination of all of the above.

From the in-ring prowess of a guy like Lou Thesz, through the groundbreaking character of “Superstar” Billy Graham to the magnetism of Hulk Hogan through to the modern day icons of Shawn Michaels and Undertaker, each one has left their mark on the industry.

It’s these legends of the squared-circle that are the foundation of what we see today and, in this collection, we celebrate those who have made marks since the turn of the century. Now, some of the people on the list had their start before the year 2000, but it’s been in the time since then that they really took it to the next level in WWE. 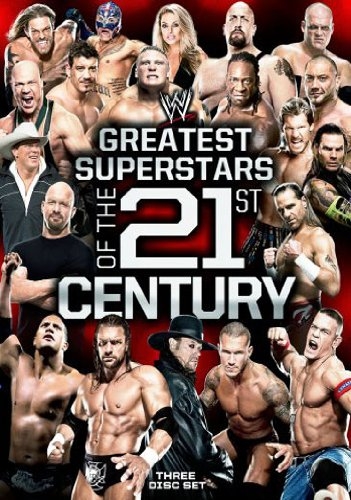 Now, unlike the previously released Top 50 SuperStars of All Time DVD, this isn’t a countdown leading to the #1 guy since the year 2000. The main feature is basically just a brief highlight package of the wrestler in question with some comments from their peers on why they deserve a place on the list.

As with anything of this nature, there are going to be guys you feel should be on there and guys you have no idea why they made the cut. With that in mind, however, it’s hard to argue that the guys on the list deserve their place for one reason or another.

When introducing a wrestler, a little mini-bio appears showing what years they were active in WWE in the 2000-2010 time-frame. With some of them, like Triple H, Undertaker and Kane, being active for the entire period and others, like Brock Lesnar having a short stint (he was only in the promotion for exactly two WWE calendar years).

It’s a nice set-up and it means no-one overstays their welcome, although some talents get more time than others. Surprisingly, there is literally nothing negative mentioned about either Kurt Angle or Jeff Hardy; a move that continues the tradition set by the Top 50 countdown from a few months ago.

Only thirteen matches are featured on the DVD release (the Blu-Ray has more – see below), but they are all fantastic to re-visit a second time. The first bout (Rock v Booker T, with a cameo from the APA – and a brutal Clothesline from Hell on Shane McMahon) is great and is amazingly enhanced by a killer crowd and the greatest commentary duo of the 21st Century – Paul Heyman and Jim Ross.

Seriously, they just worked so well together and had a chemistry that, in my opinion, surpassed that of JR & King at their peak. Heyman knew how to get the best out of Ross and also make sure everyone was put over while also favouring the heels. The closest we could get today is if JBL comes out of retirement and Jim Ross is paired with him.

Jericho v Van Dam is a great TV match (featuring an appearance by Triple H – wearing a frankly bizarre “No Foreplay” t-shirt), Kane v Triple H is the match for Kane’s mask that was pretty damn good and the rest of the bouts on show are great examples of why the guys on the list are on the list in the first place.

For me, the best match on the card is the 60min Iron Man Match between Brock and Angle (which is shown in its entirety – minus commercial breaks), with the RAW Eight-Man Tag being up there, as are Batista v Undertaker and Rey v Eddie.

Oh, and when a simple single-leg step-through gets a huge pop (the reaction when the fans realise Trish is going for a Sharpshooter on Lita IN CANADA), you know you’ve got a great crowd.

The best thing WWE did was not make this a countdown of the top names. It saves a lot of arguing over who should be above who and stops Kurt Angle from whining like a little bitch on Twitter too.

I can’t argue with the wrestlers featured as they all, for various reasons, belong there. Of course, there are omissions (the obvious one being Chris Benoit), but you’ll find that in any list because “your” guy isn’t there.

Of course, the real attraction with a collection like this is the matches on the second and third discs. Thankfully, they’ve put a lot of TV matches in there, which means there’s less chance you have them on another release and also that you may come across a gem that you forgot about.

This is worth price for the matches alone.