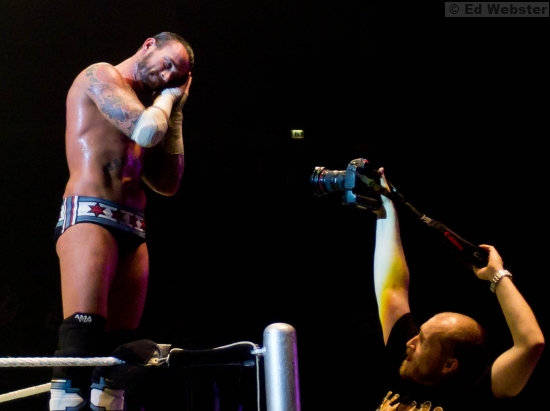 Punk pops Triple H with the pipe bomb and “The Hitman” returns to action.

Six nights before Night of Champions, the Superstars of RAW and SmackDown converged as the 955th edition of WWE Monday Night RAW was a RAW SuperShow and it came to you, live, from the Scotiabank Place in Ottawa, Ontario, Canada. On what could be his final night as the Chief Operating Officer of the WWE pending the result of his Night of Champions match against CM Punk, both COO Triple H and CM Punk would be in the same ring at the same time as “The Game” and “The Cult of Personality” have their final face-off on RAW SuperShow. Not only that, but what will happen when WWE Champion Alberto Del Rio and #1 Contender John Cena are in the Scotiabank Place just six nights before they go one-on-one for the WWE Championship at Night of Champions?

Six nights before he makes his first pay-per-view title defense against John Cena at Night of Champions, RAW SuperShow kicks off with the WWE Champion, Alberto Del Rio, and his personal ring announcer, Ricardo Rodriguez. The champion says that what he cannot deal with is being “disrespected” like he was last week when John Cena hit him with the Attitude Adjustment, adding that no one makes “fun” of him. Del Rio continues that he injured Rey Mysterio and he is the one who forced Edge to retire and beat CM Punk at SummerSlam before proclaiming that he will teach John Cena a “lesson” at Night of Champions. Del Rio then proclaims that he is the “greatest of the great” before he is interrupted by a Hall of Famer and Canada’s own Bret “The Hitman” Hart!

Bret Hart tells the WWE Champion that he did not come out there to “disrespect” Alberto Del Rio, he came out there to give Del Rio some “advice” and an “education” before telling Del Rio that he does not “know what it means to be a champion”. Del Rio then reminds the Hall of Famer that he injured Rey Mysterio and retired Edge, threatening to do the same to Bret Hart, but “The Hitman” tells the WWE Champion that he is “all style and no substance”. Bret continues that Del Rio needs to become a “real champion” and become “a man with pride”, who faces “all challenges” and leaves it all in the ring every night, adding that Del Rio is a long way away from being “the best there is, the best there was, and the best there ever will be!” Del Rio accuses Bret of making fun of him, saying that the Hall of Famer looks like a “homeless man”, adding that Bret looks like one of the “illegal Canadians” that Del Rio hires to clean his house and that he is the “best there is” before saying that he is going to “make an example” out of Bret!

The opening match of RAW SuperShow saw the dysfunctional tag team of United States Champion Dolph Ziggler & Jack Swagger facing the team of Alex Riley & John Morrison. During the match, Jack Swagger inadvertently collided with Dolph Ziggler and Swagger would get laid out with the Riled Up by Alex Riley as the United States Champion looks on, opting not to save the match for himself and Swagger.

Backstage, SmackDown General Manager Theodore Long informs the manager of Dolph Ziggler and Jack Swagger, Vickie Guerrero, that Dolph Ziggler will defend the United States Title against Jack Swagger, Alex Riley, & John Morrison in a Fatal 4-Way Match this Sunday at Night of Champions! After hearing this news, Vickie Guerrero would take issue with Divas Champion Kelly Kelly, saying that even she could beat Kelly Kelly, which leads to Theodore Long making that match official.

In a rematch from SmackDown, World Heavyweight Champion Randy Orton went one-on-one with his former protégé, Intercontinental Champion Cody Rhodes, in a non-title Champion vs. Champion match. Early on in the match, Mark Henry would come out, making his presence felt on the staging area as Randy Orton quickly exits the ring to grab a steel chair, looking to pursue the #1 Contender, who makes a quick exit. With his focus frequently returning to the staging area, Mark Henry once again showed up as Henry takes a seat on a steel chair on the stage, getting the attention of Randy Orton as Orton exits the ring to lock eyes with his Night of Champions opponent, which allows Cody Rhodes to take advantage. A third distraction by Mark Henry ultimately proved costly for Randy Orton as Cody Rhodes blasts Randy Orton with his protective face mask, following it up with Cross Rhodes en route to defeating the World Heavyweight Champion. After the match, Mark Henry would enter the ring, delivering a vicious steel chair shot to the back of Randy Orton. Is there any way Randy Orton can hang on to the World Heavyweight Title this Sunday at Night of Champions?

Six nights before their No Disqualification Match where, if Triple H loses, he will resign as the Chief Operating Officer of the WWE, the final face-off before Night of Champions took place on RAW SuperShow as WWE COO Triple H and “The Cult of Personality” CM Punk would be in the same ring at the same time. After both men made their way to the ring, CM Punk tells Triple H that he “respects” Triple H, but he does not like him. Punk continues that, when he first arrived, Triple H referred to him as a “pompous, undersized internet darling”. Punk continues that Triple H is “just as bad” as Vince McMahon as they both just stand still and let everything pass them by and both of them do not think that a guy who looks like him does not belong in a ring with a guy like Triple H. Punk continues that both Triple H and Vince have both had a “bodybuilder fetish/fantasy” about what a main eventer should look like.

Triple H then interrupts, citing exceptions to that mentality, exceptions like Shawn Michaels, Mick Foley, Bret Hart, and Rey Mysterio. None of which cannot be described as “bodybuilders”, adding that CM Punk should not use that as an “excuse” for his “failures”. Triple H continues that his opinion does not matter, because the fans’ opinions do, saying that Punk did not get a good fan reaction for his first six years and, when the fans get on Punk’s side, the fans will come out to see him. Triple H then states that, if Punk had that following, then he would not need to make phone calls to try and get on the 7-11 cups because 7-11 would “demand” that he be on the cups. Punk then brings up the WWE Ice Cream Bars that the fans have been asking for since he brought the product up a couple of months ago.

CM Punk then brings up his first “brass ring speech” from just before his pay-per-view debut at Survivor Series in 2006 where he was on a Survivor Series team captained by D-Generation X, Triple H & Shawn Michaels, where the fans chanted his name over DX’s name. Punk continues that the story ends with him grabbing the “brass ring” that went nowhere” before saying that he would “rather be hated” for who he is than “loved” for who he’s not. Triple H then tells CM Punk that Punk needs to look in the mirror and stop blaming everyone else and maybe he is “not the best in the world”. Triple H continues that John Cena is a guy who “came from nothing” and made himself the “biggest star” in the WWE, selling out arenas and he did it on his own by winning the fans over. Triple H then tells CM Punk that you are handed nothing in the WWE, you have to “bust your ass” to get over. Triple H then tells CM Punk that Punk made things “personal” while he tried to keep them “business” and now he will have to deal with him as a “man” at Night of Champions.

CM Punk then tells Triple H that his “quest for change” will not stop until Triple H is no longer the COO before saying that it is “not CM Punk talking to Triple H”, it is “Phil Brooks talking to Paul Levesque”, but before Punk can continue, his microphone is cut off! Triple H then tries to give his microphone to Punk, but it is also cut off once Punk gets his hands on it. Triple H then gets a third microphone and hands it to Punk, urging Punk to talk, but Punk opts to blast the COO in the skull with the microphone before leaving the ring! What will happen this Sunday at Night of Champions when this volatile rivalry comes to a head as Triple H goes one-on-one with CM Punk in a match with no disqualifications and, if Triple H loses, then he will resign as the COO of the WWE?