Chris Masters is one of the most talented young wrestlers in the business today and has enjoyed two successful spells with WWE.  His first stint with the company was between 2005-07. Masters then rejoined the company in 2009 before departing again just before the WWE SummerSlam PPV in August 2011.

Masters has the total package with his in-ring performances as well as great skills on the mic and a great character who knows how to carry himself for comedy sketch segments as well as serious roles.

We caught up with Masters for an exclusive chat about his time in WWE and what his future plans are. 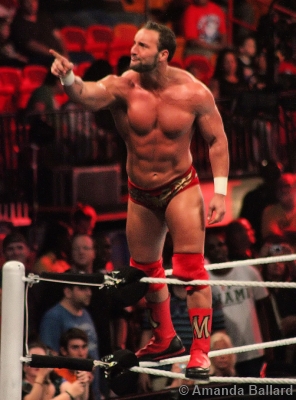 How did you first get into wrestling?

I first started training at Ultimate Pro Wrestling here in California, I was going there for about a year and I was then eventually spotted by WWE.  After signing with WWE I headed over to their developmental system.

Who were some of the wrestlers that inspired you to get into the sport?

Ultimate Warrior was my first introduction into the sport; I really started to appreciate the likes of, Shawn Michaels, Bret Hart and Mr. Perfect. I enjoyed watching all of the guys who were athletically gifted, great storytellers, great sellers and guys that just put on really good matches.

Having had two stints in WWE, what did it feel like when you first made it with WWE?

It was a dream come true. You always wonder what is my theme music going to be like? What is my character going to be? When you’re a kid you can only really dream about it but in reality, it was very cool and overwhelming at the same time.

Do you think you were utilised in the right way by WWE or do you think more could have been done with your character?

I definitely think that there were a lot of things that could have been done here the second time especially before they let me go. My ending work was coming along nicely and I think I was a gamble they should’ve taken, and I don’t think I should have been expendable.

I had management coming up to me and telling me what a great job I’d done and how I’d come along so well, and were saying they we going to think of something to do with me and maybe take me off television for three months. To be honest with you I feel like I should still be there. 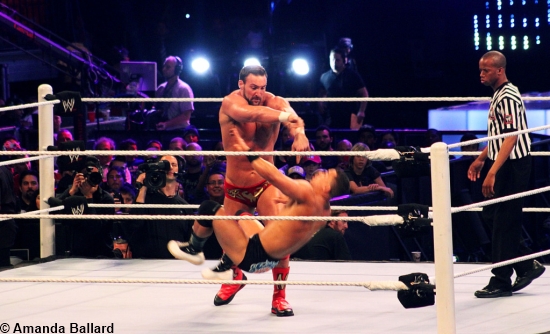 When you get released by WWE are you told the reasons why and if there is a possibility to return?

I don’t see the reason why they wouldn’t. We didn’t part on bad terms, for me personally this time was very different from the first time I was released. I do feel like I worked my ass off and they should’ve at least given me another shot.

The reason that gave me didn’t really make much sense, but they are doing lots of company restructuring and they have about 80 people in developmental and they want to give everybody a shot so that’s what I’m expecting.

Also, they might just not been able to figure out what to do with me, but we should’ve at least had a conversation before ultimately letting me go. That would have a least opened the door to see there was something we could have done.

Do you feel any bit aggrieved that you’ve been let go in the prime of your career but WWE  decided to bring back Kevin Nash who’s in his 50’s?

Not really because I like Kevin Nash, I don’t think I can really get annoyed with him. I don’t want to look at it like that, but I look at other guys on the roster and I don’t mean to mention names but people like JTG and a hand full of other guys and you think, ‘you’re going to keep this guy but you’re going to get rid of me’, I don’t want to sound bitter, every situation is different. Like I said, I was under the impression this was going to be my year and I was really going to bounce back from all the trials and tribulations of the last four years and that’s why it came as such a surprise when I did get the phone call telling me I was no longer needed.

There has been a lot of talk recently about the term ‘wrestling’ what are your thoughts on WWE dropping the word from the company name?

That’s just a Vince (McMahon) thing. He wanted to get away from the old school rasslin’ and focus it more as an entertainment product. I think the powers to be feel there is a certain stigma to the wrestling business, so they’re trying to change with the times. It’s a smart business decision but no matter what it still is wrestling and you can try and make it a bad word but sports entertainment slash wrestling, it’s like tomato/tomahto, it’s all the same.

You have worked for Vince on two occasions now, what is he like as a boss?

He is just like what everybody says. He is powerful, an intimidating figure, businessman. That’s just how he is, everybody who’s in this business or watches this business you probably get that same reaction because you look at Vince like he is the guy who is basically responsible for all of this. I think there is a certain level of respect and his perception probably doesn’t change much from a fan’s perspective to a guy who’s in the business perspective if you have a good read of Vince.

What has been the highlight of your time working with WWE?

One thing that I have really enjoyed from my time working with WWE is being able to travel the world and seeing all the different cultures and performing for all the different types of people has just been so amazing. I’m very grateful for that.

In terms of things I’ve actually done in the business over the last four years I have just loved going out there and performing, its been my outlet, its been my release.

Some of the proudest things I’ve done include getting in the ring with Shawn Michaels and Ric Flair, during my first run with the company. You had three generations of wrestlers in there, and it’s not that often you get to work with your hero and then your hero’s, hero and that is the situation I found myself in and that was pretty amazing for me.

What have you been up to since leaving WWE?

Several American wrestlers such as MVP have gone over to Japan to wrestle, would that be an option for you?

I’m just going to do everything I can may that be going to Japan, heading over to Europe or sign with another company, but I’m at the peak of my career so I’m ready to have a go at whatever comes my way.

Many wrestlers, yourself included have taken to YouTube, what can people expect from your videos?

I think YouTube is a great outlet for wrestlers to express themselves. Of course, you are going to have certain restrictions if you are under contract with a company obviously. There is however nothing tying me down and I know I’m going to do some things that are going to surprise some people but it’ll all be fun. I’m just looking to make an entertaining show every week.