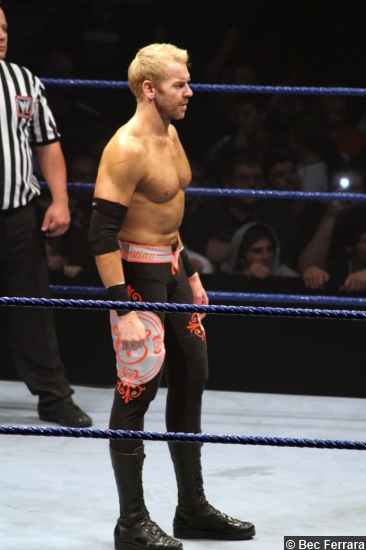 Nine nights before SummerSlam, the 624th edition of WWE Friday Night SmackDown came to you from the Rupp Arena in Lexington, KY. Nine nights before he gets his No Holds Barred rematch against Christian for the World Heavyweight Title at SummerSlam, “The Viper” Randy Orton teamed with “The Prince of Parkour” John Morrison to face World Heavyweight Champion Christian & R-Truth in tag team action.

After stepping up to try and stop the seemingly unstoppable path of destruction by Mark Henry last week, Sheamus kicks off SmackDown nine nights before his showdown with Mark Henry at SummerSlam as “The Celtic Warrior” went one-on-one with “The Punjabi Nightmare” The Great Khali, with Jinder Mahal in his corner. After taking everything that The Great Khali had to dish out, including the Khali Vise Grip, Sheamus slayed the giant Great Khali by blasting Khali with the Brogue Kick en route to picking up a big win. Can Sheamus do the same to Mark Henry when they go one-on-one in nine nights at SummerSlam?

Mentor and protégé faced off on SmackDown as second-generation Diva Natalya went one-on-one with A.J. In the end, it was Natalya locking in the Sharpshooter on A.J., forcing A.J. to tap out to pick up the win. After the match, Natalya looked like she was helping her protégé to her feet, but the former Divas Champion abruptly ended her friendship with A.J. as Natalya shoved A.J. down before taking the young Diva to the outside, sending her back-first into the ring apron before suplexing A.J. on the arena floor. Following this attack, Natalya grabbed a microphone and stated that she is “with” Beth Phoenix on Phoenix’s agenda before Natalya tells A.J. that the days of “the cute, perky, little princesses are over”. After Beth Phoenix’s attitude change on RAW and Natalya’s similar attitude change on SmackDown, can anything stop these two powerhouse Divas from taking over?

After being named the Assistant to the General Manager by WWE COO Triple H last week, Theodore Long’s new Assistant, Zack Ryder, appeared on SmackDown to deliver the “State of the Showski” address. Ryder welcomes everyone to “ZackDown”, proclaiming that ratings were “through the roof” last week because of his new position. Before Zack Ryder can deliver his “State of the Showski” address, he is interrupted by Intercontinental Champion Ezekiel Jackson as Ezekiel asks Ryder why Ryder put him in a 2-on-1 Handicap Match against both Cody Rhodes & Ted DiBiase last week. The Assistant to the GM tries to smooth things over with the Intercontinental Champion, saying that he thought Ezekiel agreed to the match. However, the discussion is then interrupted by the arrival of Cody Rhodes & Ted DiBiase as Rhodes calls Ezekiel’s protests “sour grapes”, adding that Ezekiel does not “deserve” to be champion. Cody Rhodes then challenges Ezekiel Jackson to put the Intercontinental Title on the line against him so that he may “resurrect” the image of the Intercontinental Championship, just like he “resurrected” the career of Ted DiBiase. Ezekiel interrupts and tells Ted DiBiase that DiBiase is being “used” just like he was “used” as a member of The Corre before telling DiBiase that there is “nothing greater than freedom”. Rhodes argues that DiBiase wants to “associate” himself with a “future” and that Ezekiel’s “ignorance” is turning the Intercontinental Championship into a “memento of mediocrity”, adding that DiBiase has “free will” before telling DiBiase to go into the ring and “beat the champion” out of Ezekiel Jackson. The Assistant to the GM agrees to the match, but is then interrupted by SmackDown General Manager Theodore Long, who says that he does not care what “sounds good” to Zack Ryder and reminding Ryder that, despite Ryder’s proclamations otherwise, Ryder is not the Assistant General Manager, but he is the Assistant to the General Manager, meaning that Ryder does not have the power to make matches. The GM then announces that his Assistant, Zack Ryder, will go one-on-one with Intercontinental Champion Ezekiel Jackson and Cody Rhodes & Ted DiBiase are banned from ringside!

Nine nights before he clashes with Sheamus at SummerSlam, “The World’s Strongest Man” Mark Henry went one-on-one with “The Moscow Mauler” Vladimir Kozlov. In the end, it was Mark Henry making quick work of Vladimir Kozlov, planting “The Moscow Mauler” with the World’s Strongest Slam en route to picking up the win. After the match, Mark Henry headed to the outside of the ring and grabbed a steel chair and, much like he did to Kane & Big Show, Mark Henry placed the chair around the ankle of Vladimir Kozlov before dropping all of his weight onto the steel chair, snapping the ankle of Kozlov. This brought out Sheamus who, with a steel chair, ran Mark Henry out of the ring as Henry refused to come back into the ring, leaving Sheamus standing tall in the middle of the ring. What will happen in nine nights when Sheamus and Mark Henry go one-on-one at SummerSlam?