This week saw the release of SuperFan! A new WWE novel for middle-grade boys and girls by Jeff Gottesfeld. Jeff has an extensive writing background in fiction, film, television, and stage. Frequently partnering with his wife (Cherie Bennett), Jeff’s previous works include Anne Frank and Me, A Heart Divided, The A-List not to mention 2006 film Broken Bridges as well as TV shows such as The Young and the Restless and Smallville! 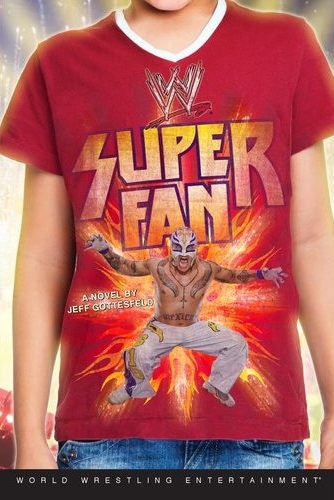 Why don’t you tell us a little about yourself to get started?

My pleasure. I’m basically a jock who’s also a writer. I played competitive tennis when I was a junior, which is another way of saying that Andy Murray or Rafael Nadal would have destroyed me and left no traces, but I was good enough to play for my high school and college, and teach during the summers. I still play. I ski, I lift weights, I run, I play golf, and I’m a serious sports fan, too. My favorite American football team is the New York Jets and Premier League team is Tottenham Hotspur. That said, I want to go to a Celtic FC game sometime so I can sing “Fields of Athenry.”

I was raised in the New York City area, and now live in Los Angeles.

How did you get into writing?

I always wrote, though I didn’t set out to be a writer, per se. The first things I ever had published were politically naive letters-to-the-editor of the local newspaper when I was in grade school. Then I did the school newspaper thing in high school and college, and kept at it into law school. (Yes, I’m a lawyer who doesn’t practice. Better other people than me!). Coming out of law school, I went to work in business and professional publishing, but still wrote freelance nonfiction for magazines and newspapers for fun. Then I met my ex and former writing partner, Cherie Bennett. We started collaborating on fiction, screen and television stuff, and even some work for the stage. Through all that, I kept up my essay writing on various subjects (though not WWE).

Along the way was some pretty cool stuff. The first ten books (as Zoey Dean) in the bestselling THE A-LIST series for Little Brown, a couple of TV shows, the Paramount movie BROKEN BRIDGES, and a pretty racy novel for adults called TURN ME ON. Now, I’m writing on my own, and with some other partners.

So how did you come about this opportunity? Did WWE contact you or did you pitch your idea to WWE?

Did WWE contact me or did I pitch? Both, sort of.

I’ve got a pretty good relationship with the publishing house Penguin Books, and the editor-in-chief of a couple of their young reader divisions, Bonnie Bader. A couple of years ago, Bonnie and I were meeting about another project when she mentioned offhandedly that her company had just entered into a big-time kids’ book licensing agreement with WWE.

You should have seen my eyes get big.

I told her that I was part of the WWE Universe and had been part of the WWE Universe back before WWE was the WWE. I told her how and why WWE works so well as entertainment for guys. She told me that most of what they had planned was non-fiction, but novels were not out of the question. I asked if I could pitch a couple of ideas to her, and she was more than open. I came up, with Cherie’s help, with two that Bonnie liked a lot Several months later, Bonnie asked if we wanted to take on SuperFan! (It had a different title then, but let’s called it that). Cherie didn’t, but I did. So I wrote a massive chapter-by-chapter outline which everyone seemed to love, and then it was off to the races for me at the keyboard.

Have you always been a fan of WWE? When did you start watching?

I had a terrible bicycle accident when I was in third grade. For many weeks in the hospital, there wasn’t much I could besides watch TV. So I watched. And I saw stars like Bruno Sammartino (I know he’s got a scratchy relationship with WWE now; may that please change!), Cowboy Bill Watts, Gorilla Monsoon, Haystacks Calhoun, Professor Toru Tanaka, “Crazy” Luke Graham…you get the idea.

Then, I sort of drifted away for a couple of decades.

Then, with the ascendancy of Stone Cold, The Rock, and HBK, it became impossible not to pay attention again.

“Watching” turned into fanaticism when I first pitched the idea for SuperFan! in 2009. I honestly don’t think I’ve missed a RAW, and hardly any SmackDowns, since then.