After what was a pretty terrible week in TNA’s last outing it’s time to dive into the Impact taping from the 28th of April (this coming Tuesday on challenge in the UK). I don’t usually skip ahead in these reviews but I have to say that this episode is pretty much only watchable for the Herculean effort Scott Steiner makes in making literally no sense through out the show. I haven’t laughed so hard at anything in wrestling ever. Anyway, without any further ado lets get into the show itself.

We kick off the show as we do every week with a recap from last week and that starts with the Angle/Jarrett poop from the skies and Sting getting mic checked by Anderson. The show proper starts with a random assortment of Knockout and fat old women in the ring. Karen and Jeff come out under an umbrella, nice touch. Karen basically goes to each woman and accuses them of being Kurt’s “mistress” which means that two “backstage” girls are forced onto the mic. Why start the show with literally the worst actresses on the planet? Though Karen was slightly better than she usually is in this segment it was still torturously long and overblown. Karen could make “what do you have to say about that” a catchphrase. She does however make funny little noises between talking to people. Last for the interrogation is Velvet Sky prompting Love and Winter out for the beat down into a match which apparently was scheduled for later.

Whole segment should have been Karen calling out each person to the ring and leaving Sky there as she called Love. We could have avoided the backstage people all together. Maddison was very good for her part in this. 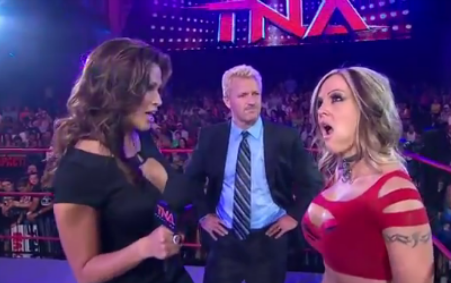 Velvet teaches Karen exactly the best way to get pushed in TNA.

Love zombified in ring is bearable compared to out of ring where she looks stupid, the not acknowledging damage actually gives the angle something else. Crowd go dead enough to hear Winter as the single voice in the crowd shouting anything. Love’s finishing kick looked sweet though in what was basically another nothing match for the knockout division. Little bit of excessive chocking from Love as the segment draws to a close, mercifully.

Excuse me whilst I vent my spleen a little here….F*ck that backstage guy. And please God f*ck Anderson. The interviewer is such a weedy retard asking the lamest questions. It’s got to be pretty hard to make Christy Hemme look like a competent backstage interviewer but he does it. Anderson is getting tiresome now.

Again with the retarded interviewer (maybe he should quit pro-wrestling and become a sprinter) with Matt Morgan. Morgan came off ok, bit bland but not dreadful by any means. More interested in a feud with Steiner than a world title angle with him though. Something about Morgan’s voice irritates me though. I think it reminds me of that gravelly voiced gay guy Harvey Fierstein (you may remember him from such films as Mrs Doubtfire and La Cage aux Folles).

The worst faction ever come out with their worst member; Anarquia. Don’t know if this is just me but he always sounds to me like he doesn’t really speak Spanish. His pigeon English sounds put on as well. Really, WTF has Sabin done to deserve being involved with this shite? Sabin with a spring board kick and ooooh God that looked like a nasty landing. Anarquia rolls of up Sabin quickly so you’d assume it’s a legit injury. M.A give Chris a bit of a kicking to bring out Alex Shelly. So Shelley comes back as Sabin goes out. M.A completely fails to be distracted by the MCM music coming on about 5 minutes before Shelley appears. 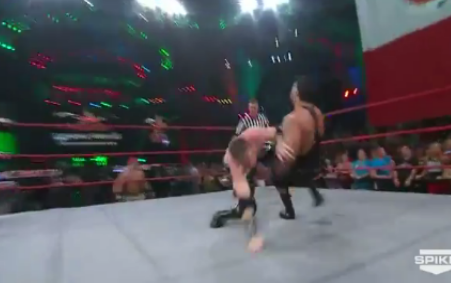 Yeah, I’m pretty sure your knee and ankle should not be going in two separate directions.

Steiner….. My God, if that miss on the golf ball was intentional he’s a genius because that was the funniest thing I’ve ever seen in pro wrestling. I love Steiner. He’s awesome. Oh God now he’s throwing… paper towels at Matt Morgan? And now he’s throwing clearly very light plastic tables at him? The Broom!! The Broom!! Choke out with the old timey broom! Morgan turns the tables (or crashes Steiner through them) and Steiner screams he’s sorry! That was without doubt the best segment ever. For all the wrong reasons but it was solid gold from the tiny plastic putter to Steiner laughing at Morgan right at the end.

To the parking lot, Sting walking makes him sound like the plastic curtains you only see in corner shop doors. Stinger proceeds to beat the crap out of Andersons car (predictable since we’ve never seen his car before.) Also for anyone saying that Anderson is over as a face; why are car proud Americans happy for his car to be smashed up even if it is Sting doing it? Answer because no one gives a crap about him or his car. 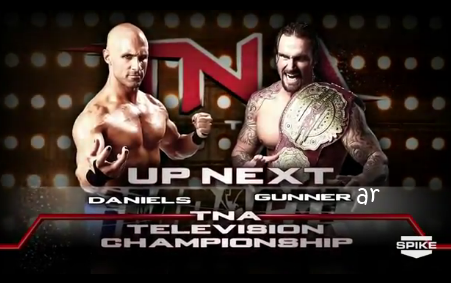 Christy Hemme: We call her red beard but only when she doesn’t shave…

Jeremy Borash obviously wants some time off so we have Hemme pronouncing Gunner as Gunnnerrarrr. Chris Daniels is his opponent, now I know Daniels was messing with Immortal but surely it would make sense if this was one of flairs foursome? Decent enough match but a bit odd to have Daniels do the job a couple of weeks into his return like that. Clearly he’s got some heat with the crowd so why not use it?

Sting in the ring and he calls out Anderson who duly obliges. The crowd are so quiet during Anderson’s speech you can hear them laugh at him saying he’ll always one up Sting. RVD comes out sensibly to say that he’d rather go one on one with Sting and not have Anderson involved! Get this man booking TNA! Crowd dig RVD wanting Anderson to shut up, who can blame them. Hogan out with The Pipe probably because The Broom was taking its spot. Hogan makes Bully Ray V Anderson V Sting for the title tonight.

Samoa Joe interview which was a tad bland but basically hyped up Crimson a bit. How many times can Hemme mention Samoa in one sentence!? Tenay bigs up Joe’s winning streak, so why the hell is Joe not back in the main event. Bit of a poor match here, Joe never really got into his stride and Crimson looked a bit uncomfortable when straying away from the more orthodox style to match Joe’s unorthodox offense. Thankfully Abyss comes out and nails Crimson. Tenay says the match ends as a no contest but surely in every other case that’s a DQ win for Crimson? Well either way Joe walks off to leave Crimson to his Black Hole Slam.

Backstage interviewer of DOOM returns to speak to Kurt. Doesn’t Angle just come off as a bitter d*ck in these segments? I mean, I know that the target audience is male but surely not all bitter ex-husbands. I think people just want Kurt to move on and do something interesting. 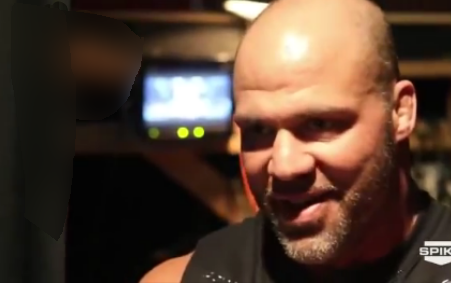 Kurt is a hero because we all know the worst thing in the world is women who have divorced their husbands.

Really what was the point of Mickie James’ speech? Nice enough to dedicate the win to the crowd but it was saccharin sweet. Could be filler I guess if the Sabin/Anarquia match finished too quickly.

Backstage we go and Bully Ray makes a big deal of potentially becoming world championship, good stuff actually. Made a really big deal of the TNA title which has seemed so secondary really to the angst ridden 3 way that’s been going on recently.

We go straight into that very match. Taz brilliantly puts across that Anderson has had tons of rematches so why is he complaining. Tenay covers by saying they haven’t been one on one but since adding someone into a rematch is so over done it holds no really water. Bully Ray brings The Pipe to the ring so we can see how the finish is going to go down. Rather randomly after Anderson does his entrance we get Jeremy Borash, who has all his features in about 10% of his face, still announce all the competitors. Rather dull 3 way match in reality up until the Ref bump, allowing Bully to use the pipe on Sting, AJ styles runs in and beats up Bully which allows Sting back in with the pipe shot and pin attempt on bully ray. Brian Hebner not quite fleet enough on his feet so Sting rolls Bully up for something like a 7 count as Sting wins. Last shot before we head to the reactions was quite cool of Anderson coming up from the ring with the pipe like Godzilla. But we go to commercials and then to the backstage interviews? Waste really..

Mother Bully Ray makes a really odd promo saying he thinks now AJ styles is attacking him for no real reason despite even the backstage interviewer of DOOM pointing out he tried to end AJ’s career. 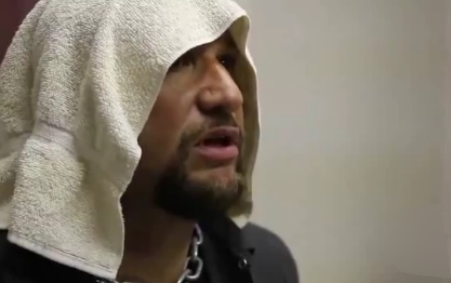 Basically I couldn’t work out whether to make a Star Wars joke, a Tazz reference or stick with the Mother Theresa thing..

Steiner next. Another piece of gold as he asks who’s afraid of a basket ball player besides another basketball player or… Batman? I think it was Batman., who really knows half the time with Scott.

Is it right that I’m starting to feel sorry for Jarrett? Karen I think needs to try and be less of a bitch to him or it just makes it seem like Jeff is only putting up with her to get at Kurt which goes against all the previous stuff they’ve been hyping up based on real life. The mere fact the angle seems to be rolling towards Karen getting in the ring is like a huge bucket of manure hanging over this angle as well.

Velvet Sky… I’m bracing myself already.. “How dare her?” not a great start. How dare she call Velvet a slut and then say “look at me” when she’s dressed like a 2 dollar whore? Trash really, awful promo. Visibly disintegrated on camera as her mind went blank…. well blanker than usual anyway.

Back to Karen and Jeff? Jarrett puts it best with the last line of the show “It’s a bunch of crap”. I couldn’t have put it better myself.

I’ve read a lot of people saying last weeks show was awful and in reality it’s wasn’t as bad as all that and it certainly wasn’t as bad as this weeks show. The fact that Steiner pretty much saved it shows really how poor the product is at the moment. The fact that Love no selling is the most interesting part of her feud says it all as well. Daniels and Sabin were criminally used to put over to wrestlers that no one cares about. Joe was put in a nothing match as well but at least he didn’t have to lose to Crimson. Yet again there was zero X division action and the Knockouts were reduced to a couple of meaningless promos and being bit parts to Karen Jarrett. TNA have things that are different or better than the competition but they simply aren’t using them. It was a chore to get to the end of this week and we’re still far enough away from Sacrifice that any new builds are going to end up rushed and undercooked compared to the poor efforts that have had nearly 2 full weeks devoted to them since Lockdown.