By Dave Caffrey
Video Game Reviews
This page contains affiliate links. At no additional cost to you, we may earn a commission if you click through and make a purchase. Learn more

WWE All Stars is the first game by THQ San Diego (the former Midway Studios San Diego), from the same team that developed TNA Impact, lead by Sal Divita who also developed WWE Wrestlemania : The Arcade Game all those many years ago. If you are expecting an update of the annual Smackdown vs Raw series with some legends thrown in, then you couldn’t be more off the mark. Gone are the overwhelming amount of options and modes from the Smackdown series that tend to distract the player from what a game should be about. Gameplay. And for that, WWE All Stars is right on the money. 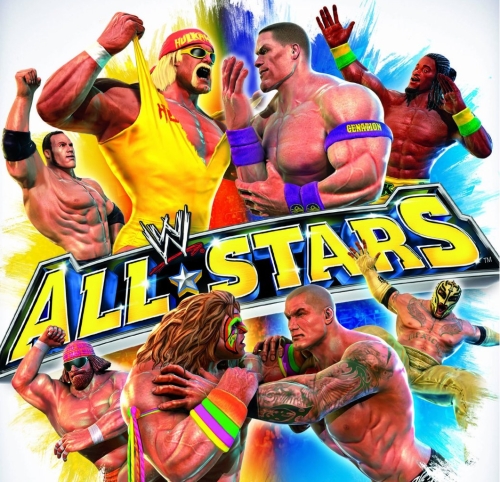 The first thing that you’ll notice about this game is the visual style, the characters look like the old WWF action figures that have taken an extra generous amount of steroids whereas the arenas don’t look that dissimilar to what you would expect from a Smackdown game. 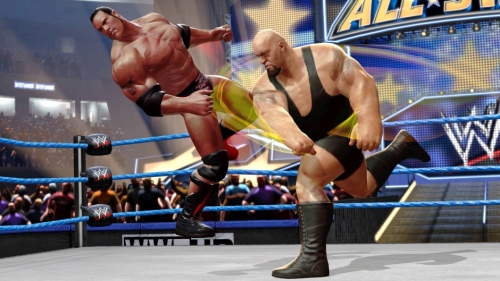 The modes are very limited however,  bar the very bare bones One on One, Tag Team, Handicap, Cage and elimination style matches, there are two ‘main’ single player campaigns. The first being a Road to Wrestlemania style ‘Path of Champions’, without the style. You can face either Undertaker, Randy Orton or HHH’s favourite tag team – DX. There really isn’t a whole lot to say about these three paths only that you’ll fight ten random matches to reach your goal in each tier, your goal being a final match with either three. In the second mode it’s Legends vs Superstars in ‘fantasy warfare’. There are 15 matches to unlock here where you choose either a legend or a current day superstar in a dream match. There’s nothing in this that you can’t choose from the exhibition menu but it does have a build up video before each match. These videos are superb, it’s well worth playing through this mode just to see them. Online seemed to be really enjoyable too, with little or no lag whatsoever but there’s not much to it either, the standard player match modes and a leaderboard is all you’ll get. 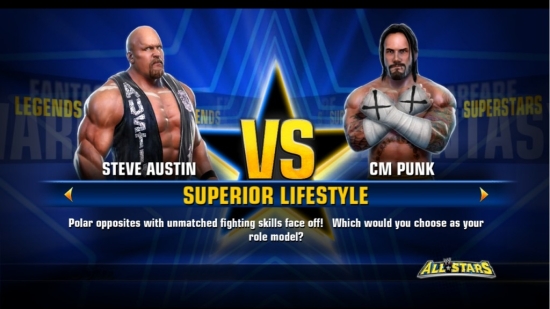 The superstar selection screen is right out of Tekken or Streetfighter, it is in essence a fighter select screen which is what this game is, a fighting game not a wrestling sim. Once you can come to terms with that then you’ll find a lot of game here hiding under the skeleton amount of modes and options.

The controls are far deeper than any other WWE release including the much heralded No Mercy, from which the controls here borrow heavily from. The game is tough, there’s no doubt about it. I would advice dropping the difficulty for a while until you get used to all the different moves and timing of blocks. There are two strike buttons – weak and strong, two block buttons – strike and grapple, and two grapple buttons. You can charge your strike and grapple moves by holding down the appropriate button, but be careful, it takes longer to charge these than normal strikes or grabs and you are vulnerable to getting caught off guard if you do. If successful, you initiate a juggling/combo situation where you can grab you opponent out of mid air and hit move after move on him. These juggling combos are very satisfying indeed, as are the signature moves that each superstar has. These are used when you see a star in your health meter. Jake Roberts will pull of a short arm clothesline which sets up his opponent for a DDT, the finisher, which is readied by tapping the two shoulder buttons, then tapped again to unleash it where he jumps at least 15 feet into the air and crashes their head into the mat for the KO. The movesets are varied enough between the wrestlers that you don’t end up seeing the same old animations time and time again. The animations are all fluid, as they were in TNA impact. This is something this game has in spades over Smackdown vs Raw, everything flows together perfectly, every animation blends seamlessly with the next and you really cannot say that about Smackdown vs Raw. Once you are familiar with these controls and master the intricacies of the combat system you’ll find something quite special within.

The game is not without its faults however. Loading times can be quite long, the audio mix takes a little tweaking to make it acceptable and some glitches are unforgivable like falling off the top of a cage to the outside and not winning the match. These things aside, All Stars offers a refreshing take on the tired old Smackdown engine, going back to the style of controls that made No Mercy every fanboys wet dream.

WWE All Stars depth lies not in the millions and millions of modes and matches, it lies where every game’s should and that’s in the actual gameplay.