The Survivor Series is the second-longest running event in WWE history, with the tag-team elimination format being a staple of the event for most of that time. Unfortunately, WWE’s seemingly irrational hatred of anything resembling tag-team wrestling has rendered the gimmick almost redundant.

When you think back to the first few events, having an entire show of eight- or ten-man tags (with there being TWENTY wrestlers in the universally praised tag-team tag-team elimination matches) was a roaring success. It meant that most of the roster got on the card, so your favourite was pretty much guaranteed to appear, the format was used to help push people, particularly challengers to the WWF Champion, by giving midcard/upper-midcard talents pinfalls over established main-eventers. The teams also had catchy names, with vignette promos all talking about survival and what it meant to “survive” the upcoming challenge.

Some wonderful angles also sprang from the event, including my personal favourite, the double-turn of Demolition and The Powers of Pain, while at the 1990 Survivor Series, Rick Martel’s Visionaries made history by becoming the first team to win their match intact. Also at the 1990 event was a unique main event in which the face survivors from the undercard matches went on to face the heel survivors in a bout dubbed the Grand Finale Match of Survival. It’s a concept that’s genius in it’s simplicity and, to this day, I have no earthly idea why WWE haven’t used it again.

Anyway, enough with reminiscing about the past, it’s the Survivor Series in 2010 (which, ironically enough, almost didn’t survive after 2009’s show), meaning the elimination matches are scarce, but are used effectively on occasion. The previous PPV had three “traditional” bouts (two male, one female), with the end result giving us hope that Miz, Sheamus, Drew McIntyre and Kofi Kingston were ready to move on to bigger and better things. Would the 2010 event do likewise? 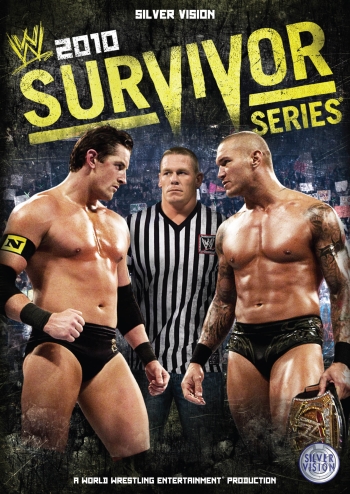 I mentioned in my last PPV review (Bragging Rights) that Daniel Bryan had a stellar couple of months in the opening match of WWE pay-per-views. Survivor Series was the location for the third in that trifecta of showstealers and, for me, it still stands as Ted DiBiase’s greatest singles match in WWE (although his greatest moment was the angle on RAW where Orton had told Ted not to fight back. If you haven’t seen it, the segment was amazing).

First of all, any excuse to have Maryse on my TV is good enough for me, but the match itself was so good, I genuinely felt that DiBiase had finally turned the corner. In my twenty years of watching wrestling, you’d think I’d have learned not to be so naïve. However, ignoring that, Ted showed more in the ten minutes he has here than he has in the rest of his entire WWE career. Daniel Bryan, on the other hand, took another step in cementing his name in the Benoit slot on the roster. Full credit should also go to the former American Dragon for adapting to the WWE way of working while also still retaining enough of his former persona so as not to alienate his existing fanbase.

It would’ve been hard to follow the opener, but John Morrison and Sheamus put on a great match as well. Again, it looked like this was going to be the match to elevate Morrison to the next level (as well as the bout where he finally puts Starship Pain behind him), but ignoring what followed in regards to both mens’ push, this is a hard-hitting brawl with a fantastic finish that the live crowd lapped up. The match itself reminded me a little of Shawn Michaels v Mankind from In Your House: Mind Games in as much as it showed Morrison could be “tough” as well as flashy and brash.

Hoping to continue the run of quality singles matches, Dolph Ziggler was up next as he defending the Intercontinental Championship against the winner of NXT Season 2, Kaval. While not a par with the first two matches, this was still a really good match, with the unique offence of both men (including a stunningly brutal cartwheel kick to Ziggler’s face) shining through and a finish that kept both of them strong moving forward. Unfortunately for Kaval, the dreaded “creative have nothing for you” excuse was wheeled out and a release was asked for by the former (and once again) Low-Ki.

Four matches in and we finally get the elimination tag that the show was named after. Why the Bragging Rights main-event isn’t the headliner for Survivor Series is anyone’s guess. Having it so close to Survivor Series is also an idiotically brainless decision. With that in mind though, the elimination match had a lot of potential, especially with the rise of the breakout star of 2010, the one and only Alberto Del Rio.

Preceded by a fantastic backstage promo by the man himself, this was another great match and gave WWE a record of four-for-four so far. ADR didn’t show too much in-ring this time out, but his ability to work the character was there for all to see.

Kane v Edge was alright, but the bad taste of the insulting angle surrounding it just makes you wish it was never happening. Whoever thought that this storyline was a good idea deserves to be fired on the spot (and the finish was a complete embarrassment for all involved). Seriously. It’s probably the same person who thought River of Darkness would be a good movie. Following on from the Edge-kidnapped-Paul-Bearer debacle, the 2-on-1 Divas Match was OK, although the return of Beth Phoenix being the highlight (I have a soft spot for The Glamazon). Sandwiched between these two was an inoffensive outing for the comedy team of Santino and Koslov as they challenged for the WWE Tag Team Championships against Heath Slater and Justin Gabriel representing The Nexus.

Unfortunately for Randy Orton, the WWE Championship match was overshadowed by the storyline involving John Cena and Nexus. A great idea in theory, the execution of John Cena being a part of the heel group left a lot to be desired (there’s no way Cena should’ve been allowed to come out to his own music wearing his own merchandise), so the night he joined notwithstanding (the reaction of the fans in attendance was very memorable), it was safe to say the storyline was a failure.

Possibly sensing this, the angle coming in was that Cena was going to be freed from his obligation to Nexus/Wade Barrett if he counted Orton out, but fired if the champion retained. Either way, he wouldn’t be a member of the group who spent a good portion of the 2010 trying to destroy him. It did add intrigue, but it’s just a shame it forced the WWE Champion to play second fiddle in the process.

With the rest of Nexus banned from ringside, we were at least promised no enforced shenanigans leading to a screwy finish. What wasn’t expected, however, was just how flat the ending of the show would be. The action from bell-to-bell was decent enough, but the whole stipulation was just too much to overcome, so everything the three men did seemed inconsequential and, subsequently, everyone watching just wanted them to get to the finish… only for said conclusion being completely underwhelming and, in the following episodes of RAW, being made both completely redundant AND, worse of all, insulting to ever single WWE fan who was meant to care in the first place.

The fact that WWE allocate almost the same amount of time as the match itself for the post-bout show close just adds to the bad feeling you have when watching this in hindsight.

A nice extra from the next night on RAW is the only extra, but it is a great extra, showing as it does the ascension of potentially the biggest new main-event talent in 2011; The Miz. What’s really interesting about it is that the cash-in is done in a more unique style. Sure, the heel takes advantage of a weakened champion (and, let’s be honest, he’d be stupid not to), but the match to crown the new champion isn’t the usual “current champion is unaware as the bell rings and is ambushed” situation we’ve come to expect.

Miz and Orton are both upright and facing each other when the bell rings, so The Miz still has to actually win it rather than steal it like most MitB winners have done. That, for me, was a better way of doing it while still keeping the face strong and allowing the heel to have his heat.

As an aside, you also get the full Wade Barrett v Randy Orton match the led into Miz/Orton.

The first half is amazingly good quality, with the first four matches all being well worth multiple viewings. Unfortunately, the second half lets the side down and, in doing so, drags the PPV down with it.

Bryan v DiBiase and Morrison v Sheamus are reasons enough to own the disc though, so, as per usual at this point, if you can pick the disc up for around £10.00, it’s worth the money. For those of you with Blu-Ray players, the event also comes with the “Old School” episode of RAW from the Monday prior to Survivor Series and the preceding edition of Smackdown too.