John Cena, from the moment he burst onto the scene and had that blistering match with Kurt Angle on Smackdown from June 2002 (meaning the man is nearing a decade with the company – just think about that for a second), has been hard to ignore. From the “trunks of a million colours” era, through the heel rapper, face rapper and non-rapping rapper gimmicks, he’s done it all in WWE.

As well as being a wrestler, a movie star and someone who has released a successful album, John Cena also does an amazing amount of work for WWE and charity by the way of personal appearances and media interviews, working a schedule that would destroy a lesser person… and doing it with a smile on his face.

Some would say he’s too nice for his own good, but when he’s top of the heap in his chosen profession, maybe, for once, the nice guy didn’t finish last. 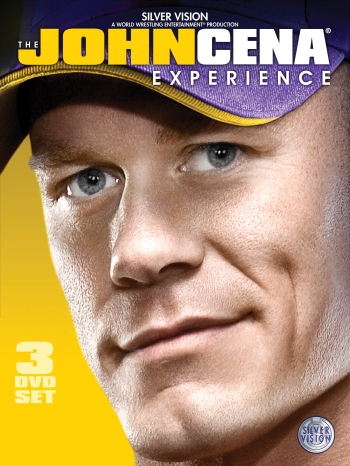 Once you get past the irony of a John Cena DVD being rated 15 in the PG-era, meaning it excludes the majority of the people who would want to own the set, you’re thrust into the world of John Cena and, like the title says, it’s time to experience what it’s like to be the former WWE Champion.

Some reviews I’ve read on this release have been negative because the main feature isn’t the standard talking-heads look at the subject’s career. Now, I’ll admit, I would have preferred to have had a documentary along the lines of the recent Ricky Steamboat and Chris Jericho releases, but The John Cena Experience does exactly what is says on the tin, so to complain about that seems a little picky.

That being said, the over-indulgent tone of the feature does grate at times, although seeing Cena leave a taping of RAW in Baltimore and head to the airport so they can fly out for Tribute to the Troops and then board a plane at 1am while eating a slice of pizza is a nice look behind the curtain. It’s also a good eye-opener to see the tedium of flying to the troops, with Cena and Michael Cole passing the time playing cards with the each other. On the other side of the spectrum, the scene where the WWE talent visit injured soldiers in hospital is both sweet and humbling.

After the TttT segment, the DVD begins it’s slide into awfulness, mainly because there’s no real substance to the documentary and there’s no real logic or chronology to the events on show. It’s an interesting idea for a profile DVD, but they haven’t pulled it off well. Whether that’s down to the subject matter or the format itself is a matter for debate.

On the second and third discs you’ll get sixteen matches for your trouble. There’s nothing from his first two years in the company and nothing after 2009 either, which means his great match with Batista from Wrestlemania XXVI is missing as is, rather surprisingly, his debut against Kurt Angle. Also bafflingly omitted are his legendary encounters with Umaga, his rivalry with Brock, bouts with Undertaker and his stellar “I Quit” Match against JBL. His stunning victory over Triple H from WrestleMania is also overlooked, but there’s a couple of other bouts with The Game in them, so that’s not as much of a disappointment.

The first nine matches being in the 4:3 ratio rather than widescreen means there are ugly vertical borders which are quite distracting, but not enough to ruin the bouts.

A curiosity in execution, there are gems among the chapters (the Tribute to the Troops stuff is great, Christian and Hornswoggle, in suits, walking together at the Hall of Fame is a little weird and seeing Cena sign 3,000 pictures for WrestleMania weekend shows the dedication he has to the cause), but a lot of it is self-indulgent and the lack of anyone other than Cena in the talking-head department hurts the main feature.

In a strange twist, it’s actually the in-ring work that’s the strong point for this collection. It’s not often you’d expect Cena matches to be the selling point, but the majority of the matches on show are well worth a repeat viewing. Hearing the old Word Life theme did actually inspire feelings of nostalgia.

The three-ways against HBK/Angle and HBK/HHH (which has a stunning opening exchange) are fantastic, while having a varied array of commentators (Cole, Ross, Lawler, Tazz and Joey Styles helps mix things up.

It’s also worth noting the changing physique of Cena as the matches progress and, in the first match, the FU looks brilliant, like he’s really trying to drive Booker through the mat. In fact, all of his offence seems better in the earlier matches, with the Protobomb, Cena’s trademark flying shoulderblock and his clotheslines all looking stiff and solid. Perhaps the man himself should watch this and turn the clock back.

Oh, and his entrance at the 2006 Royal Rumble earns a point all on its own.