By Henry Higgins
Classic WWF Reviews
This page contains affiliate links. At no additional cost to you, we may earn a commission if you click through and make a purchase. Learn more

The WWE Tagged Classics have always been a favourite of mine, mainly due to the fact you can view Attitude Era PPVs with no edits to the company name, no blurring on turnbuckles, t-shirts, titles, etc and that the atmosphere just seemed better. Sure, rose-tinted specs are worn when watching these events, but since that isn’t against the law (yet), I will continue to look back with fondness. 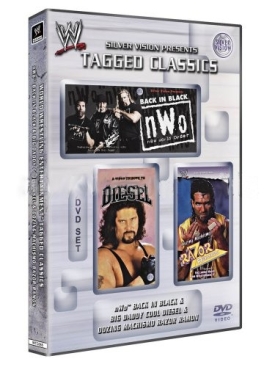 Up first is WWE’s retrospective look at the New World Order, the faction that originated at Bash at the Beach 1996 and, through various incarnations, created havoc in WCW until 2001. Even though they were around in WCW for five years, the “real” version lasted for only two… but what a two years it was.

This being a WWE release, the history is revisionist at best, with the WCW run glossed over for the most part. Of course, with so much great footage to pick from, some things had to fall by the wayside, but the sheer amount of WCW action overlooked is astounding. There’s nothing on the later groups, nothing on the Wolfpac/Black-and-White rivalry, nWo 2000, no Fingerpoke of Doom, etc, etc, etc.

The feature itself is OK for those of us who lived through it, but for newer fans who missed out, they might wonder what all the fuss is about. Eric Bischoff joining isn’t mentioned, only looked at during a group shot, and Hogan’s comment about how you could take “an average wrestler, put the nWo logo on him and make that average wrestler a star” is laughable.

Once we hit the WWF side of things (and with this being a tagged classic, the WWF logo and name are mentioned without censorship), the DVD still has half the running time left, so the less-than-one-year run with Vince gets the same length of time as the faction’s glory days, which is a complete joke. Highlights include a backstage segment with The Rock, the assault on Austin that included a breeze-block to the knee (and led to the hilarious botch where Stone Cold came out with the wrong knee taped up), the two WrestleMania matches (Austin/Hall and Hogan/Rock and a look at where the group goes from here.

All in all, it’s a missed opportunity and only the extras make this a semi-essential purchase. You get the infamous Bash at the Beach contest (the post-match promo is included also, despite also being in the main feauture), a pre-Mania tag match and the fantastically heated War Games Match that led to, in my opinion, the greatest long-term angle in the business; Sting’s transformation.

It’s hard to express how amazing the 18mth period from this match until Starrcade the following year was. For a character who spoke about three words and had no matches over a year-and-a-half to be arguably the most over persona in wrestling, you know something special had to be going on. That this entire period isn’t even mentioned on the DVD is a travesty.

Back in Black is alright, but much, much less than it could (and should) have been.

On the second disc, we have two old-school profile DVDs from the mid-90s that tie in with the New World Order DVD from the first disc. Kevin Nash starts us off as Stan Lane introduces a look at “the best of ‘Big Daddy Cool’ Diesel.” In reality, we have five matches over a 55min running time, so it’s not exactly as advertised. The match against King Kong Bundy was recorded exclusively for this release… although no-one can explain exactly why.

The opening contest is a pretty good encounter against Bret Hart for the WWF Championship. It’s paced well, both men had good chemistry and the finish was very exciting at the time (the mass run-in hadn’t been overdone by this point). Another plus point is the commentary, with Jerry Lawler and Vince McMahon on top form. That the entire feature is under an hour long, yet this match is show for its entire 20min running time, tells you all you need to know about why this is the highlight of Nash’s profile DVD.

The remaining matches vary in quality; the bout with Jeff Jarrett is good, Bundy sucks (although it’s nice to hear Gorilla Monsoon on commentary alongside Stan Lane), while Owen Hart puts in good effort as well. The closing match is from WrestleMania XI and is the only contest joined in progress. The match was a disappointment and it’s a shame they chose that to close out the DVD. On a side note, it’s interesting to note that every match is for the WWF Heavyweight Championship, which, I think, is unique for a profile release.

Razor Ramon’s release features nine matches, almost double what his nWo brother enjoyed (with double the running time to boot), but there’s a couple of stinkers among the good bouts. No Stan Lane for Razor Ramon though; this time the man himself does the introduction honours. That being said, the match against Bam Bam is an exclusive for the DVD and the commentary for this is once again provided by Lane and Monsoon. I forgot that Luna would be coming out with Bigelow and felt a little sad when she came out. Vachon doesn’t get the credit she deserved for what she did in wrestling.

The Battle Royal for the right to face off for the Intercontinental Championship was pretty heated, but unfortunately for those who didn’t see it first time around, it’s joined in progress. Truth be told, “in progress” isn’t exactly accurate as it’s joined for the last minute of the contest and then we’re straight into the IC Title match it created. This match is decent enough, but the reaction to Ramon’s victory (both his and the fans’) is brilliant… and it led to the stunner at the tenth WrestleMania.

The bout against Crush is average at best, but is lifted somewhat by a rare appearance on commentary by Johnny Polo, who we all know went on to greater success as Raven. Adam Bomb fares a little better (but I may be biased as Adam Bomb was one of my faves from the period), while nothing needs to be said about his WrestleMania X Ladder Match with Shawn Michaels – everyone and their dog knows that it’s a classic encounter that is just as exciting to watch today as it was all those years ago… and it’s here in all its glory.

The remaining of the set couldn’t hope to live up to the Ladder Match, but a generic match against IRS, a mediocre outing against Double J and a complete stinker opposite Yokozuna add up to an extremely disappointing end to the latest Tagged Classics release.

As with all the Tagged Classics, the odds are that if you’re an older fan, you’ve most likely seen the majority of what’s on offer. For the younger fan, however, this is a great way to catch up on what you’ve missed over the years.

This isn’t an essential purchase, but at a retail cost of £12.99, you could do worse that spend a tenner to add it to your collection. The nWos section has some good matches amongst the extras, but the main feature is woefully lacking in content considering how much of it, even from 1996-1997, was top-notch, while the two character-specific releases will depend on how much of a fan you were of Diesel and Razor Ramon. Me? I was a huge Diesel mark, even going so far as to buy his official gloves (and I still have them to this day).

The commentary is varied, with contributions from Jim Ross, Jerry Lawler, Vince McMahon, Randy Savage, Johnny Polo and Gorilla Monsoon all being top notch. The quaint pyrotechniques of the era also brought a smile to face, as did the level the fans were into all things WWF back in 1993-1995.

For the price, this is worth a look, mainly for the War Games match, the WMX Ladder Match, the Hogan heel turn and Diesel v Bret Hart.