Monday Night Raw. For a lot of you, this show has been an institution, on air since you started watching wrestling. For others, like myself, it was a breath of fresh air in the world of televised pro-wrestling. For a start, the show was live, which was a very unusual concept back in the dark days of 1993. From humble beginnings, the show has been on air now for almost twenty years, with (as of the date this is being written) 920 episodes under its belt and shows no signs of leaving the airwaves any time soon. Hundreds of wrestlers have graced a RAW ring, numerous in-ring announcers, commentators, backstage interviewers, referees, managers, valets, wives, girlfriends, sons and daughters have featured on the show and this is the first in what should be a series of looks at the phenomenon that is Monday Night RAW. 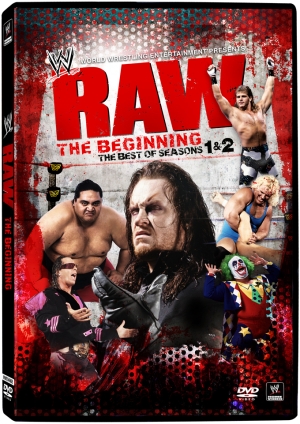 When I first heard that WWE would be releasing DVDs devoted to RAW, my mind immediately went to the Monday Night War era, so it was with a heavy heart that I greeted the news that we would be starting at the beginning AND that the release of subsequent years were dependant on how well Series 1 & 2 sold. After viewing the set, however, I can say I was wrong. Sure, there was a lot of dross in 1993-94, but the same can be said for any year, so credit to whoever was responsible for choosing the content on show here as the majority of it is well worth watching (or a repeat viewing for those of us jogging down memory lane).

It was inevitable that Yoko v Koko and Undertaker v Damien Demento (I still want to know what was in his kneepad) would be on the first disc, with them being the opening match and main-event of the first episode respectively. It’s also pretty cool to see future names (of varying degrees) as jobbers or low-level performers (Jason and Justin Credible of ECW fame being the two main ones I saw) and some of the matches on show would steal the spotlight even today. I’m looking at you Flair/Perfect, Perfect/Martel, Shawn Michaels/Marty Jannetty, 1-2-3 Kid/HBK, Razor/Jarrett, Owen/Doink, Owen/1-2-3 Kid, Bret/1-2-3 Kid and Shawn/Razor. In fact, the WWF Championship Match between Bret Hart and the future X-Pac is easily one of my favourite matches of all time. Both wrestlers are on fire, the crowd are hot as Hell and, on commentary, Jim Ross and Randy Savage sell the story amazingly well, with their dialogue being emotionally genuine and full of excitement.

You also get a few squashes (as was the norm of the time), some awesome segments, THE moment RAW became the must-see show (1-2-3 Kid pinning Razor Ramon), skits, characters and, rather ingeniously, little trivia facts between each chapter (for example, did you know Hulk Hogan, despite being WWE Champion in 1993 and part of the company for the first six months of RAW, didn’t have a match on the show until his return in 2002?) to keep you occupied and informed.

For what is considered part of the worst WWE era, this is a goldmine of the good and the great of that time period. Luger slamming Yokozuna on a battleship is great just for the tight jeans and t-shirt combo Lex is rocking, while the various interview segments all hold up well even today.

A few decent extras spread out over the four discs and each one is a product of their time, especially the vignettes showcasing the talents.

Much better than it has any right to be, this is a great collection and a reminder that no matter how bad a reputation an era has, there will always be those matches and moments that stand out and make you realise that it wasn’t as horrible as you remember or were told.

The matches on show range from those with curiosity value only to stunning pieces of action, while the segments are a times hilarious, dramatic or emotional (with the ousting of Bobby Heenan managing to be all three), but always entertaining.

At four discs and over 11hrs in content, this is very good value for money and, if nothing else, you need to buy it to ensure the later years are released in the future.