The problem I often have with shoot interviews is that it can get boring sitting around for 3 or 4 hours watching someone’s head talk about their interpretation of wrestling history. I bought one with Ric Flair awhile ago and I’ve never been able to finish it because staring at Ric Flair stationary head while listening to his dry monotonous voice put me to sleep. The YouShoot DVD’s tagline is “revolutionizing the shoot-style interview” so my interest was stirred in the franchise and the promise of a Maria Kanellis interview made this a must see for me. 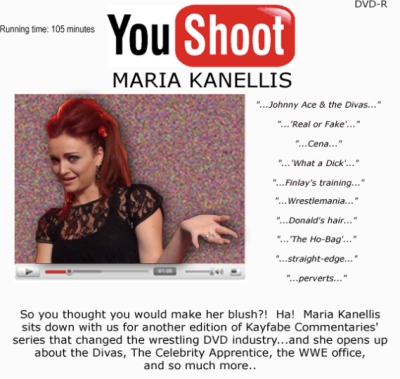 I’m not really sure if it “revolutionizes” the idea of an interview but having fans submit the question as opposed to some disembodied voice off camera reading them is a nice change of pace. Maria has good chemistry with the interviewer and the two put together an enthralling show.  Topics range from the treatment of the divas backstage, the PG era, the personalities of the wrestlers and her time on Celebrity Apprentice. Maria takes the so called “YouShoot” pledge and answers all the questions candidly, albeit it at times a little vaguely. While the questions do have a level of diversity most of them just revolve around sex.  You have to feel bad to be a wrestling fan when a number of them just turn into poorly written questions about Maria’s sex life. If fans showing less grammatical skills than a four year old don’t make you ashamed then the video where a man asks a question wearing nothing but Maria’s Playboy magazine certainly will.

The interview does descend into rather risqué material, such as when the interviewer pulls out a board with Playboy pictures and has Maria identify the Divas based on their bodies or when they start playing the “Real or Fake” game. But all of it is done in good fun and doesn’t seem to be some sort of desperate plea for sales. The issue here isn’t politics backstage or backstabbing so this isn’t some bitter revisionist history – it’s just Maria’s life. Maria comes off as a completely laid back and fun loving person, and hearing her laugh so energetic it makes you have to smile and enjoy the interview. She doesn’t seem to have heat with anyone so it can be safely said that everything she said is true. Even Cyndi Lauper, whom Maria frequently butted heads with on Celebrity Apprentice, escapes from being scrutinized.

If I had to raise one complaint it would be that it’s only 104 minutes. I know I made the complaint that it can get boring just staring at a head reiterating their interpretation of wrestling history but I was entertained enough to be left wanting more. I do feel a bit letdown considering that most of the other DVD’s in the series at least hit the two hour mark, but what is there is completely enjoyable. It doesn’t have any high production values, but that lends itself to the laid back atmosphere.  If you’re a fan of Maria buy it because you most certainly will enjoy it – just be forewarned that it does have some mature content.