Ricky Steamboat is, unfortunately, a wrestler who the majority of people reading this review will have seen very little of outside his mini-comeback last year. Hopefully, with this three-disc set, that’s a statistic that will change dramatically. 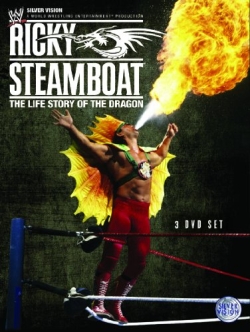 Disc one is devoted solely the documentary piece focusing on the man himself. It follows the usual WWE Profile DVD release of a short burst from various moments of the wrestler in question’s life, replete with talking-heads, before moving on (literally) to the next chapter in his career. Now, I don’t say that in a negative light; for me, when done right, it’s brilliant in its execution.

Sadly, the doc is only 70mins long, so a lot is crammed into a short piece of time. Ideally, this could have run for the same length again and kept my interest throughout; Steamboat is that much of a joy to listen to. The ream of talking-heads must also set a record for the amount of people crammed into a DVD release.

For someone who’s had a twenty-plus-year career, a lot is glossed over due to time constraints. That being said, there is also a lot of content crammed into that hour of footage. From Ricky growing up as an military brat, to actually being from New York and not Hawaii as billed, all the way through his runs in the various territories before reaching WWE for his first run with the largest company in the world, very little is actually missed.

Surprisingly, especially considering the cover image, the second run with WWE, the one where he dressed in the wings and blew fire, is given only the briefest of mentions… and even then, only to say how much the whole idea sucked. It’s not often Vince McMahon will allow his own creative process and company to be overshadowed by footage and work from his (at the time) competition, but Ricky Steamboat is an exception and an exceptional talent.

The second and third discs are all matches from the career of “The Dragon” and they run in chronological order. Each of them are good-to-great in their own right, with hot crowds, hot action and, in Ricky Steamboat, the best seller in the business. Highlights of the second disc are the bouts against Don Muraco, Ric Flair (natch), Jake Roberts and Randy Savage. On the last disc, the bout with Flair is phenomenal, his clash with Lex Luger being better than it had any right to be, the Iron Man Match against Rick Rude is one of those bouts that deserves to have seen by everybody, but has only been seen by about twenty people, his outing against Steve Austin is a clinic and, to close the entire set, his you-have-to-see-it-to-believe-it match against Chris Jericho at Backlash 2009 shows what a natural talent the guy is. As they say during the documentary, to have a guy who hadn’t wrestled in 15yrs be in that kind of shape and be able to keep up with a much younger talent, well, that’s the perfect way to end a great career. The alternate comedy is alright (more for Steamboat’s insight looking back), but Matt Striker can be a tad annoying.

All in all, this is a great way for those who missed him the first time to catch up and find out what all the fuss is about when it comes to Ricky Steamboat. Bret Hart said it best; “if you want to learn how to wrestle, watch Ricky Steamboat.”

The extras are pretty much just deleted scenes from the documentary and the titles of the various chapters tell you all you need to know. That being said, the Becoming the Dragon vignette is hilarious, the interviews on Tuesday Night Titans are interesting (WWE should actually revive this format in updated form – it’d be a great way to get wrestlers over with the fans) and, the icing on the cake, we get the full Hall of Fame induction to boot. An emotional twenty minutes for one of the most deserving talents to ever lace up a pair of boots.

The documentary is too short, which is a big negative straight away. Ricky Steamboat deserves better. What is here, however, is fantastic. Plenty of extras to get your teeth into, a complete Hall of Fame induction and a catalogue of matches that are arguably second-to-none.

From images of seeing Ricky Steamboat with a moustache to finally getting to watch Jay Youngblood in action, this is a great collection from WWE. The talking-heads all seem to belong and have a point in being there (even Steve Lombardi, who gets crowbarred into every release ever, actually belongs in this one), the vignettes are cheesy or brutal, having Jake Roberts on my screen is always a blessing and the matches themselves are worth the price alone.

Regardless of your feelings towards WWE programming, the company rarely fails to impress with their profile releases, especially the ones on retired talent. This is no exception and stands up there as one of the best.