Once the spot-fest highlight of the WrestleMania showcase, Money in the Bank was a chance for a number of WWE wrestlers (anything between six and ten guys) to get on the card, make their mark on the show and, for one of them, the promise of a future World/WWE Championship run.

Ever since Edge cashed in his contract in a legitimately shocking moment, the holder of the case has gone on to win the big one. As you read this, Miz became the latest man to achieve this goal with a very heated win over Randy Orton to garner his first WWE Championship.

With the exception of Rob Van Dam, who announced his intentions in advance, and Mr. Kennedy (who said he was going to wait until WrestleMania the following year – although a misdiagnosed injury put paid to that), every single person who has won the match has used the element of surprise to reach the top of the mountain. CM Punk did it brilliantly two years running, first on the heel Edge and then against the face Jeff Hardy, going on to turn heel himself in the face of the genuine hypocrisy of the fans (they cheered when he did it to Edge, yet booed Punk when he did the exact same thing to Jeff Hardy). Some have gone on to stay in the main-event after cashing in, others have actually taken a step backwards (I’m looking at you, Swagger), but winning the MitB match is usually a sign WWE is backing you for bigger things.

With that in mind, Money in the Bank has stepped out of the shadows of WrestleMania and is going it alone. Was it the match itself or when it took place that made it special? That is the million-dollar question. 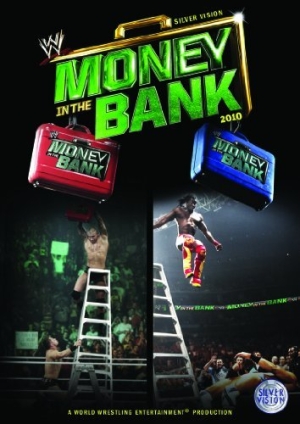 The show opens with the Smackdown-only Money in the Bank Match and it’s an awesome encounter with great spots from most of the guys involved; none more exciting that Kofi Kingston hitting the Boom Drop onto Drew McIntyre through the commentary table from the top of a ladder. The result was surprising, but the fans inside the arena approved and sometimes that’s all that matters.

The following two matches weren’t given enough time to really do anything other than come to an end. The Divas did OK with their 5mins, but the WWE Tag Team Championship Match between The Hart Dynasty and The Usos should’ve been given a lot more; especially when you consider that both teams feature third-generation talent and a ready-made storyline rivalry stemming from that.

Jack Swagger v Rey Mysterio was a very, very good match, with both men gelling well together and putting forth a fantastic example of using a match to tell a story. The finish was nicely worked and the ending was a nice surprise that led to the best run of Kane’s unmasked career.

Going from the sublime to the mundane, the fifth official match on the card was given a paltry four minutes, so, like the women who went before them, there was no real time to make an impact or tell a coherent story to draw the fans in. The same, however, couldn’t be said for the second Money in the Bank match of the night.

The RAW before the PPV, there was a match between Edge and Orton to hype this bout. Orton pinned Edge and then Jericho ran in and landed a Codebreaker on him. At the same time, Evan Bourne appeared and spin-kicked Orton in the face. The youngster then went up to hit his Shooting-Star Press… ONLY FOR ORTON TO COUNTER IT INTO AN RKO MID-MOVE!! It was simply amazing to see and one of those rewind-rewind-rewind spots you could watch forever.

This added a lot of hype to the MitB Match as there were potentially three or four legitimate contenders for victory and all eight men didn’t disappoint. Highlights include Evan getting revenge on Orton (when Randy hits another RKO, Bourne lands Airbourne straight away, leaving Orton no time to get back up), the standard multiple-people-on-the-ladder situation and a VERY popular winner at the end. Just in case you’ve been living under a rock for the last six months, I’ll just say that I thought it was “awesome.”

Very little could’ve followed such a great outing, especially with such a popular result, so it’s no surprise that Cena v Sheamus proved to be a mild letdown. The focus was more on what would Nexus do rather than the match itself, while the Steel Cage setting seemed to limit the two wrestlers. Add in that it followed a much more exciting stipulation and you had, despite the best efforts of both guys, with a flat end to a mostly enjoyable PPV.

Two extras on the disc and they’re both home-release exclusives. The first is a short interview with Kane backstage after his MitB cash-in and it’s a nice little promo. Kane gives justification as to why he did what he did and what the World Heavyweight Championship means to the character and why it’s important.

The second extra is a four-minute showing of what happened after the event went off the air. Nexus pick themselves up as Barrett expounds some verbal energy being (hypocritically) disgusted with Cena’s actions. Again, it’s nothing special, but it’s a nice little peek at what, until now, only the fans in attendance got to see.

Personally, with this being the first release dedicated to Money in the Bank, an extra on the history of the matches and the case itself, with footage of each WrestleMania outing and subsequent cash-in seemingly the most obvious addition to the party… unless you actually work in the department responsible for putting these things together, that is.

Much better than the previous PPV, this featured three great matches, a first-time-ever cash in on the same night, a true breakout moment in the other MitB and the realisation that there actually is a lot of young guys ready to shatter the glass ceiling if WWE would only let them.

The backstage segments are OK, but are your usual WWE fare, while the main-event encounter closed the show on a downer, which is a shame considering how the two titular gimmick matches fared so well.

With word around the camp-fire that the Money in the Bank Match will be returning to its spiritual home of WrestleMania, this PPV event may join the likes of Taboo Tuesday and New Year’s Revolution as defunct shows that tried, but failed, to make their mark.

As with most WWE PPV DVDs, this is worth buying if you can find it for around £10 or you wish to have a complete collection.