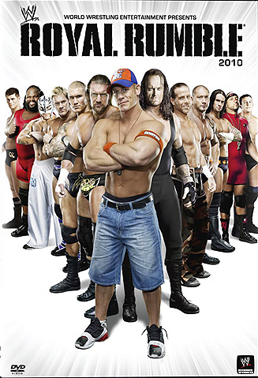 The 2010 edition begins with a great hype vignette putting over how important not only the Rumble itself, but also both the WWE and World Championship matches. Mr. Deep Voiceover claims that this is the most star-studded Royal Rumble ever, which isn’t exactly true (for my money, that honour belongs to 1992), but, to be fair, there were a lot more viable winners going in this year than there has been for a long, long time. All credit to that must go to the booking team and the storylines they had in place going in (each person who couldwin had feuds ready made for either eventuality).

The matches are all, on the whole, above-average at worse and the fact that every undercard match was for a title really helped. Christian performed a minor miracle as Ezekiel Jackson had his best match in WWE ever against the Canadian. That they would repeat this feat on ECW the following week just adds to the man’s reputation.

On the rest of the card, Miz furthered his development into one of the most well-rounded performers in wrestling today with a good outing against MVP (in an unannounced match added to the card by Teddy Long “on the fly” backstage) that has a great ending, Mickie James got her revenge against Michelle McCool to end the deplorable “Piggie James” angle (in a nothing bout that lasts 20secs), Sheamus and Orton have a wonderful WWE Championship Match that was marred by a disappointing finish (even if it did make sense in the long run, on the night, it really put a dampener on things) and Undertaker turned back the clock one more time to steal Match of the Night honours with Rey Mysterio. The WWE production staff (who always get at least one credit per review – it’s the law) also put in a great showing with the pre-match video for the World Heavyweight Championship bout.

Going into the main-event, there were at least six credible winners (John Cena, Big Show, Shawn Michaels, Triple H, Batista and Jericho, with both Drew McIntyre and CM Punk being viable outside bets into the bargain), so there was one thing this Royal Rumble had over the previous four or five – unpredictability.

CM Punk is an early highlight (seriously, it’s a work of genius) and HBK’s exit is (pun intended) heartbreaking, while the match itself is exciting enough from start to finish, but at under 50mins in length from bell-to-bell, it’s too short and lacks that one “how long has he been in there?” moment as everyone seems to last very little time at all (Cena was the longest with a rather pathetic 22mins). Edge’s surprising return gets a nice reaction, but the gulf between this and John Cena’s return in 2008 is massive, maybe due to the former’s arrival being expected by the majority.

Ultimately, by the end of the night, even with the unpredictability going in, everything ends up as we’d hoped (i.e. the WrestleMania matches we were hoping for all happened due to various shenanigans on the Road to ‘Mania).

One extra and it’s a doozy! William Shatner and Bret Hart on RAW is cheesy goodness and the promo between “The Hitman” and Vince McMahon is fantastic, with the line between reality and kayfabe being blurred really, really well. At 15mins, this is well worth viewing again and again… unlike the match it eventually led to.

This is a really good PPV, with each match (Mickie v McCool isn’t a match) being worthy of the event. Miz, Sheamus, Orton, Undertaker and Rey worked hard and gave the fans their monies worth.

The Rumble itself, as I’ve said before, sells itself. Unfortunately, this one is too short and not much of anything memorable happens outside of HBK, HHH, CM Punk, Jericho and Edge. That being said, it’s not a boring match, just that there’s no old-school returners and it seems that people came in, did a bit and then got eliminated within minutes.

That being said, if you can get it at a discounted price (£12.99 or less), this is well worth adding to your collection.