He’s the Shaman of Sexy, the Friday Night Delight. John Morrison is one of WWE’s best and brightest rising stars, having held numerous tag team championships, first as part of MNM and then with The Miz. He’s also had great solo success, earning the ECW and Intercontinental championships. The DVD is packed with bonus matches, interviews, Dirt Sheet segments, and more. 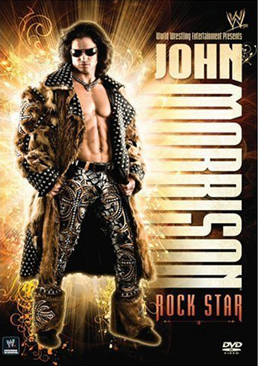 The above blurb is what you’ll find on the back of this DVD’s case, but when you sit down to watch it, you will realise that it’s very, very misleading. For a start, there is virtually nothing on his team with The Miz and there is literally nothing on the MNM trio or even the break-off duo of Nitro and Melina. The disc is NOT “packed” with interviews or Dirt Sheet segments and so much of Morrison’s run in WWE is left off, you end up wondering if this collection was put together during a tea-break from a bigger project.

For a start, I can’t remember the last time anyone got a single-disc profile release. I mean, sure, there were those single-tape releases back in the day, but since WWE kicked it into gear, most profile DVDs have been two-discs, with a lot of them spanning three. Morrison gets one… and because of that, so much is missing, there’s no real point in buying it.

As mentioned earlier, there’s nothing on MNM, but there’s also nothing on his previous run as Eric Bischoff’s lackey Johnny Nitro, there’s nothing of his stellar IC Title feud with Jeff Hardy where they traded the belt over a number of months and actually made that belt seem important again. Even the match that arguably made him, the shocking ECW Championship win over CM Punk (as Nitro, he wasn’t meant to be in the match, but Chris Benoit phoned in saying there was a family emergency – understatement of the year – so Johnny Nitro was the unannounced replacement), is omitted.

All of that would be semi-forgiveable if the highlight of his WWE tenure, THE GREATEST TAG TEAM OF THE 21st CENTURY *look to the upper left* and, for a long time, the only reason to tune in to ECW, Miz & Morrison were featured prominently… but even that is glossed over.

There’s an admittedly hilarious look at some of the highlights of The Dirt Sheet, but it’s not enough to satisfy this reviewer. Even worse, there’s only one match with them as a duo and, while it’s a great match, they deserve better (at the very least, the match from the following week against HBK and Rey Mysterio should be on there). Moving away from the wrestling content, the real life content is, for the most part, just as poor. The segment on John’s parkour trainingis an interesting bit of footage, but the rest of it is forgettable at best and downright stupid at worst.

All in all, this is possibly the worst DVD release from WWE since I started doing these reviews. Perhaps because it was I expected more on Morrison’s entire career rather than a 2yr window, but even taking that into account, this “collection” (and I use that term loosely) feels like nothing more than an afterthought, something to put out while there was nothing else to do.

Only one extra and it’s decent enough. Basically, Johnny Nitro is no more and John Morrison is in his place. The main curio from watching this is how different his Morrison theme is here, yet how I’ve not noticed it change (except for the addition of lyrics) in the near three years he’s been using it.

This release is for completists only. Too much is missing and what is included just makes you yearn for what was left out. To not even have a single episode of The Dirt Sheet as an extra is unforgivable and the lack of anything Nitro is ridiculous when you consider the calibre of matches he fought from the MNM debut onwards.

I cannot recommend this and you should only really get it if you can find it cheap of someone gets if for you as a gift. If you have to pay full price, then my advice is simply don’t.