Like the previous month’s Extreme Rules, WWE tweaked the name of 2009’s event, removing the words Great and American and leaving us with a PPV simply called The Bash. I actually prefer the new title (reasons for the alteration are rumoured, but the one I believe is to do with making the event more palatable to the overseas markets) and think is simply rolls better off the tongue. 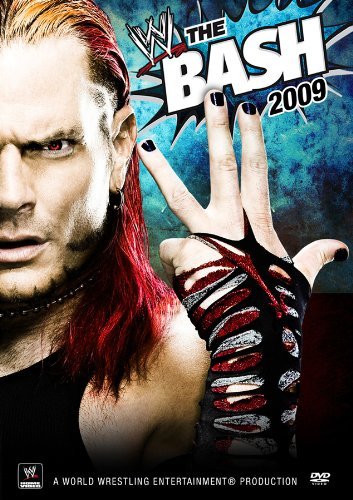 The main match I was looking forward to going in was John Cena v The Miz. In the weeks leading up to the PPV, Miz had been on fire and was easily the highlight of Monday nights. His verbal delivery and confidence elevated him to just below the main event and the big question was whether WWE would capitalise on it during the eventual one-on-one meeting between the two.

Other bouts I felt could be good were the two world title matches and Jericho v Rey. The rest of the card didn’t have anything to really get too excited about going into The Bash, but tag-title match being switched to a three-way was a nice surprise (on the night, anyway). As a side note, if you weren’t pumped for the event, WWE’s outstanding production team give us a pre-show video package that makes the main matches seem like the most important things in the wrestling landscape.

Tommy Dreamer v Christian v Finlay v Jack Swagger v Mark Henry – Multi-man matches are always a nice way to open a PPV as it allows many exciting exchanges and near falls to get the crowd excited for the rest of the night. The concept of the Scramble Match is one that I really enjoy and every one has been worth watching. This is no exception, but it is the weakest of those that have taken place so far. Not to say it’s a bad match (it’s not), it’s just not up to what has preceded it. Starting with Christian and Jack Swagger was inspired and the finisher into the last fall looked great.

Rey Mysterio v Chris Jericho – For the second PPV in a row, Jericho and Mysterio are the second match on the card and, while at Extreme Rules they were thisclose to stealing the show, easily the match of the night. An awesome evolution of their previous encounters, this had everything you could want in a title match featuring Jericho and Rey (two guys who’ve been having great matches against each other for close to fifteen years). The build to this, including the awesome sight of Jericho pretending to be a masked Rey fan in the crowd, had been amazing, as had the earlier matches in the feud, so for this to be the pinnacle of the current rivalry is quite an acheivement.

The Great Khali v Dolph Ziggler – Everyone and their dog felt that Ziggler, who had been gaining momentum and getting over with the fans, being paired in a rivalry with Khali would be the squashed-to-Hell end of Dolph’s career, but the man with Mr. Perfect’s hair surprised us all and had decent encounters with the giant. This match was no exception and kept Ziggler’s good match run going.

Carlito/Primo v Legacy v Edge/Jericho – Originally meant to be a two-on-two bout, Teddy Long coming out and making it a Triple Threat really added an interesting aspect. Add in that the surprise team was comprised of Edge (who came out first to a gobsmacked reaction) and Jericho (who came out second and really pricked up the ears of everyone watching) and you have the makings of something special. The match is good, the psychology was nicely implemented (the original teams not letting the interlopers be involved) and the finish is worked very well. The main problem is that the match should’ve led to many great things, but  an untimely injury shortly after the PPV killed that idea… although it then led to another surprisingly good development at the following month’s Night of Champions event.

Melina v Michelle McCool – A decent enough outing for the women that kept both wrestlers strong and managed to keep the interest of the fans for the most part. The highlight for me was the tilt-a-whirl gutbuster into an elevated STF variation that McCool latched on to Melina. It looked both brutal and elegant at the same time, while showcasing the flexibility of the champion.

CM Punk v Jeff Hardy – Following on from the amazing end to Extreme Rules, Jeff Hardy tries to regain the title he last held for all of five minutes. CM Punk was on the way to becoming a heel due to cashing in his Money in the Bank briefcase after Jeff had defeated Edge in a stellar 20min Ladder Match. The promos that followed from the new champion, like all good heel promos, had an element of truth and allowed the bad guy to actually be in the right (recalling Jericho’s feud against Shawn Michaels from 2008). Punk commented on how the fans booed him for cashing in against Jeff Hardy, even though they cheered him when he did the “exact same thing” to Edge the previous year, in effect proving that wrestling fans are a hypocritical bunch and it was they, not he, who was in the wrong. These two have amazing chemistry together and this match was fantastic, with a great finish (from the POV of getting Punk over as a heel and keeping Hardy strong) and leaving us thirsting for more.

John Cena v The Miz – I had extraordinarily high hopes that this would be the night that Miz stepped up to the main event, win or lose. Those hopes were dashed in the most one-sided match you could have booked outside of the old-school squashes you used to get on TV every week. In the build (again, perfectly captured by a video package from the production aces at WWE HQ), Miz was Cena’s equal in verbal confrontations and the reality star was getting across that he belonged at that level. Unfortunately, the match didn’t follow suit and Miz was, in effect, shafted. He’s recovered now, but that doesn’t change the fact THIS was meant to be his time to shine. The fact this was given less time than the Women’s Championship match is ridiculous. A disappointment in every way possible, but at least a lot of the fans had the good sense to boo the outcome.

Randy Orton v Triple H – It makes me sound like a broken record, but I don’t care; the WWE production staff have the ability to make matches seem more important than breathing and with the video package they put together for the main event, they excelled even their own lofty standards. Also exceeding standards were Orton and Triple H. They’ve faced each other many, many times in the past (some good, some great, some downright offensive), but they put forth a great effort in this three-fall match. Shocks, great psychology, a compelling story, an ingenious transition from the first  and second falls, a tense finish and two wrestlers determined to live up to their billing, this is a fitting close to another good wrestling show.

Segments – Teddy Long and Mr. McMahon have great chemistry in their backstage segments and the one at The Bash is another nice chapter in the “Teddy is on probation” idea. “Conspiracy theory” Jericho is always good fun, as is angry Edge when he’s backed into a corner, so those two stints in the GM’s office are also worth watching.

Another PPV release and another disc with only one extra. The potential to have a classic match from past GABs is there, so why not take advantage of it? Even the events following the outcomes of the matches on this card could have provided one or two extras worth including, so to overlook that is, again, a bit of a downer. The extra we do get doesn’t even have Tony Atlas laughing, so there really is no point in it being there.

Another good PPV from WWE, with four really good bouts, one piss-take, Khali in a decent match and a surprisingly enjoyable women’s bout. Everything, for the most part, followed a logical path and most of the matches set up further rematches down the line. That Rey v Jericho isn’t one of those rematches is a shame, but you can’t win them all.

WWE’s production staff must’ve worked overtime to get all the astounding packages ready for this show, with the ones for Miz/Cena, Triple H/Orton, Punk/Jeff and Rey/Jericho deserving special mention.

All in all, this isn’t as essential a purchase as it could’ve been, but if you can get it at a decent price, I recommend you grab it for the IC Title match and the two World Championship matches.