The One Night Stand name was officially dropped for the first time, WWE deciding to go simply with Extreme Rules. In fairness, it’s a more logical title, especially considering the origins of the previous name. As with 2008’s event, all the matches on the card were fought under various stipulations, with only one of them being a stinker (literally as well as figuratively), one being passable and the rest varying from good to great to astounding. Oh, and the finish to the entire show (which I predicted in a discussion about what Punk should do with his Money in the Bank opportunity) was a brilliant end to the show. 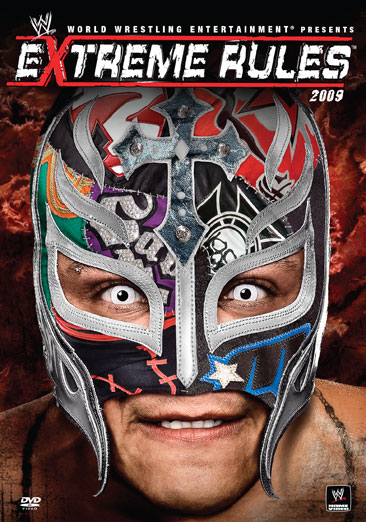 “One Night Stand began as a tribute to the original ECW promotion that ran from 1993 until January of 2001. The show was meant to be a one-off (hence the title), but when it became one of the highest-grossing PPV events in WWE history, as well as being a massive critical success, it was only logical that it became a yearly event.

The first ONS, broadcast in June 2005, was as close to an ECW PPV as you are ever likely to get (and is one of my favourite wrestling events ever), the second maintained most of that original feel, but was mainly used to launch the new ECW on Sci-Fi television show. After that, the event became just another WWE PPV, but kept the “extreme” element by having only stipulation matches on the card.”

It seems that with every PPV review I do, I extol the virtues of the WWE production team, but it’s with good reason that I single these guys and girls out for praise. The opening video of Extreme Rules is another example of one field where WWE is light years ahead of everyone else. It sets the tone of the various top-line matches and gives them a sense of scope far beyond what you’d expect.

As this is my first review submitted for 2010, I thought I’d change it a little bit and simply give my brief thoughts on the matches and segments, rather than go into great detail about them, just in case you haven’t seen the PPV. With that in mind, if you can leave me comments on whether you prefer this format or the old way of doing things, that would be great.

Kofi Kingston v MVP v Matt Hardy v William Regal – A really solid opener, with fast-paced exchanges between the wrestlers and near-falls galore. Matt Hardy, wrestling with a legit hand injury, was the MVP of the bout, with MVP himself not far behind. Regal got little windows to shine and Kofi was still in the process of getting over with the fans, but they all gelled together as well as you can in a four-way clusterbomb. The finishing sequence was nicely worked and rounded off a nice show starter..

Rey Mysterio v Chris Jericho – The pre-match hype video reminded me of how great the build for this match was and how great the ongoing feud was in general. This match obviously had the “anything goes” stipulation to differentiate it from the other bouts and even though it falls short of their Mask v Title match the following month, it’s still an excellent encounter. Oh, and special mentions to both the finish and Jericho’s promo during his entrance. A master at work is always a joy to behold.

Umaga v CM Punk – A better match than I expected it to be, not because of the wrestlers involved, I enjoy(ed) both of them as in-ring competitors, but the stipulation isn’t the most exciting. The lead up to the match was great (and expertly covered by the WWE production team) with Umaga attacking Punk week after week, usually just as he was about to cash in his MitB briefcase (we’ll ignore the fact Umaga spoke perfect English). The saddest part of the bout is that this is the last televised match of Umaga’s career, something that adds a touch of poignancy. As an aside, whoever came up with the idea of an on-screen graphic to represent the touching of the turnbuckles deserves a bonus.

Christian v Tommy Dreamer v Jack Swagger – The main aspect of this match was that Tommy Dreamer said he would retire if he hadn’t won the ECW Championship by the time his contract expired. A convenient one-day extension to that contract meant that, as luck would have it, the night of Extreme Rules would be the last chance Dreamer had to save his job. I’m a huge fan of Swagger and hate the way he’s been reduced to almost nothing on RAW, but at this point in time, he was still worth something. Christian has been immense since he returned to WWE, so he was always going to do well, and Tommy Dreamer had his best outing in years, so the match exceeded initial expectations, with the hardcore elements being nicely timed and used with a purpose rather than just being a case of hitting people with things for the sake of it. The finish made me smile and the fans inside the arena appreciated it as well.

Vickie & Chavo Guerrero v Santina Marella – As a match, this sucks as much as a match can suck, but as an excuse to laugh at Santino’s antics, it does its job… let’s just leave it at that.

Randy Orton v Batista – This was a very disappointing match, considering the build going in and the assaults on Batista by Legacy. For a WWE Championship Match to go so short, and so one-sided, it needs to be something special and this was nowhere near being something special. Considering who was in the bout, and that it was a cage match, the disappointment felt makes this the worst match of the night (I don’t consider Guererro/Marella a match, per se).

John Cena v Big Show – I wasn’t looking forward to this match when it was announced. If there were two main-event level wrestlers who I felt couldn’t work together in a Submission Match, it would be these two, but Cena and Show surprised me. The storyline going in (again, encapsulated perfectly by the production team in a vignette) made it interesting from the POV that Cena couldn’t lock in the STF on someone the size of his opponent. Add in to the mix that Show had added a new (and brutal looking) submission to his arsenal, the Colossal Clutch, and you ended up with an amount intriguing potential going in. The match itself went far too long, but it was better than it had any right to be and the finish was a minor work of genius (even if it the ropes didn’t do what they were meant to).

Edge v Jeff Hardy – Easily the match of the night, probably helped by the fact both men know each other so well and have faced off against each other in this environment on a number of occasions. Risks are taken, tables are broken and the fans are on the edge of their seat from beginning to end… and what an end it is. I’ve rarely got so excited for a finish in recent years and this is the perfect example of setting up for the future with a single stroke of ingenuity. For the umpteenth time, the pre-match video showcase the WWE production staff as the best in the entertainment industry. Worth watching just for the counter to Edge’s spear.

Segments – The three backstage interviews are as you would expect (Christian’s is the best of the bunch), but the two non-interview segments with Chavo and Vickie Guerrero suck majorly.

One measly interview by Josh Mathews, that’s all we get? Nothing following on from the controversy of the main event and how the characters who were a part of that controversy reacted? For it being one of the moments of the year, for that to be overlooked, considering it catapulted CM Punk into the legitimate main-event bracket, is a joke.

An above-average PPV that is better than the 2008 version. Dropping the One Night Stand name is a logical step (as it’s obviously not a one night deal seeing as how this would’ve been the fifth One Night Stand had they kept the title. Eight matches on the card, each with differing stipulations, keep things ticking over nicely, with five of them being good or better (the main event is worth the price of the DVD alone).

The lack of extras is a bit of a pain, especially considering the fallout from all the happenings at Extreme Rules, but for the event itself, this is good value for money.