Hulk Hogan: My Life Outside the Ring Book Review

The problem with wrestling autobiographies is that time and time again wrestlers prove that they are not a reliable source when it comes to history. WWE in particular gets plenty of criticism with their books, mainly around their attempts at revising history or because the author is “compelled” to write the book in character. Of course on the other side of that coin you have the independently released autobiographies that tend to fall on the side of veteran wrestlers bitterly talking about how things were better in the past. To be honest, I have no idea what side to take because both sides have released some amazing books and both have released some absolute flops. This issue made me moderately interest in Hulk Hogan’s new book, ‘My Life Outside the Ring’, because to the best of my knowledge Hogan is the only wrestler who has both written an autobiography for the WWE and released one independently. Maybe by the end of this we’ll be able to see if the independently released books are better than the WWE released books. 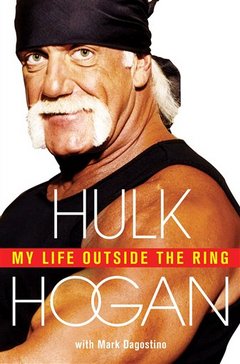 I very much doubt that I need to explain to you who Hulk Hogan is, considering the man is to wrestling what The Beatles are to music. But if you haven’t been paying attention to his life in the past few years then this book will come as a surprise to you. To summarize, Hogan’s wife Linda left him after an affair became public, and merely a fortnight after their son Nick had gotten into a car crash which reduced a family friend to permanent vegetative state. From there Hogan and Linda entered a bitter divorce battle while Nick Hogan was tried for his friend’s injury as a result of the car crash. And at the end of all this, Hogan decided to write a book about the events.

‘My Life Outside the Ring’ is the latest in Hulk Hogan’s bid to remain culturally relevant, and it paints a different picture of the Hulkster’s life that neither his previous book or that god-awful reality TV show would have you believe. If for some reason you were expecting a cheery book, prepare to be sorely disappointed. To put you in the right mood for the entire book Hogan begins by retelling when he contemplated suicide and then jumps to his son Nick’s car crash, which in his own words began the downfall of his life. From there he talks about his earlier life, how, his discovery of steroids and his break into and career as a wrestler before moving to his post wrestling life.

What I found mildly humorous about the format of the book was that it was set up almost like a Hulk Hogan wrestling match. If you’ve ever seen one, you’ll notice that there is usually a point where Hogan gets beaten down by the opponent looking like he’s close to being beaten only to “hulk up” and shake off any pain to go on and win the match. And that’s ‘My Life Outside the Ring” – Hogan reaching the low point of his life only for a miracle to happen and him to rise up and overcome it.

One could argue that Hogan wrote this book for a lot of different reasons. To his own admission, he’s low on money because of Linda’s rich lifestyle and his legal troubles as of late so he probably just saw the opportunity for some easy cash. Hogan does talk a lot about his son’s car crash, trying to tell the truth about the car accident that he was in. Despite these possibilities, I can’t help but feel Hogan wrote this with the purpose of attacking his now ex wife Linda. She’s presented as literally psychotic and by contrast Hogan is presented as the innocent husband. Now if all this is true, Hogan definitely deserves your sympathy because the man has been through hell. But remember that his grasp of history might be a little biased because of the woman who he loved for 22 years was trying to take every penny he had, so I’d be careful about Hogan’s interpretation of his history. And with this lengthy divorce battles and his sons legal fee’s mounting up, I’d argue that Hogan wrote this as a cash-in on his family’s troubles.

Speaking of history, that’s another knotty issue with this book. One of my biggest problems with ‘Hollywood Hogan’ was that Hogan would up and rewrite history at points to suit his own purposes (alright, a lot of, if not all wrestling autobiographies do that). Well he’s still up to his old tricks. He’s still deadset on the idea that he invented the concept of entrance music and now he’s claiming that he had to personally teach Vince McMahon everything about how the wrestling world works. I don’t see how much Hulk Hogan could teach Vince McMahon about the wrestling business that Vince didn’t already know, considering Vince had been connected to the wrestling business a lot longer than Hogan.

However without the WWE’s grasp about what he can and can’t publish is noticeable as he’s no longer required to drop random praising of Triple H. Actually the only time he makes any real mention of current wrestlers is when he criticizes their inability to follow the crowd`s reaction in a match. Also different from ‘Hollywood Hogan’ is the fact he speaks about his darker parts of life so nonchalantly – when talking about his adultery, suicidal thoughts, and cocaine use he’s so at ease and straight forward with everything he could be talking about the weather.

When reading ‘Hollywood Hogan’ I got the impression that Hogan was trying to reaffirm the myth of Hulk Hogan as someone who was larger than life. ‘My Life Outside the Ring’ is trying to undo that myth – to show that Hulk Hogan is just your average man who just happened to have a job that turned him into a superstar. Throughout the book a recurring theme is how much he loved his simple life and how he could easily return to his pre-wrestling days of living in a van by the beach.

At time of writing this review however, Hulk Hogan is set to debut on TNA Wrestling which will go head to head against Monday Night RAW for the first time ever, possibly in hopes of starting a second Monday Night War. The man has given his life and body to the business and knows all the dangers associated with it – yet he’s still willing to jump into the middle of the professional wrestling scene. This is the weird thing about Hogan, he flips randomly between decisions throughout the book. He claims he could easily live as a hermit, but here he is signing with TNA and trying to create interest in the business, with the probable hope of making money from this endeavour.

What’s really bewildering is that he spends the whole book whining about how Linda mistreated him and how he was abused only to turn around and say he still loves her, wouldn’t trade the time he spent with her and hopes that she can go and live her life. If you’re going to rant about someone for half a book, why repent in the last chapter?

In the end a review boils down to one thing – is it good? And ‘My Life Outside the Ring’ is good. Hogan and his ghost writer did an amazing job in writing this book so that you’d be interested in what he had to say next. As for that whole issue of whether or not an independently released book is better than a WWE released wrestling book, it’s still hard to say. While Hogan is allowed to talk more freely then while under contract to the WWE, he also doesn’t have anyone to control his “storytelling”, so that issue isn’t laid to rest yet. At any rate it’s certainly an improvement on ‘Hollywood Hogan’ and I wholeheartedly recommend it.