A lot of people are dismissive of the “B-level” pay-per-views, but you usually get at least two or three good bouts and a few decent ones as well. Judgment Day 2009, on paper, looks to have one of the better cards for a non-Big Four event. The Chicago crowd also deserve a heap of credit for being up for it pretty much from the first blast of the opening pyro. 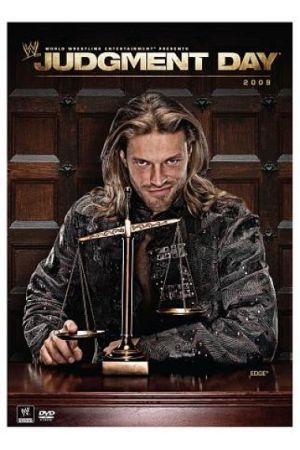 Judgment Day: When the Son of Man comes in His glory, and all the angels with Him, then He will sit on the throne of His glory. All the nations will be gathered before Him, and He will separate people one from another as a shepherd separates the sheep from the goats, and He will put the sheep at his right hand and the goats at the left. Then the king will say to those at His right hand, “Come, you that are blessed by my Father, inherit the kingdom prepared for you from the foundation of the world; for I was hungry and you gave me food, I was thirsty and you gave me something to drink, I was a stranger and you welcomed me, I was naked and you gave me clothing, I was sick and you took care of me, I was in prison and you visited me.”… “Truly I tell you, just as you did it to one of the least of these who are members of my family, you did it to me.”

WWE Judgment Day: When the sins of the wicked come back to haunt them, with no place to hide and no quarter to be given. What they have wrought on others will be wrought on them tenfold. Mistreat their brother and the wrath of the Lord McMahon will strike them down where they stand… and the Four Horsemen of the Apocalypse will carry their souls to the bowels of Hell.

Inside a structure of steel and rope, the ultimate prize will be decided, and only one man can escape into the glory of the people. For the other, the pain of defeat will linger forever more. The Age of Orton or The Animal; Batista or Randy Orton, who will reach the Promised Land of the WWE Championship… and who will fall into the depths of despair?

The most feared of the Horseman is Death; a being incarnate in the form of The Undertaker here in WWE. Can Edge, the embodiment of cunning and deviousness, overcome his impending doom and reclaim the World Heavyweight Championship against a man who has no fear? With Jeff Hardy standing between him and the title vacated, the Fearless Enigma  will have to be overcome… if that is even possible.

Judgment Day is here… make peace with your chosen creator while you can.

The first bout is that rare commodity, a match-up we haven’t experienced before. The video package preceding it is short, but does enough to draw you in to why CM Punk (who, unsurprisingly, is super-over in his home town) and Umaga are fighting it out. It also helps that both men compliment each other’s style and put on a really good show-opening bout, a bout announced well by Jim Ross and Todd Grisham. The finish is my favourite sequence whenever Umaga is involved in a contest.

After a great opener, the show continues on an astounding roll with the next three matches. Christian v Jack Swagger (for the ECW Title), John Morrison v Shelton Benjamin and Rey Mysterio v Chris Jericho (for the IC Title) are all really, really good bouts, with the latter being the first of three stellar PPV meetings between the two (being the in-ring highlight of the Smackdown brand in the process – no mean feat when you consider just how great Smackdown was when it came to wrestling action).

Swagger, a guy I’ve had a good feeling for from the second he debuted, and Christian give the ECW Championship some prestige as they both truly fight as if the belt is the most important thing in their career, while the recently face-turned John Morrison and the rejuvenated Shelton Benjamin put on an great display of aerial offence and striking. Judgment Day , four-for-four when it comes to enjoyable action between the ropes, was off to a great start. Another great aspect of these bouts is that they were contested with men considered small for the profession. Only Umaga is considered as a large wrestler (although Swagger is tall, he’s quite lean) and the majority are under 230lbs. It’s also worth taking note that all of these wrestlers are NOT part of the RAW brand, with six of them being on the Smackdown roster at the time.

The red brand finally get on the show with the WWE Championship Match between Randy Orton and Batista. As is the norm, the WWE production team prove why they are the best in the business when it comes to making video packages. The recap of the feud between Dave and Randy is brilliant, taking in their days in Evolution, the time Orton hit the punt and took Batista out for four months and the absolute hammering the champion took at the hands of Batista and a steel chair (not to mention, once again, showing that Big Dave should drop the sit-out part of his finish and just use the standard powerbomb – it looks devastating).

The match itself is decent, with Orton’s mastery of psychology, facial expressions and body language on full show and Batista’s power-based offence coming across as deadly. The finish is brilliant (although done better before) and the after-match shenanigans are entertaining and nostalgic at the same time.

RAW competitors were in the next match too, as John Cena (fresh from being killed at Backlash when he was thrown  into a “7,000 watt” searchlight) , for what seems like the millionth time, took on Big Show. At WrestleMania XX, these two fought over the giant’s United States Championship, since then, it seems, they’ve crossed paths over and over again… and each time, despite Cena landing his finish in almost every one, the story is always the same; can John Cena land the FU (sorry, the Attitude Adjustment) on his larger foe?

Despite the feelings of deja vu, the duelling chants over the love or hate for Cena (who is still the only wrestler I’ve ever seen get aggressively vocal duelling chants just for himself) always give a great atmosphere… it’s just a pity the action is so slow, the 1991 version of Undertaker would be demanding them to get a move on. The main angle coming in is mostly to blame for this (Cena is basically broken physically, so Show just lands a move and then takes a moment to gloat over and over and over and over again).

Unfortunately, John Cena’s character means that any punishment dished out during a match means nothing, as he’ll end up no-selling everything and, despite having his back/neck worked on, will be able to lift up even the heaviest of men. Now, I don’t put any blame on Cena for this (even if others do), because this is how the match has been laid out by the agents, John’s only following orders. It’s a small aspect, but it’s becoming an issue amongst the fans and will eventually cause a major backlash… which, if it leads to a long-overdue heel turn, might actually be worth it.

After opening the show with a good bout, it was left to Smackdown to close the show with a World Heavyweight Championship Match between long-term rivals Edge and Jeff Hardy. For the second time tonight, the WWE production staff go above and beyond in chronicling the feud between the two and their recent history. It also does a stunning job of making Jeff Hardy come across as the greatest thing in the history of the business, which, to the fans in arenas around the world, isn’t too much of a stretch; Jeff, at this time, was easily THE most over wrestler since the glory days of Austin and The Rock.

The main event was always going to be a good match (Jeff v Edge, regardless of the match type or if they have partners or not, is always worth watching), it was just a question of how good it was going to be. The short answer is that the match is an absolute belter. For close to twenty minutes, the action is tense, exciting, frenetic, eyes-through-the-fingers-scary and worthy of closing the show. With recent real-life issues probably keeping Hardy out of the business, it’s a damn shame he most likely will never headline a WrestleMania; at this stage of his career, he both deserved it and would honour that position on the card. Add to that the fact he had shown he could work with a variety of opponents (Kane, Edge, Undertaker, Morrison, Matt Hardy, Umaga, etc, etc) and the prospect was positively mouthwatering.

Only one extra and it’s a 47-second backstage skit between Batista and Ric Flair. It’s alright, but is obviously an afterthought. A match, a behind-the-scenes piece or some interviews (in or out of character) would be better and you can’t help but feel insulted by what’s on offer here.

This was a stunningly good event, with four of the seven bouts coming from the Smackdown side of the fence (something to be lauded when you consider how consistently awesome that show has been for over a year now). ECW only gets one match per event, so that’s not a shock, but RAW being represented by only two is a bit of a shocker.

The commentary teams are, for the most part, on the ball (Jim Ross and “The Grish” are a great duo, Cole & Lawler are dependable and the ECW pairing of Matt Striker and Josh Matthews are hidden gems) and really add to the matches being called.

The skit between Santino and Miz is OK (Marella is usually worth giving a mic to), and the backstage interview with Jericho is another example of a guy who is on fire at the moment, the GM’s office segment with Chavo, Vickie and Show is a little tiresome.

All in all, this is a great pay-per-view and well worth the outlay for owning it. Only the Big Show/Cena match is sub-par, Orton v Batista is decent and the rest are great bouts. The less said about the “extras”, though, the better.