After the success of Mick Foley’s autobiography ‘Have a Nice Day’ the wrestling industry saw the production of a plethora of wrestling autobiographies released including Matt and Jeff Hardy’s entitled ‘Exist 2 Inspire’ in 2003. Chances are you have already heard numerous stories about the Hardy’s personal lives if you’ve been remotely connected to WWE in the last 7 years or so. Their rise in the WWE to the top of the Tag Team Division, their fall and eventual return with flourishing individual careers. 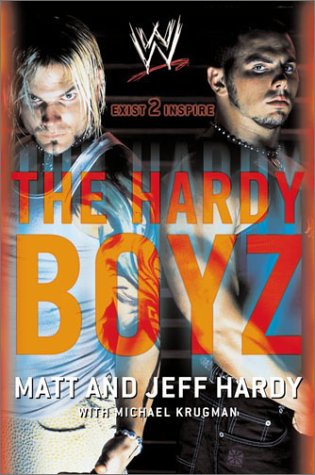 What makes the Hardy’s story so unique is their journey itself. The Hardy’s were accomplished jobbers, owned and ran their own moderately popular wrestling company and got hired by the WWE, all without a lick of professional training. There were no winter death tours like Edge or worldwide training like Chris Jericho they essentially stayed in their own area and taught themselves. One detail I immediately noticed about ‘Exist 2 Inspire’ is that the Hardy’s do not spend their book explaining or talking about their idolization of wrestlers. Rather the Hardy’s acknowledge “Macho Man” Randy Savage as their influence and then the WWE itself is seldom mentioned again until they become jobbers.  Why I note this is because it’s dissimilar from most wrestlers who grew up during the Hulkamania era such as Chris Jericho or Edge who were enamoured with Hulk Hogan. The Hardy’s by contrast hated him once the Mega Powers broke up, which while I’m sure isn’t too unusual is a nice change of pace from other wrestlers from this era.

What I found the most interesting about ‘Exist 2 Inspire’ was the retro appeal; it was written before the Hardy’s were hit with all those personal problems which lead to the two of them being released from WWE. In this book, Edge is still considered a good friend of theirs, Matt still talks about Lita with a gleam in his eyes (figuratively speaking), and Brock Lesnar was still considered the ‘Next Big Thing’.  When you consider where all these superstars are now it becomes quite remarkable. Another point of interest was Jeff’s stance on drugs; he admits to have experimented with them and even explains the benefits for his back. However he takes the stance that he is not interested in them, saying “I’m sure as hell not going to screw up my life by doing a bunch of drugs”. It’s sad because in a few years he changed his outlook and almost ruined his career with them.

The book is easily read, it is almost like a glorified interview. The book chapters are formatted as subjects from their life where one of the brothers gives some information or describes a moment in their life, and then the other brother will give some further information or gives their alternative view on a situation. It’s a format that won’t win any points with critics for the writing but it gets their story told. You don’t have to be a diehard wrestling fan to decipher this one, but the book takes the assumption that you are pretty much on board with the whole wrestling scene so outsiders might not enjoy it as much.

If I had to raise one complaint it would be the fact that they wrote it so young, by the age of 30 you have not lived your life, you still have plenty ahead of you. Admittedly Edge was the same age when he wrote his book, but Edge tells his story in the same amount of pages that these two brothers told both of their stories in.

Overall I’d recommend this to anyone who loves the Hardy’s. If you’ve seen the Twist of Fate DVD or read ‘Adam Copeland on Edge’ you will not be learning anything of shocking interest. But if you’re either looking for a portable version of Twist of Fate or love the Hardy’s then ‘Exist 2 Inspire’ is the book for you. When you consider it’s just a couple of kids who had a dream and followed it through, who couldn’t enjoy that?