For those who were at the shows, this is a great reminder, but if you only watched them on TV, there is no real reason to own this. 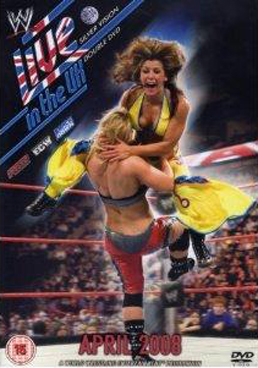 “Seeing as this is simply the RAW, Smackdown and ECW television broadcasts, most of the people reading this review will have already seen them already. The same argument can be made for the PPV releases, but it’s virtually unheard of to release a single episode of the weekly televised wrestling show for the DVD market. Of course, these are no ordinary shows… these are the “Live in the UK” broadcasts.”

The above quote is taken from my review of the last “Live in the UK” release… and it’s still valid for this release too.

RAW is an OK show and nothing more. The match between Regal and Orton is memorable for the General Manager almost breaking Randy’s neck with a stunningly brutal RegalPlex and the out-of-nowhere RKO. Beth v Mickie is good (they’ve had better) and Jericho v Umaga is interesting because it sows the seeds for Y2J’s eventual heel-turn.

The main-event between Triple H and JBL is a bit plodding, but it has a great finish and the show itself closes out on a high point heading into Backlash.

The ECW show is a decent hour (actually 45mins) of wrestling. The eight-man is a good, high-tempo opener, while the Diva Dance Off is visually appealing (seriously, how hot is Layla?), even if it does lead to Tazz dancing like a drunk uncle, but the big landmark moment of the show is that this is the debut of Mike Adamle on commentary.

Mike Knox v Colin Delany is much better than you would expect it to be (it’s a fantastic example of how a squash should be done) and it is nicely set up by Armando Estrada (the match was originally supposed to be Knox v Tommy Dreamer).

The main-event is a fun tag-match that reunites Undertaker and Kane as they take on the WWE Tag Team Champions, Miz & Morrison. A nice surprise is that the champs aren’t jobbed out completely and get in some nice offence on the WWE monsters.

All in all, a nice little show.

The Smackdown show is the best of the three on offer, with Undertaker/Batista being an awesome encounter.

The Highlight Reel is a stunning display of Jericho being a complete ass as he slowly turns into one of the best heels in the company. Having suffered Sweet Chin Music on the previous week’s RAW, it was no surprise he also suffers a Batistabomb this time out.

MVP v Tommy Dreamer is a decent match (with Matt Hardy joining the commentary team of Michael Cole and The Coach – the worst duo in recent memory) that goes around 6mins. Matt Striker (one of the best orators around) v Hornswoggle is a great comedy match and Big Show v Mark Henry isn’t as bad as it could have been either.

Cherry v Victoria and Chavo v Noble are both ok, but everything else on the show is a distant second to the main event as Batista and Undertaker.

A great recap video package of the greatest rivalry of 2007, nay, since the glory days of Austin v McMahon, sets up the Batista/Undertaker main event and really creates an aura of importance and meaning. It’s hard to put into words how great the feud was. Their amazing match at Wrestlemania 23 (Undertaker win), the Last Man Standing rematch (draw) at Backlash,  stunning cage match on Smackdown (draw), the Cyber Sunday bout refereed by Steve Austin (Batista win), their ‘Hell in a Cell’ match at Survivor Series (briefly glimpsed Batista win) and the closing moments of the Smackdown Elimination Chamber at No Way Out 2008 (not shown; Undertaker win) were all excellent bouts and are the reason why this feud is so highly thought of.

Another great aspect is that the feud was so evenly contested. Two wins each and two draws meant that this was one of the most evenly fought rivalries in memory.

This match (preceded by a nice recap of Edge v Undertaker’s MOTY at Wrestlemania XXIV) didn’t disappoint either and was a great footnote to a great war, even if it does end without a clear winner (for the third time in this feud).

The extras are decent, with the WWE tour of Europe simply being the same as the highlight video shown on WWE television. The other two, however, are a nice touch.

Firstly, Sandman is seen to go outside and mingle with the fans waiting at the back of the arena to pose for photos, sign autographs and generally be a nice guy. The last of the extras has Matt Striker go around London and ask various people to give him some British slang. The responses are funny and Matt also seems to have pulled into the bargain.

Still frustrating  is the running time of the three shows. RAW runs for 1h24mins, ECW for 45mins and Smackdown an incredulous 1hr23mins. As with the last release, with RAW being shown as if live, there is no excuse for not showing what happened in the breaks.

The extras are better, but an actual match (which the next release will cover as it has HBK v Crush and Undertaker v Jim Duggan from 1993 and 1991 respectively) would have been nice.

As it stands, this isn’t an essential purchase and is for completists, or those who were there, only.