WWE Cyber Sunday was the annual ‘let’s pretend the fans are making the match ups’ show. In reality, many of the match choices are no brainers, and the tv shows themselves leading up to the event generally try to get the fans to vote for who WWE wants anyway, and more often than not they are successful. 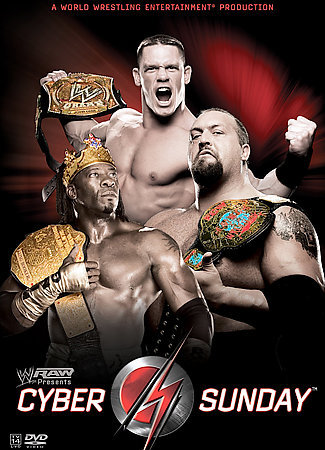 Disc 1 Chapters: 12 chapters. These are entitled:

In the opening match, Umaga defeated Kane clean, with the Samoan spike. This was an okay match, nothing too horrible. Queen Sharmell was shown backstage with Big Show, attempting to persuade him to side with King Booker in the main event. He wasn’t buying it.

The third match of the night saw Jeff Hardy defeat Carlito to retain the I.C. title. This was a fairly entertaining match, ending when Hardy gave Carlito a swanton for the pin.

In the fourth match, Edge & Randy Orton defeated DX. Eric Bischoff was referee. This match wasn’t as good as you’d expect it to be. Orton gave Triple H an RKO on some chairs in the ring for the pin. Bischoff let all the use of weapons during the match slide.

In the fifth match, Lita defeated Mickie James in a divas lumberjack match to win the Womens title in a horrible match.

Ric Flair & Rowdy Roddy Piper won the WWE World Tag Team titles, defeating the Spirit Squad. This match wasn’t very good, but was notable for a few things. Firstly, Piper was picked by the fans to be Flair’s tag team partner, despite them heavily pushing on tv that they wanted Dusty Rhodes to be chosen. Secondly, the choosing of Piper perhaps saved his life, as if he hadn’t have been chosen and spent a brief couple of weeks on the road wrestling again, his Lymphoma Cancer may not have been diagnosed and he’d have been none the wiser and perhaps closer to death. Thirdly, this loss here marked the beginning of the end for the Spirit Squad gimmick.

– Three DVD extras, the first two being around 1 minute in length.

First extra saw Ric Flair & Rowdy Roddy Piper celebrate their tag team title win in the locker room, with the other legends and basically every Diva in the company. Second extra saw Todd Grisham interview Umaga and Armando Alejandro Estrada after his match with Kane. Estrada said that Umaga had the WWE title in his sights. In the third extra, in a match from the following night’s edition of Raw, Ric Flair & Rowdy Roddy Piper successfully defended their newly won tag team titles against Edge & Randy Orton, after DX interfered. Afterwards, DX brought out Big Dick Johnson, who did his stripper dance and taunted Eric Bischoff. This stuff was horrible.

Thumbs down. It was a bad pay-per-view and I’d definitely avoid buying this. There are other good WWE DVDs to be bought before this one.