Rowdy Roddy Piper is the latest WWE legend to be the focus of a three disc DVD tribute set from WWE. This set is definitely one of the more interesting ones, mainly because Piper was such an excellent performer, and also led an interesting life. 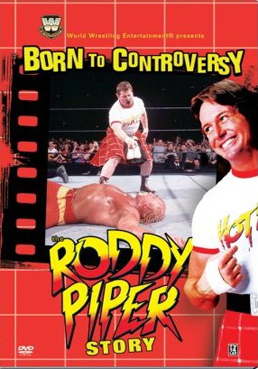 Disc 1 Chapters: 20 chapters. These are entitled:

This set follows the standard tribute format, of disc 1 featuring a documentary on the life of the recipient, and additional discs featuring relevant extras. Probably the most intriguing part of this set is during the documentary part early on, or more accurately, what isn’t documented. First of all, there is the revelation that Piper was born in Saskatoon, in Canada. Not exactly a newsflash, but WWE have spent 20 years telling us he was from ‘Glasgow, Scotland’. Secondly, it very briefly covers his childhood. Very solemnly, he explained how at age 13, he had to leave home, noting ‘it was time to go’. No explanation was given as to why he had to go, why he chose to live on the streets for an indefinite period of time, or how he ended up living in a youth hostel during his early teens. His reluctance to talk about this time period of his life spoke volumes. It was explained how he faced Larry Hennig (Mr Perfect Curt Hennig’s father) in his first professional match, and how he got his local bagpipe band to play him to the ring, with the ring announcer giving him the ring name, ‘Rowdy’ Roddy Piper as a result.

His early feuds with the Guerrero family, notable Chavo Sr., were documented, as was his first success, wrestling in the Portland wrestling territory for Don Owen. His progression into the Mid-Atlantic territory was covered, with lots of footage of him wrestling a young Ric Flair. This segued into the story of his famous Dog Collar match with Greg Valentine at the first Starrcade in 1983, and basically led into his debut with the WWF in 1984. The whole story of the Rock ‘n’ Wrestling Connection feud, with Cyndi Lauper and Hulk Hogan was covered in detail, with lots of great clips of angles and promos airing, in the run up to Wrestlemania 1. His feud with Mr T was covered, with Piper explaining how he didn’t really like T much in real life. His first departure from the WWF in 1987, culminating with his match with Adrian Adonis at Wrestlemania 3 was also featured in detail. What was interesting was that they never talked about Vince McMahon’s real, original opinion of Piper. Vince thought Piper was too small to be a credible opponent for Hogan, which is why he was initially deployed as Paul Orndorff’s manager, and was the main reason why he was given the Piper’s Pit interview segment – because he was a charismatic talker, but was too small to be a wrestler that drew money.

There was a nice feature on Piper’s acting career, in particular his role in cult sci-fi movie, ‘They Live’, with writer John Carpenter being interviewed. They detailed his comeback at Wrestlemania 5 in a horrible interview segment with Brother Love and the late Morton Downey Jr., as well as his highly controversial ‘racial’ feud with Bad News Brown, where Piper ‘blacked up’ for his match with Brown at Wrestlemania 6, in order to mock him. They quickly ran through his announcing career, as well as his excellent Wrestlemania 8 match with Bret Hart (arguably the best match of Piper’s career). He basically admitted that his feud with Jerry Lawler in 1994 sucked, explaining that he had no chemistry with him, and also spoke about his 1996 feud with Goldust. He explained his signing with WCW in 1996 as being strictly a financial thing, and again, basically blew off his tenure there, unsurprisingly. His return at Wrestlemania 19 was covered, as was his controversial HBO interview and subsequent firing. The documentary ended on a happier note, with Piper returning to WWE in 2005 to be inducted into the Hall of Fame, and his appearances at Wrestlemania 21 with Stone Cold Steve Austin and at the Raw Homecoming show in October 2005 wrapped up the documentary.

Comments on the DVD features

An absolute ton of extras on this disc, split into three categories, ‘Piper Stories’, ‘Raw Homecoming’, and ‘Matches’.
‘Piper Stories’ features various comments from Piper himself, as well as Bruce Pritchard and Kentucky DJ Bill Cunnigham, recounting some Piper related tales. There was a nice video feature on Colt Piper, Roddy’s son, who made numerous appearances as an 8 year old on WCW Monday Nitro back in 1997, during Piper’s feud with Hogan. Present day clips and comments with a now nearly 18 year old Colt aired, recounting the experience. This was pretty cool to watch. The section entitled ‘Raw Homecoming’ is basically one extra, featuring Randy Orton putting over his great Piper is and how his legendary status is much deserved. The ‘Matches’ section only features four matches, all from earlier in Piper’s career. Two Portland wrestling matches (both watchable), a Mid-Atlantic match (entertaining) and his Starrcade match with Valentine (excellent match) are included.

This disc features 13 of Piper’s best career matches, mostly from his WWF career. The major matches of his career are all here, including all of his Wrestlemania matches, as well as his rare ‘War to Settle the Score’ match with Hogan that first aired live on MTV back in February 1985. This is all excellent stuff. There are also three classic Saturday Nights Main Event matches vs Paul Orndorff, Iron Sheik and Bob Orton. This section closes with Piper’s WCW Starrcade ‘96 match with Hogan.

This disc features 24 of Piper’s best ‘Piper’s Pit’ interview segments, and is extremely entertaining to watch. There are the classic segments with Jimmy Snuka, where he breaks a coconut over Snuka’s head; the segment where he belittles and beats up jobber Frank Williams, and the segment where he terrorised Jimmy Hart, and got some revenge for Adrian Adonis’ attack on him previously. But there are other great segments too, such as the Piper’s Pit featuring Hulk Hogan and Andre the Giant, which set up their match for Wrestlemania 3. The clips from pre-1988 are clearly Piper in his prime. Strangely, they have included segments from his disastrous 2003 heel run, where he was made fun of by Vince McMahon, and where he interviewed the likes of Mr America (Hulk Hogan under a mask, in a stupid, shortlived gimmick), Rikishi and Jimmy Snuka. You could tell Piper himself would like to forget about this time period (he kind of rolls his eyes recalling the Mr America and Rikishi stuff in the extras on disc 1), so it was surprising to see this stuff included. For example, I could have done without seeing the Great Khali, of all people, beating up Roddy Piper. I have no idea why that was included. I realise the producers of this set were trying to be thorough, and I commend them for that, and I can hardly say there should have been less extras on this disc, given my thoughts on the subject of DVD extras in the past, but I do feel they could have been slightly more conservative in what they chose, particularly in their post-2001 footage.

This is an excellent DVD set. If you’re a fan of charismatic promos and interview segments, hard-hitting and sometimes humorous angles, then this set is definitely for you. If you buy this expecting 5 star wrestling matches, this isn’t the set to buy, as Piper was never that guy. However, as a legend, Piper is definitely one of the more entertaining, interesting and intriguing wrestling characters ever, with a quick wit that is up there with the likes of Bobby Heenan, and I think even the biggest of Piper critics would struggle not to enjoy at least parts of this DVD.