Brian Pillman led an amazing life, and this two-disc WWE DVD set pays fitting tribute to the man and his career. 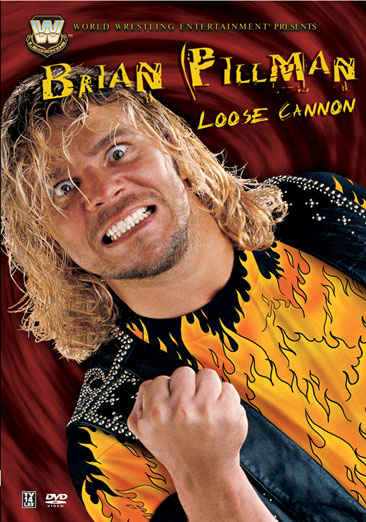 Disc 1 Chapters: 17 chapters. These are entitled:

Disc 2 Chapters: 13 chapters. These are entitled:

Disc 1 features the obligatory documentary on the life and times of Brian Pillman, and I have to say, this is arguably the best documentary of its type that WWE has ever produced. It begins by documenting how he overcame the odds as a child, enduring over 40 throat operations in order to remove Polyps from his vocal cords. Such surgeries are what left him with his trademark raspy voice. He played hockey as a kid in Cincinnati, before switching to football in high school. He was dedicated to bodybuilding as well during his teenage years, although his efforts were somewhat in vain, as he still remained small in stature compared to his ‘jock’ teammates. He overcame the odds and played in the NFL for both the Cincinnati Bengals and Buffalo Bills, before being cut. He then moved to Canada and played for the Calgary Stampeders in the Canadian Football League. During his time in Calgary, he was pointed in the direction of Stu Hart’s Stampede Wrestling promotion. He was advised by his good friend and mentor, Kim Wood, that his agility would be perfect for wrestling. He trained in the famous Hart Dungeon and fast became one of its best graduates, teaming with Bruce Hart to form the Bad Company tag team in the Stampede Wrestling promotion.

He was soon spotted by the NWA and was signed to a contract. Making his debut in the summer of 1989, he wowed fans with his incredible flying ability and movie star good looks, and was soon given the moniker, ‘Flyin’ Brian’. He because one of the NWA’s fastest-rising and most popular stars, teaming with Tom Zenk to form a tag team that won the U.S. tag team titles. He was later plugged into the WCW Light Heavyweight title division and became the first champion, defeating Richard Morton in a tournament final. One of the highlights of his early WCW career was a series of matches he had with Jushin ‘Thunder’ Liger, to whom he dropped the title to, and the regained the title from, in a classic match at the SuperBrawl II PPV in February 1992. Later in the year, his career took another twist, when he turned heel and formed a tag team with Stunning Steve Austin, billed as the ‘Hollywood Blondes’. The duo got over immediately, as the chemistry between the two wrestlers was very strong, and the pair engaged in many humorous skits and segments mocking Ric Flair and Arn Anderson. Soon after the blow off match between the Blondes and Flair & Anderson, the tag team was inexplicably split up. Unfortunately for Pillman, he was turned back face and was in limbo for the following two years, participating in meaningless lower mid-card matches. Finally, in the fall of 1995, Pillman was given a new role – a heel member of the reformed Four Horseman. With this new focus came a re-jigged gimmick, all from Pillman’s own mind – the ‘Loose Cannon’, a guy who would say and do anything, at any time, for shock TV.

His feud with booker Kevin Sullivan fooled the wrestling world, both off and on-screen, and led to him getting a storyline release so realistic, that he actually talked Eric Bischoff into giving him a legitimate release in order to continue the façade to the outside world. Pillman exploited this situation to his own ends and negotiated the best possible deal for himself, eventually signing for the WWF. This was not before being involved in a car accident that would change his life forever. He broke his ankle badly in car wreck, in April 1996. He continued to appear on WWF TV throughout the summer and fall, but the increased schedule of appearing at WWF TV tapings, working on a recovering ankle, necessitated him having a further surgery on his ankle. In order to write him out of the storylines whilst he recovered from this surgery, it led to an infamous angle involved Stone Cold Steve Austin, where Pillman threatened Austin with a gun on live TV. He returned to the ring in the spring of 1997 and teamed with the heel Hart Foundation in matches against the likes of Austin and Goldust. His final feud came in the fall of 1997, when he was involved in a feud with Goldust and Marlena. Pillman was wrestling a full schedule at this point and it was truly taking its toll on his body. He became addicted to painkillers, but refused any help or offers of rehab. Tragically, he died of a heart condition on October 5th, 1997, hours before he was due to face Goldust in a pay-per-view match at WWF Bad Blood.

Comments on the DVD features

The first eight extras are comprised of unused ‘talking head’ clips from various former wrestling colleagues of Brian, recounting their memories of the man. My favourite had to be Jim Ross meeting Pillman at the height of his Loose Cannon craziness, in early 1996 at the NAPTE TV convention. Ross remembers how Pillman strolled up to Vince McMahon (who he had never met before) and gave him a huge embrace, before raving about meeting the almighty Vince McMahon. He then walked up to Ross, gave him the same hug, but at the same time, whispered in Ross’ ear, ‘It’s all a work, it’s all an act’. Apart from a couple of other people within Pillman’s inner circle of friends and family, Ross may well have been the only person Pillman revealed the secret to, at that time. The other extras on the DVD consisted of an early Bad Company interview in Stampede Wrestling, a great skit from WCW Saturday Night mocking Flair and Anderson, a 1995 WCW vignette where Pillman is portrayed as a total babyface, and a couple of WWF vignettes, featuring his taunting of Goldust and Marlena (these were really creepy and well done), and the infamous gun angle involving Stone Cold Steve Austin. There are also three matches, a Bad Company tag team match from 1988 (watchable), a Brian Pillman vs Lex Luger match from Halloween Havoc 1989 (one of Luger’s best matches of his career, thanks to Pillman carrying him), and Pillman and Zenk defeating the Freebirds for the U.S. Tag Team titles in a very entertaining 1990 NWA match.

This disc features 13 of Pillman’s best career matches and many of these are excellent. The famous War Games’91 cage match where Pillman is powerbombed by Sid Vicious and Pillman’s head hits the ceiling roof of the cage; his famous matches with Jushin ‘Thunder’ Liger, both at the SuperBrawl II PPV in 1992, and as part of the first ever match on WCW Monday Nitro in 1995; as part of the Hollywood Blondes in a cage match vs Ricky Steamboat & Shane Douglas from 1993, and his matches with Dean Malenko and Eddie Guerrero in early 1996, the latter featuring the hilarious sight of Bobby Heenan losing it and uttering the F-word live on air, due to Pillman grabbing him by his surgically repaired neck in an unplanned spot outside the ring, behind the announcers’ ringside desk. Also included is the great ten man tag team match from the famous WWF Calgary Stampede 1997 pay-per-view, where Pillman was cheered as a huge babyface, despite being a heel at the time, as were the rest of the Hart Foundation in a classic match against Austin, Ken Shamrock, Goldust and the Legion of Doom.

This is a tremendous DVD set. The documentary is both informative, entertaining, rather tragic and always compelling. The comments from the talking heads are all very candid and not at all staged-looking. The matches included are all perfect examples of how great Pillman was in the ring and how he evolved over the course of his career. I wholeheartedly recommend this release and in my opinion, this is probably my favourite WWE DVD release of 2006.