WWE Unforgiven 2006 was a very good pay-per-view show, featuring an excellent main event. Held in front of a sold out crowd in Toronto, Canada, the show featured a TLC match, a Hell In A Cell match, and the final match of Trish Stratus’ six year wrestling career. It was a satisfying event that tied up many loose ends and proved to be the blow off for a couple of feuds. 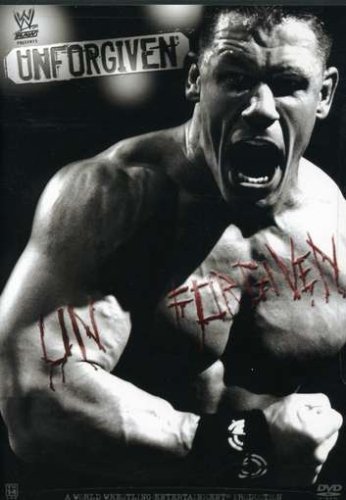 The DVD version of the show opened with Johnny Nitro vs Jeff Hardy for the IC title. This was an entertaining opener, between two young guys on the rise, particularly Nitro, who seems to be improving with each passing month. Second match couldn’t be more different and was arguably the worst match on the DVD. Kane vs Umaga featured a poor double count out finish to the match, as they were building to a ‘Loser Leaves Raw’ match between the two to take place on Raw. Why that match stipulation wasn’t used on a pay-per-view is beyond me. Third match saw the Spirit Squad, in one of their last serious tag team title defences, against the Highlanders. Rumours abounded at the time that the Squad were about to split up, and every one thought that the Highlanders would win the titles here. That didn’t prove to be the case though. This was a decent match, although no better than anything that usually airs on WWE Raw.

Fourth match was one of the highlights of the DVD, the two-on-three Hell In A Cell match, between DX and the McMahons & Big Show. This was quite the violent match, and Vince McMahon bled a lot. In fact all the participants bled at some point during the match. Lots of weapons used too, including garbage cans and chairs. This was the final match of the DX vs McMahons feud, and the ending of the match was quite the unique visual. I wasn’t a huge fan of this feud, but this was an entertaining match. The next match was placed in the death position, following the Cell match, but actually did the impossible and kept the crowd heated and interested. This was Trish Stratus’ final match in WWE, as her contract had expired and she was leaving the company. In her final match she defeated Lita for the WWE Womens’ Title in a very good match. This was a satisfying, storybook-ending to Stratus career, and she was noticeably choked up whilst celebrating after the match and receiving the fans’ rapturous cheers. Penultimate match of the night was Carlito vs Randy Orton. This was a decent match too, a slight step above the type of match usually on WWE Raw. The timing of the finish was great, with Carlito attempting a flying manoeuvre and Orton catching him and RKO-ing him simultaneously. The final match of the show was the Tables, Ladders and Chairs (TLC) match for the WWE Championship, pitting champion Edge against challenger John Cena. This was a fantastic match, and credit to Cena, as this was his first time ever in such a match too, and he did great. They used huge ladders in an attempt to retrieve the title belt hung from the ceiling of the arena, and also used lots of tables and chairs too, as you would imagine in such a match. There is one spot in the match where Edge jumps off one ladder and spears Cena off his ladder that has to be seen to be believed. It was a great effort by both wrestlers and a very satisfying end to the show.

The first extra is billed as ‘Unedited footage of DX’. Hold that excitement right there. What it actually is, is an extended version of the August 21st, 2006 skit from WWE Raw, when DX spray painted the initials ‘DX’ on both Vince McMahon’s private plane, and also on the exterior of the WWE headquarters in Stamford, Connecticut. Basically it is what you saw on tv, plus DX relaxing inside the plane and eating food. Also, it shows DX entering WWE Headquarters and bribing a security guard with donuts. I didn’t find any of this particularly funny, although I’m not really a DX fan anyway, so maybe it was just me.

The second extra, billed as a ‘Trish Stratus Farewell Interview’ is actually 90 seconds of Trish Stratus walking back to the locker room after her match at Unforgiven. An emotional Stratus, with heavily smudged mascara around her eyes after legitimately crying, makes a few comments thanking the fans for all their support over the years. It’s a nice little extra, but billing it as an ‘interview’ is a bit misleading. Technically, it is Trish Stratus final on-screen appearance for WWE, as a DVD-exclusive extra, as this was never shown on tv.

The third and fourth extras are simply lifted from the September 11th, 2006 edition of WWE Raw. Triple H’s match with Vince McMahon (a very short match) is shown in its entirety, and before that, as DX make their way to the ring, they are jumped backstage by a variety of heels, including Lance Cade and Trevor Murdoch.

I’d give this DVD a thumbs up and my recommendation, as it is very good pay-per-view and a definite improvement on Summerslam 2006. The DVD extras are once again kind of worthless. Still, this was one of WWE’s best pay-per-views of the year, with several satisfying conclusions to matches and feuds.