The word definitive is bandied around a great deal at this time of year. On Christmas Day I’m sure many excitedly unwrapped their gifts, eagerly awaiting their copy of a definitive Cliff Richard collection after just finishing listening to Slade on their definitive Christmas hits collection. But when a title such as Total Extreme Wrestling rears its head for another outing, it would not be out of place to utilise the word again. Admittedly it is in a field of it’s own, but to knock Grey Dog Software’s efforts because of a lack of a rival in the same mould is sheer laziness from the uninitiated.

With people happily dancing around their front room, waving a remote to make a blond haired man with no limbs fling a cow chained to his wrist with no shame, there is no cause to be so nitpicky about a text based wrestling simulator. To the untrained eye TEW ’07 enters the fold along the same lines as the previous title ’05, and while this could lead many to dismiss the title on account of not giving ’05 a real look, it is wrong to completely ignore the effort that has gone into improving an already great ground base. Depth is the buzzword from the get go. It is immense, and even that is understating what has been achieved this time around from Mr Ryland and his team. Already impressing this year with a sequel to their other prime franchise Wrestling Spirit, the success has been continued into TEW ’07 with it tweaked to almost the very maximum level possible, and with the pre-release editor already out, many are already tinkering with possible mods to extent the title even further. TEW ’07 is definitely going to be around for the long haul.

For those venturing into the world of video game wrestling promoting, a brief tale of what is in store within TEW ’07 is a given. In the title the player takes up the role of a wrestling promoter, set with the challenge of taking their chosen promotion to the top of the wrestling tree. Dealing with the bug bares of television, their companies roster, and the challenge from rival federation make up the majority of the game play entailed here. It is an effortless comparison to make but TEW is essentially the Football Manager benchmark title of the Wrestling genre. In layman’s terms it is essentially everything that the General Manager Mode of the SD Vs Raw series strives to be, rammed with more features and the depth the spin off mode of the console title can only aspire to. So if you are new to the series and you are intrigued by what Yuke’s have been trying with the General Manager Mode, then you are heartedly recommended to gander over TEW ’07. 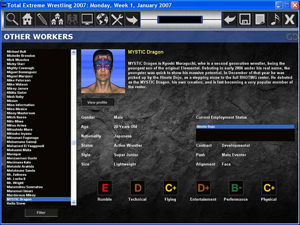 The great thing about Text Based Titles is that they do not need to rely on a swanky new Graphics overhaul to grip the player, instead focusing wholeheartedly on the game play. Game play is forever harked around in the gaming world is all-important and quite rightly, so it’s always a good job when the developers get this bang on the money. So a pat on the back for Grey Dog as they have maintained the playability of their last outing ’05. But this is not to knock what Grey Dog has achieved on the graphical front in TEW ’07. Every wrestler on the roster has their own computer-generated mug shot, which are lovely to behold, and the menu’s are simple, are intuitive to wade through with their clever use of a tab system at the top of the window to aid navigation. The soundtrack is also very good, and is never grating. Nice presentation all round achieved by the team.

Continuing from ’05, TEW ’07 has a fictitious world. For those who have been enjoying Wre Spi will notice the familiar faces but for those not caught up in the ‘Cornellverse’, Grey Dog have created a great central hub, crammed with so much detail the player almost feels an active part of it. The title offers 29 different promotions from around the globe, each with their own history and status. It just again emphasises the immense depth of this title, as it leads the player to strive to discover the back-story of their promotion as they take the helm and endeavour to reach the pinnacle of the industry. Rosters have been generated by the Grey Dog for each company within the game, and title histories and feuds have been created aiding the player when seeking out whom to base their new playground around. Continuing from their last titles Grey Dog have again included the option to manipulate the games roster with the File Editor. Grey Dog have kindly included the ability to convert custom rosters from TEW ‘05 if the player feels that way inclined, very festive and more importantly very handy if you’ve got a handy roster on the go on the last edition before your jump into pastures new. If all this self-creation, and fictitious world of wrestling fun isn’t floating your boat then there is also a solution for you too, with many real world mods are bandied around the Internet for download if one looks in the right places. Just as avid fans continue to update EWR, many WWE/TNA inspired creations will be streaming across the World Wide Web soon. So essentially there is no reason to dismiss the title on the basis of it not containing the likes of Shark Boy, and Funaki, as you have these many options to create whichever scenario suits your taste. 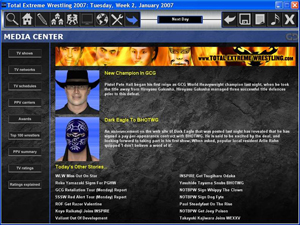 Two modes of play present themselves within TEW ’07; Free Style where by no goals are set and the player is given the freedom of taking the role of owner if they wish, only being fired for poor performance; and Straight Edge in which the owner of the company sets goals to be met and achieved to avoid being handed the pink slip, and this mode doesn’t allow the player to become the owner of a company unless they set sail on their own with a custom federation. Straight Edge is really how the title is intended to be player, with the game slowly opening itself up for more manipulation and self-input as the player works their way through. Control is offered to change the way in which the company is targeted, whether you wish to take a hardcore route if that way inclined. Before all this is accessed though the player has to create his or her own identity within the world, offering a great deal of customisation allowing the player to either place themselves as a tired out wrestling stalwart or a star at the head of the industry taking upon the promoting role.

When first undertaking a company, the player must identify themselves with the building blocks they have to work with. Handily TEW uses a grading setting, this time taking the form of letters rather than the numeric approach of the last outing, and the title greatly benefits from the change making play easier. Ratings are provided for each skill the wrestler possesses, from their microphone ability to star quality, allowing the player to easily identify the stars and the dud’s and help to establish whom to place against each other. Every player has a nice graphical marker and a back-story, giving them purpose within the TEW world, and most importantly their own style which is key to the game. A wrestlers style must be noted and adhered to correctly as putting together players with the correct corresponding styles that work well together achieves greater success and helps to aid the rise to the top of the tree. And of course putting together wrestlers means establishing feuds and using storylines, with the greater feuds and storylines reaping the greater benefits.

The company’s mantra must be adhered to when choosing which way to head down, as the company’s fan base is attracted to different things with some preferring strict in ring related affairs where as others like flashy angles to spice up the ongoing battles. It takes a tad to grasp unless you are a veteran of the series, and the wealth of options can seem daunting, but once you have the knack of putting together wrestlers of the right style to co-exist real joy can be had from the successful outcome reaped. It is all accessed by the booking screen, which is conveniently situated in a tab format at the top of the window alike the rest of the options, and options from changing the creative aspects of a roster member’s character to asking the Booking team their tips and advice can all be accessed. The wealth of creativity provided just from changing a roster member’s stance from heel to face, to creating a new title belt to add extra spice to the show is captivating. 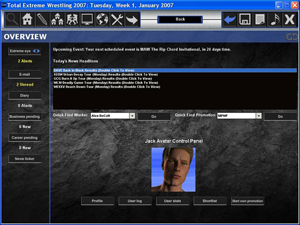 Booking matches is again easy and intuitive, and offering enough variety to get the creative juices flowing. Road Agents play an active role, as you can tell them how you wish the match to be played out adding a layer of realism, helping to protect less talented workers and keep ego’s in check by the options which you choose. Matches range from one on one affairs to more complex and exciting offerings from the world of wrestling. The fans again react to different matches in different companies, so this must be taken into account when booking, but there is also the added depth of fatigue and injury from the more dangerous matches meaning you have to limit their use.

Overall, TEW ’07 has taken it’s ground base and strived to hone it to achieve it’s mantra I handed it earlier of being the definitive simulation wrestling title, and I feel Grey Dog has succeeded in this. The sheer wealth of options available to the player, the way the title is hugely customisable to suit every nuance of the player and the great depth of the ‘Cornellverse’; all couple to present a thoroughly compelling experience. The learning curve can be steep particularly for those new to the world of the Text Based Wrestling Simulators ™, but once you throw your hat into the ring and let yourself free with all that is available here the potential to really reap what this game truly has to offer; the hidden depths discovered through searching every nook and cranny, there is so much to be entertained and thrilled by. The more time you invest in the title, the more that you will reap from it, and because of this it will keep drawing you back for more as you experience new thrills never seem when you promoted the little company in Kentucky with Red Dragon as your star. TEW ‘07’s world is there for you to tinker with, and once you venture it you won’t be leaving it anytime soon. Well until you download your Nitro 2000 mod.