Can the WWE follow up the Controversy Creates Cash, Eric Bischoff’s tell-all autobiography with another winner?

The Finishing Moves of Sports Entertainment Superstars
By Michael McAvennie 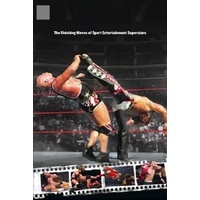 It all depends on your point of view; the premise of this book is simple – it does exactly what it says on the cover – it’s the finishing moves of WWE superstars past and present. Each move is covered by a full colour double-page spread photograph, with a piece of text overlaid to name the superstar, and the move.

Feasting on worms and tasting victory, the Boogeyman terrorizes Nunzio with a frightening pumphandle slam!

This is a fairly typical example; the entire book is presented in kayfabe, and as such, I would say that the veteran, seasoned WWE watchers that have an inkling of the inner workings will probably find nothing of interest here, other than perhaps the ultimate in geeky coffee table books.

However, the pictures are all of high quality – some have never been seen, says the blurb on the back of the book; the text is big, bold and colourful – easy to read for the younger WWE fan – and for me, that’s this book’s target audience. This would make an ideal Christmas gift for any WWE loving kid out there.

Even Hulk Hogan was hard pressed to withstand the disastrous impact of a 450-pound Earthquake Splash!

The inclusion of some old school legends such as Hulk Hogan, Roddy Piper, Andre The Giant, Bret Hart and Jake Roberts to name but a few might even spark some interest and encourage them to investigate some of the big names of the past, and at the end of the day, that can’t be a bad thing.

As I said above, if you’re a long time fan, there’s not much here beyond maybe some nostalgia for some stars of the past, but children will love this. Take a look before you buy. Selling for just around the £7 mark, it could be an ideal stocking filler for that WWE obsessed small person in your life.