The latest in WWE DVD releases is the Smackdown brand’s PPV event from July this year, namely ‘Great American Bash’. The shorter, less-detailed version of this review is that this DVD is one to avoid, as the pay-per-view event was BAD. But hey, if you’re sticking around, let me tell you in more detail why it sucked. 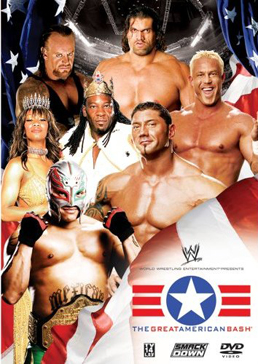 This event occurred right around the time that the ‘WWE Wellness’ drug testing policy results came out. Unfortunately for Smackdown, quite a few of their roster members either failed the test, or the test results brought up major health concerns regarding several prominent roster members, necessitating them being pulled from the card at the very last minute. As a result, Bobby Lashley vs Fit Finlay, The Undertaker vs Great Khali, Super Crazy vs Gregory Helms, and Batista vs Mark Henry – four matches all originally planned for this show – were pulled at the last minute, with Lashley, Khali, Crazy and Henry being replaced by William Regal, Big Show, Matt Hardy and Mr Kennedy respectively.

This backstage chaos surrounding the show, combined with a lacklustre presentation in front of the cameras on the show itself, made for a poor pay-per-view. Strangely, the show opened with a good tag team match, with Brian Kendrick & Paul London successfully defending the WWE Tag Team titles against the Pit Bulls. It was easily the best match on the show. The second match (and the way it was presented) was not so good. Teddy Long came out and announced that Bobby Lashley would not be wrestling on the show as he had ‘elevated liver enzymes’. Long here was telling the truth. What he didn’t mention was that this condition had been diagnosed in real life, garnered from the latest round of drug tests. Lashley then inexplicably came out in his ring gear, looking like there was nothing wrong with him. To the uneducated fan, this must have seemed like they were getting cheated out of one of the matches they had paid to see. Once Lashley had returned to the back, Finlay and his friend at this point, William Regal, had a match against each other for the U.S. Title. Nobody knew who to cheer or boo, and although somewhat technically sound, the match just didn’t work. Next up was another rearranged match: Gregory Helms facing Matt Hardy. Similar to the first match, this was a good match, but not good enough to save the show, or worth going out of your way to see.

Next match was an absolute calamity. It was scheduled to be Undertaker vs Great Khali in a Punjabi Prison match; basically a variation of a cage match, but with a huge cage made out of bamboo sticks. There were two bamboo cages, one which surrounded the ring, and another around the outside of it, surrounding the ringside area. In needlessly complicated rules, the idea was that both men started in the ring, and the first man to escape both cages wins. Prior to the match, Big Show and Khali attacked Undertaker backstage, prompting Teddy Long to order ECW’s Big Show to face Undertaker in the match, instead of Khali. Um, okay. I suppose Long couldn’t tell the truth here, and mention that Khali wasn’t allowed to wrestle due to ‘elevated liver enzymes’ as well. But they still could have come up with a better excuse. Anyway, Taker vs Big Show was horrible, as expected. If you want to see one of the worst WWE gimmick matches of the last five to ten years, this is one of them. It’s doubtful we’ll ever see a Punjabi Prison match ever again. This debacle was followed by a four way bra & panties match, involving four divas – none of which were over – stinking up the place in another bad match.

The show’s semi final match was Batista vs Mr. Kennedy. After a mammoth eight minutes of mediocre action, this match ended in a D.Q. At least the post-match attack by Batista on Kennedy was entertaining, with Kennedy needed multiple stitches after being busted wide open. Main event of the show saw King Booker win the World title, defeating Rey Mysterio. This was a decent, if unspectacular match, which featured interference from Chavo Guerrero, who turned heel by attacking Mysterio and costing him the title.

The first extra featured content lifted entirely from the July 28th, 2006 episode of WWE Friday Night Smackdown, namely new WWE World Champion, King Booker’s elaborate ring entrance in a carriage, celebratory first interview as new champ, followed by his first title defence versus Mysterio in a re-match from the previous night. Entertaining angle and match action. The second extra is that fast-becoming rarity – a DVD exclusive. Filmed in the locker room after the Punjabi Prison match, Paul Heyman gave a bloody Big Show a pep talk, declaring how proud he was of his efforts.

One of the weakest WWE DVD releases of the year. Avoid like the plague.