Unless you have lived in an underground bunker with no Internet access or contact with the real world, you will not have failed to hear about the good work achieved by Adam Ryland and his cohorts at Grey Dog software. Famous for their EWR and TEW titles, Grey Dog has honed the Text-based wrestling simulation genre and even despite having relatively no competition it hasn’t blighted all that they have accomplished, creating their own niche in the market and remaining there for a good while. They have earned their kudos quite rightly, but there is only so far one can take the idea of booking a wrestling promotion until they seek something new. Grey Dog were already ahead of us, and last year released a new take on the text-based wrestling simulation genre in the form of Wrestling Spirit. Rather than booking matches, the game focused instead on taking hold of the career of a Professional wrestler themselves, with the toils and benefits the life brings. Wishing to take the niche further, here arrives the sequel; but will it succeed in providing an alternative reality for the gamer in the boots of a wrestler, or just prove to be EWR with a fancy outfit. 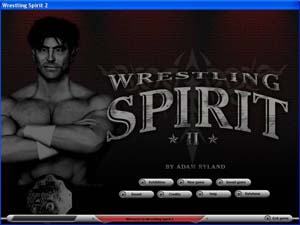 Wre Spi 2 arrives to the fold with five game modes: Superstar Challenge, Rookie To Legend, Pro League, World League and the straight to the action Exhibition Mode. In the Superstar Challenge mode, the player undertakes the role of a current wrestler in the game and set with the role of handling his career and taking him to the top of the tree. The Rookie To Legend mode (which I feel is much more interesting), sets the player the challenge of taking an upstart from the under card and help to work the rookies way up the ladder. The World League offers the challenge of becoming the best wrestler in the world, as the player is set the task of rising to the top of the five national leagues in order to become the undisputed world champion. Lastly there is the Pro League, which again offers a different task, in that it is the one league where by all of the top stars are included in the battle to become the champion, your obvious challenge being to beat your cohorts to the finish line first.

The depth of the title is as incredible as Grey Dog’s back catalogue of wrestling titles. While the roster and companies within Wre Spi 2 are entirely self generated by Grey Dog, the time and care given to each aspect has greatly helped to make this only a minor annoyance to those deeply wishing to play with their heroes from the US Scene. Every wrestler included in the title has been given their own attributes and personality, but more importantly a back-story situated in the form of their profile, which gives reason to care about how your wrestle fairs in their prospective career. A vast range of moves have been made available, and can be tinkered to the players every whim. Many see the name text based, and immediately imagine a stereotypical nerd wearing his sellotaped glasses tapping away on his laptop, while simultaneously chatting online to his friends about the latest Warcraft add on. While in the case of me this stereotype is true, to envision this game as a experience just for the afore mentioned ‘nerd’ generation is too quickly judging the Wre Spi 2’s book by it’s cover. The title offers so much to the casual gamer as to those whom will be deeply convulsed with its depth. While the game does offer complete customisation to the player, at the same time Wre Spi 2 offers enough depth in its already created roster to allow those who wish to head straight into the action, rather then spend time tinkering away. Coupled with the ease of difficulty curve; with the game offering the player the option of having a wrestler that will easily reach their potential, or a tougher and more realistic option of having your chosen wrestler only possibly reaching their potential; presents the game both as an option for those looking for an in-depth, soul possessing experience and to those wishing for quick whirl and rise to the top of the industry.

Each mode, barring Exhibition, undertakes the same level of control of your chosen character (whether self generated, or chosen from the pre-created roster). The player controls all aspects of their wrestlers life and livelihood, from financial matters to their relationships with other workers on their employee’s roster. You handle your chosen athletes’ contract and future, and in doing so present ideas to front office in order to give a spur to your current run and give you that niche to rise up the card; which is particularly important in the Rookie to Legend mode where you will find yourself situated at the bottom of the bill for a while until you earn your stripes to start your progress up the ladder. Starting relationships with your current roster members adds another dynamic to the fold, offering opportunities to date your female co-workers or build up a strong friendship with a legendary figure on the card. The relationships are built through winning a game of cards against your chosen prospective friend, with money gambled in your attempt to win them over. It makes a fresh alternative to the other aspects of game play within the game, and I found myself getting hooked on this for a while over the actual in ring match experience.

Wre Spi 2 of course rests all of its laurels on the actual in ring experience, and as it is a text-based title it tackles this in an interesting but familiar way. Taking a nod from role playing titles, the action is dictated by deciding which move to undertake from a scroll down option menu in reaction to the chosen move of your opponent, reacting to their previous action, which culminates in the winner of the bout. But there are other factors that are thrown into the mixing pot, which will affect how well your wrestler succeeds. The player is offered the chance to create their own move set for each different style of bout they are booked in, whether it is a Traditional purist bout, or a US family crowd, and this factors into how your star will be taken by the crowd and how effective their performance will be. The energy level and spirit play their part, with certain moves restricted to how high your current energy level is and taunts and other aspects of the bout restricted to your spirit level and confidence. 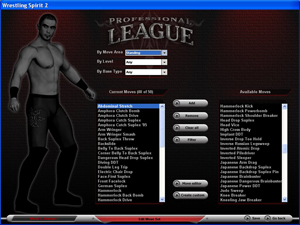 The player maps out every move in each bout, whether it deciding to take your wrestler out of the ring to grab a chair, or throwing the opponent into the turnbuckle. But this is where a problem rears its head, as the title can get quite pedantic in its requests for the player to continually set up their opponent for a move before being allowed to take action. While this makes sense for table spots for example, it can start to get tedious when one has to lift up their opponent from the canvas and then in a separate move perform their DDT. Streamlining these actions together would fast track the action and allows the player to focus in on hitting their prime spots. Yes it would take away from the experience of controlling every single aspect of the in ring action, and ease the strategy element, but I feel a simple tagging together of the move being performing and lifting the opponent from the canvas together, would ease what easily becomes tedium in a prolonged bout. Picking each action individually also make it an ickle too difficult to string together a flow of moves, but I feel this also has its benefit as it prevents the player from completely dominating a bout from the get-go and forces the player to interact with their opponent by allowing them also to get in their moves rather then every match becoming a one-sided affair. This strategy element is handled to great effect, with the player having to plan ahead to the next move just as a real wrestler would have to envision their actions before hand, and before long the player develops a affiliation with chosen wrestler, consciously knowing their strengths and weaknesses and how to overcome them to win the bout. 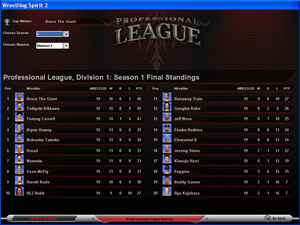 Grey Dog built a great base to expand upon in the original Wre Spi, and build from it they have. Being nitpicky I would have liked some sound in some capacity, and it being absent does take away from the experience as, as engrossing as the descriptions of the action are and the handsomely designed graphics that accompany them, the sound of the crowd getting pumped or jeering your in ring bout I feel would make the experience that more complete. Well there’s always next year, and if there had been sound then I couldn’t have had the fun of playing the game while listening to the dolcet tones of Kerwin Whites’ and Sir Robert Conways’ entrance themes; an experience not to be passed up by anyone.

But rather than end this on the recommendation of playing the title while singing about having a cup of coffee beside the pool, I will heartily state now that if you are a fan of Grey Dog’s former wares then you will be right at home with Wre Spi 2. If you have been intrigued by the concept of a text based wrestling simulation, again I can heartily say to you also that you can do a lot worse than make your first experience of the genre occur with a whirl of Wre Spi 2. It is a title made clearly by fans, for the fans; which is why Wre Spi 2 is worth a try from both from those deeply rooted into their wrestling and those whom give it a passing fancy. Many have dreamed of stepping foot into the ring, but our build, our height, and our looks have let us down at the first hurdle (alright that’s just me). But importantly Wre Spi 2 lets you fantasise this dream becoming a reality, and whether you take your own guy or a pre-created roster member, the game immerses the player in the experience and helps to craft them an affinity with their brawler or luchadore that stays with them until they have achieved the final goal of being the champion of the world.