This pay-per-view event was a very pleasant surprise. After a dismal Raw-brand ‘Backlash’ pay-per-view, WWE rebounded strongly with an unexpected, excellent showing from the Smackdown brand’s ‘Judgment Day’. It was one of those shows where everything clicked, the matches were great and the angles were of significance. 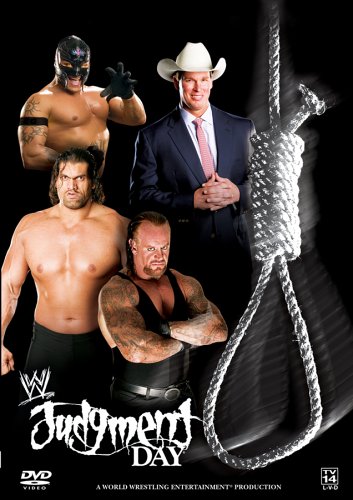 Disc 1 Chapters: 14 chapters. These are entitled:

MNM vs Brian Kendrick & Paul London was an excellent opening match. If only WWE had two or three other tag teams that could perform as well as these two did. The big story of the match was Kendrick & London not only winning the tag team titles, but MNM splitting up after the match. At the time, it was a huge surprise, and rumours were flying around that it was a punishment of some type. Hindsight now shows Nitro and Melina in strong positions on Raw, and Mercury unfortunately in rehab. C’est la Vie.

Chris Benoit vs Fit Finlay was an even better match than the opener. This was a stiff, old-school wrestling match, that lasted for over 20 minutes. This match came just before Finlay was given/saddled with his Leprechaun sidekick.

Jillian Hall vs Melina was the atypical Divas match. As these things go, at least it wasn’t atrocious. After the match, Kristal Marshall punked out Melina in the aisle way. Melina definitely did ‘the time honoured tradition’ on her way out of the brand, that’s for sure.

Gregory Helms vs Super Crazy was a good Cruiserweight encounter. Crazy seemed very over with the live crowd, and it was encouraging to hear them chant ‘ECW’ unprompted, and also do the counting of Crazy’s punches in Spanish.

Kurt Angle vs Mark Henry was a tad disappointing, although in hindsight, Angle was very banged up at this point and was limited in what he could do in the ring. Henry winning via count out was lame, but the aftermath of Angle going crazy with chairshots was okay.

Bobby Lashley vs Booker T for the right to be called ‘King’ was a very enjoyable match. For me, it was pleasing to see Booker become King, as I felt at the time that it would really suit him and Sharmell’s characters, and I think I’ve been proved correct since then. Lashley spearing the newly crowned King Booker out of his throne in the entrance area made for a good visual and helped him get his heat back after the loss.

The sole bad match on the show was the Undertaker vs Great Khali. This match has become something of a rarity, as thus far, it has been Khali’s only match broadcast live on WWE television. He was pulled from his Great American Bash ‘Punjabi Prison’ match through illness, and his scheduled Summerslam rematch with Taker was switched to a pre-recorded Smackdown, so that the match could be edited ahead of time. Watching this match illustrates how wise a decision that was. Khali’s offense here was unintentionally hilarious, as was the fact that he didn’t take one bump the entire match. That said, Taker was absolutely busting his ass to make this match at least bearable, which it was. Khali proved in this match that he was easily the worst WWE wrestler since Giant Gonzales.

The main event of Rey Mysterio vs JBL ended the pay-per-view portion of the DVD on a strong note. It was another good match, and Mysterio’s shock victory over JBL was a welcome surprise. So, all-in-all, a very enjoyable show. On to the DVD extras, all three of them…

Three DVD extras. THREE! WWE, you really are spoiling us…

In the first extra, a short ‘WWE Exclusive’ filmed after the show, Chavo and Vicki Guerrero were backstage. In a scripted segment, Vicki implores Chavo to reconsider his ‘retirement’, and uses Mysterio’s victory over JBL as an example of what sheer will can achieve. Whatever. I can’t come up with one reason why this is included on the DVD, apart from maybe WWE thought this might be good foreshadowing of future angles. Personally speaking, I am vehemently against Vicki Guerrero being featured as a performer on WWE television anyway, on grounds of taste, so I didn’t care for this extra at all.

The second extra is slightly more entertaining. The two foot tall Kristal Marshall interviews the ten foot tall Giant Khali (alright, maybe my measurements are slightly out, but you get the picture) backstage. He basically grunted quite a bit, and then said something incomprehensible, before doing a heelish laugh and walked away. Khali’s vocal skills are on a par with the late Andre the Giant. I must admit, he does crack me up, even if I have no idea what he says and never want to see him actually wrestle.

The final extra is the best of a poor bunch, a segment lifted entirely from an edition of ‘Friday Night Smackdown’ (May 26th, 2006). It is King Booker and Queen Sharmell’s coronation segment, complete with an elaborate ring entrance and William ‘All Hail King Booker’ Regal handling the proceedings. This was classic 1980’s style WWF campness at its’ finest.

The pay-per-view show itself is very good, and this DVD is well worth purchasing just to see it. The extras – both the number of them and what they consist of – are, quite frankly, pathetic. This show originally aired on Sky Box Office as an actual bonafide pay-per-view event in the U.K., as opposed to a ‘free’ airing on Sky Sports. One would think that given people have already paid £14.95 once to see this show, that WWE might push the boat out a bit on the DVD release, and add a number of key extras that might make people who already ordered the show once consider paying £13.49 for it again.

Here’s some sample ideas: I noticed that brief clips from the 1993, 1996 and 2000 King of the Ring shows aired on the pay-per-view event. Given that King Booker’s coronation from Smackdown was included as an extra, why weren’t the coronations from the aforementioned King of the Ring’s included? There wasn’t a coronation ceremony in 2000, but they could have included Bret Hart’s coronation and angle with Jerry Lawler from 1993; or Stone Cold Steve Austin’s coronation and subsequent ‘Austin 3:16’ speech from 1996. Maybe even some classic King of the Ring matches from over the years too (Bret Hart vs Mr Perfect from 1993, perhaps?). Anything would be better than worthless skits involving Chavo and Vicki Guerrero or Great Khali being interviewed. I could go on, but you get my point. WWE really needs to rethink their strategy regarding including extras on the DVD releases of their pay-per-view events, as I’m surely not alone in being one of their potential customers who consider the extras included on releases as a selling point. Including just three, two of them being worthless and another just being a segment lifted from the succeeding week’s tv show just seems like a token effort when they could do more. Extras should be special and a bonus.

Buy it for the pay-per-event, but not for the extras.