So, here’s the next step in Vince’s big dreams of having a finger in every pie in the world – a novel based upon his WWE Superstars. And not just any novel, oh no – this novel casts your WWE stars as undercover agents working for the National Security Agency. 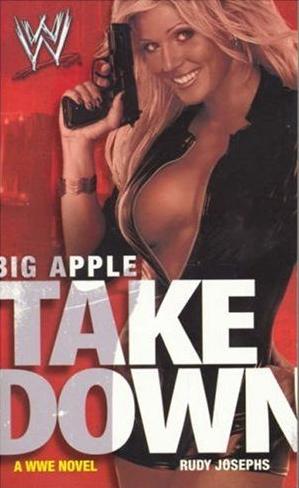 Lost the will to live yet? Trust me; if you can manage to finish the book, then it’ll happen.

What’s the problem with the book? Well, for a start there seems to be some confusion about the actual author of the book. The press release and book selling websites claim that Robert Caprio (who handled editing and ghost-writing on the WWE Travel book “Are We There Yet?”) wrote the book; the copy in my hands credits it to Rudy Josephs, who is behind the novel based on the upcoming John Cena flick “The Marine”. When a basic fact such as who actually wrote the book is in as much doubt, then you have to wonder why, and doubt the overall quality of the product.

When the product is as bad as this though, you can’t really blame anyone for not wanting their name on it. It’s hands down THE worst book I have read all year. Not even withstanding the idiocy of setting recognised WWE stars as UNDERCOVER agents, but looking at the actual story?

It makes no sense – in the space of just two days, Triple H, Chavo Guerrero, Batista, Torrie Wilson, John Cena and one other surprise guest crack a nationwide drugs and arms smuggling ring. Don’t expect to get a lot of reading out of this either – longevity isn’t a strong point on this one – I breezed through this in just under 2 hours.

The writing is clunky and does not flow well; the flashback scene that attempts to fill in some back-story between Vince McMahon and his government counterpart is idiotic at best; and the actual set pieces in the book are over and done with before you actually get a sense of what’s going on – not to mention that the characterisation given to anyone from the WWE is so ridiculously slanted to a positive viewpoint that it’s hard to read without laughing in some places.

“Vince slipped into the backseat without waiting for Tony to get out and open the door. They had long since dispensed with that pretentious bit of business.”

Quite frankly, the whole thing seems to have been slammed together in one afternoon and quickly rushed to the market. Yes, I know I’m not a published author, but I’m not a chef either, and I know when toast is burnt.

The whole thing just smacks of a PR exercise by Vince to amuse himself by casting him as the ultra patriot determined to help serve his country, and his ever-willing superstars as James Bond style spies… even the premise is ludicrous to most of the people this book would be aimed at.

But who is the book aimed at? There are a few instances of swearing and violence, not to mention fairly adult themes, so it’s not aimed at the kiddies; At the same time it can’t be aimed at the Internet crowd as at a few points, the book more or less attempts to keep kayfabe in places, which is laughable if you’re expecting these guys to be working undercover together.

All in all, this is just a horrible mess – hopefully it’s a one off and Vince won’t decide to make a whole series of novels based on this… I don’t think I could take anymore.