By Paul Kelly
Wrestling Music CD Reviews
This page contains affiliate links. At no additional cost to you, we may earn a commission if you click through and make a purchase. Learn more

How to approach a review of wrestling themed songs? Christ almighty, that’s something I never thought about before. Should I dissect each track and give each a score while commenting on how each song is suited to each superstar? Or maybe I should just review it as an album, ignoring its wrestling roots? Or maybe ignore both options above and just watch The Princes Trust 30th Anniversary Show, after all that dozy blond from Celebrity Big Brother is on, you know the one, or maybe you are lucky enough to have never heard of Chantelle… 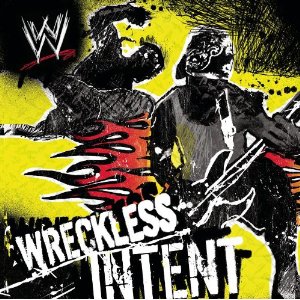 After much soul searching I decided that the T.V. should go off as this review takes priority, that, and Kam sending me abusive emails about my laziness, convinced me to get a move on!

This CD is an eclectic mix of styles with Rock happily shooting the breeze and sharing a beer with Rap while Indie is busy playing on the pinball machine (and scoring higher than Pop). Highlights include the tracks by Saliva, Mercy Drive, Zebrahead and Theory of a Deadman, while disappointments include Kaballon, Desiree Jackson and Motorhead.

Motorhead have in the past produced some of the greatest rock songs I have had the privilege to hear, but King Of Kings feels just lazy with Lemmy seemingly unable to change notes throughout and the riffs stolen from other Motorhead songs. Hell this style of music was done better in the eighties by Marillion, the song Grendal springs straight to mind. It seems that the only people who have praised this song are either die hard Motorhead fanatics or Triple H fans unable to accept that something less than mediocre could be associated with the multi-time champion (but I have to admit that I was amused with this track being last on the CD…again HHH is holding down the rest of the roster).

Conversely I found the Homebwoi song oddly fun with my head nodding backwards and forwards, like the first time I heard Purple Pills! This song is worth a listen if for no other reason than to look like a Churchill nodding dog, oh yes yes yes!

Zebrahead’s With Legs Like That Maria had a huge advantage from the start: it’s the song for my favourite diva! I like the little touch of the introduction of the song mirroring that of Blondie’s ‘Maria’, sometimes its moments like that which make songs that bit special.

Killswitch Engage…this is an odd band, sometimes great, other times leaving me bleeding from my ears. And not in a good way. This Fire Burns manages to land in neither category, being a very average song. I cant imagine anyone using this song as a selling point for any album or band.

‘Is this actually worth buying?’ I hear you ask. Well…yes actually. If you enjoy a mixture of styles then this is a fantastic album, if on the other hand you like only one style really (and I know everyone will read that and claim they enjoy a mixture, but be honest with yourselves about your likes, for your ears sake) then avoid this as the bits you will enjoy will no doubt be available on the bands individual albums surrounded by more of the same.

For once a wrestling CD that isn’t just for wrestling fans.