King of the Ring: The Harley Race Story Book Review

In recent years Harley Race has been inducted into the WWE Hall of Fame (despite spending most of his career outside the company) and was last seen at the Raw Homecoming but as this autobiography reveals, Vince McMahon’s company was not Harley’s favourite wrestling promotion. 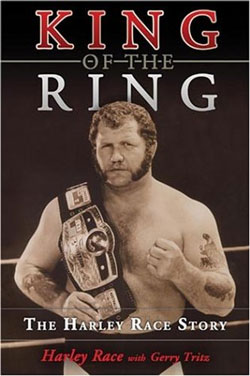 Race is regarded as one of the toughest men ever to set foot in the wrestling ring. He turned pro at the age of fifteen way back in 1959 and has been everything from champion wrestler to manager to promoter, something he does to this very day with his company World League Wrestling.

This is a great book for looking back at the career of a man who has fought all the greats, yet it’s a career that was nearly finished back in 1961 when driving to his wife’s family on Christmas Day they were involved in an accident that left both of them pronounced dead at the scene. It wasn’t until Race was in the ambulance on his way to the morgue that the medics detected a pulse. Sadly his wife didn’t make it and they’d only been married for a month. Race nearly lost a leg in that accident but twenty one months later he was back in the ring.

Like many wrestlers, Race seemed best working as a heel but it caused him many a problem. He writes: “If you do your job well the fans will hate you. But if you do your job too well they might have more on their minds than just holding up signs and booing.” Those extras included being shot and stabbed but Race wasn’t the kind of guy who’d come out and say it was all an act in order to protect himself and his family.

Race won his first NWA Heavyweight Title in 1973 and the story of how that came about is an interesting one for those of you interested in the politics of this business. After losing the title he went nearly two years before winning it again, while that happened he also became a promoter in Tampa.

There are of course plenty of stories from inside and outside the squared circle including what it was like to travel with the 700lb Happy Humphrey and how Terry Funk nearly blinded him in the ring.

Wrestling historians will be fascinated by his recollections of the decline of the NWA caused by the arrival of Mr McMahon which explains why the WWF/E weren’t his favourite promotion, especially as it cost his own promotion a lot of his own money. Vince was always keen on getting Race to defect from the NWA and one attempt ended in violence. Eventually Race did join Vince though he never had the glory that he had in the NWA, he joined a few years too late. This is a fascinating book and I highly recommend it.