Well here it is, the big moment that will have had you on pins and needles for WEEKS. WEEKS I TELL YE! I have finally dragged myself away for the sheer glutton of new extremely enjoyable wrestling games on the market to actually review them, in this special review week, where I catch up on the work I was meant to be doing so a certain someone doesn’t yell at me more and threaten to do me and my family bodily harm.Anyway, launching this week of… things, I’ll be taking a look at the latest in the successful range of Adam Ryland based games, TEW 2005. The one that Russ worked on, and thus had to quit his job here, less he be thought of as a hypocrite. Me? I just got a free copy, so I only have slight bias. Let’s dig into this baby… not literally. I mean I’d never recommend actual baby eating, it was a metaphor for the game, not that I’d recommend eating TEW 2005 for that matter. You know, let’s just forget the whole thing. 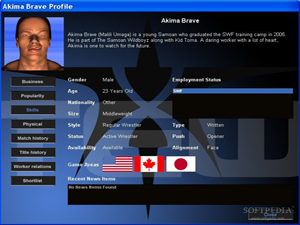 I know a lot of you are probably sitting there right now thinking, EIGHT? FOR A TEXT BASED GAME? WELL I NEVER! But the truth of the matter is that a lot of effort has gone into this game to make it a bright shiny beacon of graphical joy. Each of the fictional wrestlers in the made up wrestling universe in which this game is based has their own individual poser style mock up, so unlike previous efforts, you’re not just looking at a mish-mash of names, you can actually put a face to the name and the gimmick, and I’ll be honest, for a guy who’s as forgetful as me, that can come in very handy. On top of the nice graphical representations of each of the wrestlers, which are done real well, as in to say, Adam and his team didn’t just draw stickmen in hats for each of the wrestlers – which one is for my wrestling game coming out next year, funnily enough titled Stickmen in Hats Wrestling. It was also my Standard Grade art project. Where was I? Ah yes, on top of the posers, you also have a nice, simple, well laid out graphical interface that’s pretty damn easy to deal with. I’ll be honest, I was a critic of the original TEW because there was just too much to deal with, a vast amount of options, but the graphical layout of this years incarnation has made it a lot simpler to deal with. There, I justified my eight. TAKE THAT CRITICS

You know, no matter how many times I tried to turn the music on this game on during the main mode of it, it just wouldn’t come. I’d jump into one menu, and then suddenly the main menu music would disappear, never to return. Which was quite disappointing as I may have enjoyed the title music if it hadn’t constantly ran away from me, like many an ex. So that was frustrating, apart from that, the only sounds you’re given are the random boops and beeps of JOY. If you love boops and beeps, then the sound will rating will be an easy ten for you, as it is for me, it meant I couldn’t play CDs on my PC at the same time because they’d get in the way. Maybe I just don’t understand the options menu. 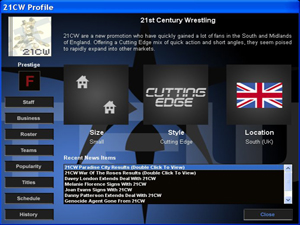 Now this is the thing that’s important to this game, since it’s a text based simulator, it doesn’t sink and swim based on graphics, or sounds, it’s all based on the game play, but the big question is, did TEW 2005 deliver. Well actually it didn’t, mostly because it was a CD-Key download type thing and not a CD delivery system…

Cheap puns aside, if there’s one thing TEW 2005 gives you in buckets, it’s gameplay options and gameplay features. I mean just the vast number of features the game offers you will take days to find the ins and outs of, and this is before you even book your first show. One of the options that was added to this game that TEW was sadly lacking was complete and total control over your storylines, there are of course the generic storylines there for the lazy, but for the control freaks, like myself, you get to take the helm and you get to decide how to progress a storyline. Don’t like where it’s going? Change its direction completely; I know I’ve done it a lot – mostly due to my ADD – Which is odd, because this is certainly not a game for the ADD prone. This game is catered for the creative mind, it truly is, thanks to the editor which I’ll get into in a second.

Of course, like all previous carnations of Adam Ryland’s booking simulator, you sit at the helm of the company, you hire superstar, fire them, book them in matches, book them in storylines. Try to get grown men fighting in bra and panties matches, and be disappointed when they completely refuse, you then up the stakes to a buck naked match, then laugh like an idiot at how completely stupid you are and realise that you should never, under any circumstances be put in charge of a wrestling promotion. Or maybe that was just me.

When you start the game with a new company, you have the option to either be head booker of the promotion, which requires less work, but means you have to meet the goals of the overall owner, or you can take complete and total control of the company, which means you have to keep your eye on every corner of the company and make sure every single little thing is as it should be, but on the plus side you have no goals to meet but your own. I generally take the head booker route because I need goals, otherwise I just end up doing scenarios like the ones mentioned above.

With all of that said, I love this game and it’s gameplay completely, you can easily get engaged with this game from the minute you load it up due to the huge amount of things you get to control, not to mention the fact you have to deal with competition, which trust me, can get really nasty if you have a higher difficulty level. I’ve run two companies into the ground due to general panic attics caused by the competition doing better. WE LOST RATINGS THIS WEEK? QUICK BOOK EVERYONE IN A DEATHMATCH WITH ACTUAL DEATHS! 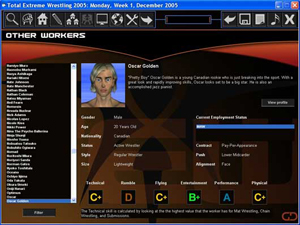 Total and complete control, you can edit everything in the wonderful editor for this game. You have control over what to name everything, what anywhere’s starting rosters is, how much money they have at the start, the name of their wrestlers, how talented they are. Basically, you have complete and total control over every little thing. You can sit there all day on just the editor, trying to make a dream wrestling universe, where everyone can fight in a bra and panties match! Or is that just me again?

With the sheer amount of things you can do in this game, it’s easy just to get tied up playing it for days at the time. Keep a successful company on top, make some ten year old’s backyard wrestling company a multinational stronghold. It’s incredibly time consuming to do it, but extremely plausible with the right sort of business and creative mind. You can jump in and out of playing this game, but really you have to put time aside to fully enjoy it, which is why it’s not a perfect ten. It’s just too in-depth, that unlike say a PS2 wrestling title where you can just boot it up and play a match to pass your time for a short while, you can’t boot up a game like this and just book a card, because a lot of thinking and planning needs to go into a card, and the card booking system itself is time consuming with the fact you have to assign time to each segment. In some ways, I miss the days of the EWR set segments on a show as opposed to time method, although the current method is certainly more realistic, it does lose some jump in and jump out factor due to it.

I have to admit, I honestly feel that for me, this years version of TEW is leaps and bounds better than last years. Now you may question my reasoning here, when I’m giving this a 9 and Russ last year gave the original a 9.5, well, it’s quite simple, if I was reviewing TEW last year, I think some of the fans of the series would have stoned me, because the game was too vast for my tastes. There were just too many options, too many boxes, just generally too much, that wasn’t structured as well as this years incarnation, that I’ll honestly admit, I found off putting. So to any one else who felt the same about TEW, but enjoyed EWR, I’d certain recommend you picking up TEW 2005, as for me, it’s got back the enjoyable playability factor for a guy like me, while still remaining a complete in depth, realistic simulator for those seeking the real life thrill.

TEW 2005 is an easy thumbs up, and you can buy a copy over at greydogsoftware.com. It’s a great game for people who just want to play around as boss of a company just to see how quickly you can destroy it (the fun factor) and it’s even better for the more serious player who wants to create their own industry and write diary’s about it (although they probably have already bought the game)