Rob Van Dam: One Of A Kind DVD Review

Today I got chance to sit down and watch a DVD I have been waiting to see for some time, a DVD dedicated to one of my favourite wrestlers: Rob Van Dam. So even before putting it in the old DVD player I was psyched. So did the DVD live up to the hype I hear you ask? Well you are going to have to read on to find out as I give you a rundown of my thoughts and opinions on a truly one of a kind DVD. 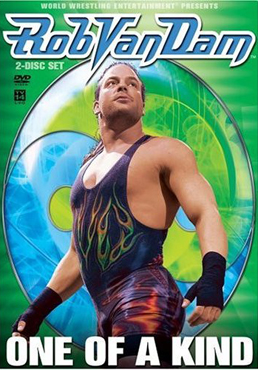 RVD has had an illustrious career in the wrestling business working for every major promotion in the U.S as well as working all around the world doing various tours and one off shows. RVD’s athletic risk taking style brought him into the hearts of many as well as getting known as “Mr. Monday night” and “The whole F’n show.” RVD is truly one of wrestling’s modern day phenomenon’s who has already written himself in to the history books.

The DVD is well proportioned focusing more on RVD’s career before the WWE which the hardcore RVD fans will want to relive and the people that are new to RVD want to find out about.

WCW days – The DVD starts with how RVD broke into the wrestling business as Robbie V thanks to a new concept from WCW “The underdog challenge” where two unknown wrestlers would square off against each other for a spot on the roster. RVD speaks on his reluctance to wrestle under the Robbie V name due to him already getting known on the indy circuit as RVD but this was a compromise he had to make with Bill Watts to get on the show.

It was very interesting to see how RVD started in the business and how he has changed since those early days. His WCW days show how much of a metamorphosis Rob has made from a light weight wrestler with little character coming out dressed in his martial arts gear to the cocky and cool high flyer we see in the WWE today.

ECW days – This is the focus of the DVD as this is where Rob Van Dam truly made his name. ECW was another chance happening though as Rob tells us how he left under a cloud at WCW and if it hadn’t been for the way things went down he was prepared to keep on working for them. Rob got another chance with ECW and boy did he grasp it with two hands.

Rob takes us through his ECW highlights including his friendship with Sabu, his awesome series of matches with Jerry Lynn, the various injuries he suffered wrestling the extreme style, the ECW fans and his 23 month reign as Television Champion. My favourite bit of the ECW section and the most interesting bit is listening to RVD talk us through the historic ECW invasion on to WWE television in 1997 and how close he was at the time to going back to work for WCW.

The invasion was a confusing angle which Rob helps explain to those who may be a little unclear as to what went down. The invasion for him was all part of his gimmick in ECW and how “Mr. Monday night” was born. At ECW’s first PPV his character turned as he sent ripples around the wrestling water as he proclaimed he deserved to be on Monday nights not in a bingo hall. At this time everyone thought he was going to WCW as they had offered him a deal so he shocked the world the next night by turning up on Raw. Rob still stayed contracted to ECW as the WWE deal was only a short run and just used to promote ECW but Rob used this to announce himself on the world stage.

The ECW section includes some of his most famous matches in ECW which include his match against Jerry Lynn at Living Dangerously 1999, his Television title win against Bam Bam Bigelow and his favourite match against Sabu to name just a few.

WWE – The DVD ends with his immediate rise to fame in the WWE and how overnight he changed from “Mr. Monday night” to “Mr. Thursday night” when he changed over to Smackdown. He also talks through how he brought his ECW style into the WWE by going after the hardcore title so he could show the WWE fans what he was about.

Rob then goes on to talk about how he has had to turn down his style due to the grueling WWE schedule as his body has no time to heal like it did in ECW but he assures us he is always ready to break the big moves out at the right moments.

The only downfall of the DVD is that we don’t hear anyone else’s opinions and thoughts on RVD and his accomplishments, we only hear from Rob reliving his career. This for a RVD fan though is a good thing as we get to find out what was going through his mind when he did some of his most death defying moves and how he saw certain situations.

This is an awesome DVD and is a must have for any wrestling fan as this DVD is truly part of history highlighting the career of one of wrestling’s greatest personalities Rob Van Dam. The DVD features footage from events you can no longer purchase in the UK so this is your only way to own a bit of a history and own some historic matches in DVD quality.