By Tony Cottam
Wrestling Music CD Reviews
This page contains affiliate links. At no additional cost to you, we may earn a commission if you click through and make a purchase. Learn more

For all you nu-metal kids out there that think Linkin Papa Bizkit are the kings of metal, long before them, there was ‘Heavy Metal’. Then, it’s offspring was born, and lo, it was called Thrash. 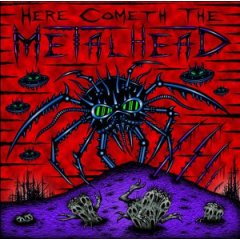 Before I get into the meat of the review, I should point out that I pretty much grew up with some of the bands on this record, so my views my be a little biased by the rose-tinted lenses of time… so beware!

This compilation promises classic ‘thrash metal and hard rock tracks from the band who have shaped the world of metal’ and tracks from ‘today’s generation of heavy rockers’ also. Does it back up the hype? We’ll get to that at the end, but the first obvious point is that any album promising classic thrash metal and not having anything from Metallica, Megadeth, Anthrax and Slayer is missing a HUGE part of metal history… but I guess you can’t have everything.

So if the Big Four aren’t here, what do you get for your hard earned cash? There are some great bands represented on this record, some that never really hit the mainstream level of success that they perhaps deserved. I’m talking bands like Overkill, Kings X, Kyuss, and Ministry; There’s cult bands like The Melvins, Tad, and Sick Of It all; and there’s a couple of Giants Of Rock in there – Pantera, Dream Theater and the almighty Faith No More.

Slam the disc in the player – or the PC, whatever – and you’re greeted by the aural assault of Overkill. Overkill were an established thrash band in the late 80s/early 90s that rode the coattails of Anthrax and Slayer, but never really made the break through. The track on the record, ‘Bare Bones’ is fairly indicative of their style, and comes from probably their best album ‘Horrorscope’. Classic thrash, I loved this first time round, and it still sounds good to me…

Testament brings their A-game to the table next with ‘First Strike Is Deadly’ from their 1987 debut album ‘The Legacy’. The second oldest track on this record, it still holds up today as being a great example of a genre that was at it’s strongest in the late 80s – the fact that Testament never really made it to the top echelon of thrash shows just how strong. If you like riffs that weigh a ton, complex solos and manly vocals, then this is the noise for you.

The first of the big names in Pantera weighs in next with ‘Heresy’, from 1990’s classic ‘Cowboys From Hell’. Phil Anselmo’s vocals and Dimebag Darrell’s guitars are the stars here. Pantera are a band that there’s no middle ground – you love ‘em or you hate ‘em – frankly, I love them, but this perhaps isn’t the best introduction to the world of Pantera. As a taster, it does give you an idea of how uncompromising they were at their peak, however.

Here come the Canadians! Run for the hills! OK, that’s not really fair, but Canada and thrash metal never really went hand in hand apart from Voivod. For whatever reason, Voivod never really excited me as a band, although the track here – ‘Tribal Convictions’ from 1988’s ‘Dimension Hatross’ – has aged well… maybe time to dig out the old records and see if I was wrong. Thrash metal? Not really, but worthy of inclusion.

Long before Marilyn Manson and Nine Inch Nails, there was Al Jourgensen and his Ministry. Ministry were doing industrial before industrial was there to do. ‘Stigmata’ is one of, if not THE finest industrial songs you’ll never have heard. Do yourself a favour – once you’ve heard this, go and find a copy of 1988’s ‘Land Of Rape And Honey’, then 1992’s ‘Psalm 69: The Way To Succeed And The Way To Suck Eggs’.

Clutch aren’t a band that I know too much about, other than they were considered pioneers of the Stoner Rock movement later taken to new heights by Kyuss and Queens Of The Stone Age. The track they have here, ‘Pure Rock Fury’ is aptly named; huge riffs, great solos and gruff vocals combine to great effect here.

Super group albums… all egos, no songs, right? Until Down appeared, that is. Featuring members of Pantera, Corrosion Of Conformity, and Crowbar, Down’s 1995 debut album ‘Nola’ remains a classic to this day in my book. ‘Lifer’ just happens to be my favourite track from this album, so it’s a result all round as far as I’m concerned. Heavy, dirty, groovy and downright loud – what more do you need?

Faith No More: one of the greatest bands ever to grace this planet. They need no introduction. Weighing in with one track from 1989’s classic ‘The Real Thing’ album, ‘Surprise! You’re Dead!’ is an under-rated entry in FNM’s back catalogue, although ‘From Out Of Nowhere’ or ‘Epic’ perhaps deserved inclusion ahead of it. Still, if listening to this makes you want to go out and buy the album, it’s worth it. Go get it!

The Melvins have a huge underground following, ever since one Kurt Cobain proclaimed himself a fan. I have to say, I’ve never really understood them, or got into them, but ‘Buck Owens’ is heavy enough to make me tap my foot and nod my head, even with it’s Nirvana-ish quiet middle section. Not the best track on the record, but not out of place either.

Like Queens Of The Stone Age? If you do, you’ll either already know of Kyuss, or love them once you hear them. Featuring Queens’ front man Josh Homme on guitar, ‘Conan Troutman’ is the chosen track here, cut from it’s original home as part of an 18 minute epic on 1994’s ‘Welcome To Sky Valley’ – Kyuss should have been huge – QOTSA’s success could easily have been theirs, but it was not to be.

Damage Plan are a new entity to me. I’d heard of them, without actually hearing anything by them. Spinning out of the ashes of Pantera, their heavy riffs and relentless drumming are to be expected. Without sounding dismissive of them, from this one track, it looks like they are Pantera with a different vocalist. ‘Breathing New Life’ is probably the weakest track on the record for me.

Metal Church were one of the first thrash metal bands that I remember, and their inclusion on here is a nice nod back to the beginnings of a scene that evolved so much, between their first album and their second, they were left behind. ‘Ton Of Bricks’ isn’t necessarily bad, but hasn’t aged well since it’s 1986 release. Think what The Darkness will sound like in 20 years, and you’re not far from the truth.

Sick Of It All are a band that I have a soft spot for, but don’t actually own anything by them. Pretty much everything I’ve heard of them has been on TV, compilations or magazine freebies; ‘End The Era’ is not Sick Of It All at their strongest and just feels like it was recorded with the intention of being compilation fodder. Not really a fair representation of the band, but by no means awful.

King’s X are one of rock’s best kept secrets, and have been for years. Criminal is the only way to describe the lack of success achieved by this incredible trio. King’s X came closest to the mainstream when they had a track on the soundtrack to Bill & Ted’s Bogus Journey, of all things. ‘Dogman’, from the 1994 album of the same name, is the strongest track on this record for me. Just an incredible band, really!

Up next is Tad and ‘Emotional Cockroach’ – the most uncompromising song on the record. Hard to break down, and with no light moments, it’s not the easiest of bands to get into and they sound downright evil in places. Not one to throw on at a party, but it does strike a chord if you’re in an angry mood. A good example of how far metal can push the envelope at times.

Cancer. Not the greatest ever name for a band, it has to be admitted, but strangely accurate for this group of death metal riff-merchants. Again, not a band I’ve had a lot of experience with, but I have to say, they chug out a riff quite nicely. ‘Without Cause’ is a good introduction to them… it’s just possible I may have to check out some more of their stuff.

Closing the album, Dream Theater bring with their own brand of technically excellent guitar work and smooth vocals. ‘Honor Thy Father’ isn’t the heaviest, fastest or hardest metal anthem you’ll ever hear, but it is one of the best. Proving that not all metal needs to be angry, devil worshipping and three chords, Dream Theater are a different breed to everything else on this record, and make a nice contrast to close out the record.

So does the record hold out on it’s promise of classic metal? Yes, to an extent, it does. Some of the bands on here deserve to be heard, and the bands themselves are classic… however, the track choices from those bands are a little strange at times. With none of the aforementioned ‘Big Four’ present, it’s also hard to call it a thorough selection of classic thrash and metal.

‘Here Cometh The Metalhead’ does serve well as a taster for the new music fan who may not be aware of some of the bands that inspired a lot of the current groups and trends – it’s useful as starting point if you’re just discovering life beyond Radio 1 and 2 or 3 of the tracks on here are genuine ‘Must Have’ quality.

Would I recommend it? Yes, I would. It’s obviously not for everyone, but it’s something that I could find myself throwing onto the MP3 player for that trip to work and not be tempted to reach for the skip button once. Well worth seeking out, metal heads… put the Slipknot record back on the rack… trust me.