By Simon Lamb
Wrestling Book Reviews
This page contains affiliate links. At no additional cost to you, we may earn a commission if you click through and make a purchase. Learn more

Last year, everybody’s favourite old man of wrestling, Hulk Hogan, released a book and I happened to be one of the many who had the honour of reading it. Chances are that if you haven’t bought it or read it you’re never going to, but no doubt you’ll be interested to hear whether it was utter drivel like many wrestling autobiographies and what the Hulkster actually said in it. Read on for the review… 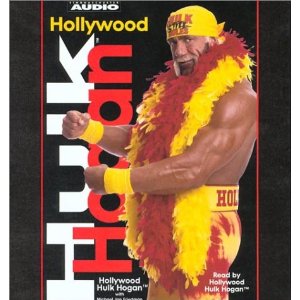 Well…. What can I say? Hogan’s book obviously didn’t cause a storm at the time it was written because much like the Rock’s, we all thought it wasn’t going to say anything controversial in it. Everyone already pretty much knew the Hulk’s story so there didn’t seem to be much that Hogan could bring to the table to make the book an interesting read. Either that or we all thought he’d talk crap in it. However, wrestling fans wanted to hear Hogan’s side of the story from moments like Wrestlemania VIII and IX. Just for a laugh of course.

In all seriousness, I have to say that I enjoyed Hogan’s book, although I didn’t pay for it so I can’t say if I feel it was worth the money or not. If you could get it cheaply then I would actually have to give it a strong recommendation just so you can well… have a good laugh at how Hogan clearly doesn’t realise how much of an idiot he is sometimes.

I kid you not, from the book you get the impression that Hogan just doesn’t acknowledge ANYONE else in the wrestling world as a drawing power, past and present bar perhaps Ric Flair and the Rock. Yet he does it in such a way that I personally just can’t hate him… he doesn’t seem to mean it.

Personally, unless you hate Hogan with a passion already, I can’t see you coming away from this book feeling anything but a bit sorry for Hogan. It feels as if he genuinely doesn’t realise when he pisses people off and generally causes a nuisance, and that’s the impression you get from other sources as well (such as Bret Hart’s stories from WCW… I too loved that one where Hogan was set to interfere in a Goldberg-Bret Hart match for NO reason whatsoever). He just comes away from the book sounding like a really nice guy who just doesn’t believe that wrestling can exist without him. This is probably why it was no surprise to hear how shocked he was when Vince didn’t use him at Wrestlemania XX.

The stuff he has to say about the earlier period in his career with Gagne and all that was what I found most interesting personally. You will come away with a greater, even if Hogan-tinted, wrestling knowledge after this unless you are already well informed; stuff you might not know like Andre the Giant not being able to fit his ass on the toilet seats in Japan thus resorting to using newspaper on the bed instead comes up in the book. You’ll also hear how Mr. T. almost RUINED Wrestlemania, and how Dennis Rodman was also a total moron. Funnily enough, the fact that Bischoff was obsessed with celebrities never gets mentioned though. Bischoff instead comes off as the nice man we all know and love. The facts speak for themselves in the book though, and you know that Bischoff was out of his depth when WCW became big, a point Hogan even acknowledges.

Have to mention also a classic quote from Hogan in the book. When Verne Gagne was basically trying to get Hogan into his family by trying to set him up with his daughter so he would never leave the AWA, Hogan says “But I didn’t want to marry his daughter just for some wrestling belt”. Wonder what Hunter thought when he read that. Bwahah.

What is perhaps the most interesting part of the book is when Hogan gets your sympathy over how badly Vince Russo treated him at WCW. You don’t need myself or even Hogan to tell you how much of a moron Vince Russo was at WCW, but Hogan does attack Russo for stuff other than the David Arquette title win. Hogan criticises Russo’s attempt to ‘out sleaze’ Vince McMahon and the creation of the Millionaire’s club angle, making the fair point that you have to have a mix of young and old talent to make wrestling work. He goes on to say that guys like Ric Flair would make it look like the new blood had stripped them of their pride they put them over so well, yet the crowd would cheer them since they knew it was bullshit and that Flair was still the man.

Hogan also buries Jessie Ventura in the book, claiming he was jealous, although Hogan complains about how Jessie Ventura actually dared to be a heel and take a dig at Hogan’s low budget film career whilst Ventura was commentating in WCW. I’m sure Jessie was a tad jealous yes, but not the best example by Hulk. He doesn’t say however that it was him who BLATANTLY got Ventura fired by WCW. Also in the book Hogan clears up the rumours about him and Bret Hart and doesn’t actually say anything against Bret, there were never any serious problems between them.

There’s also an awful chapter on kayfabe, and according to Hogan, us marks won’t understand that when Hogan would shout ‘dizuck’ to an opponent, we wouldn’t know that he was really meaning ‘duck’! Us silly marks! So glad he took the time out to tell us that. Other random things; blame Freddie Blassie for Hogan not selling anything, Hogan was told he sold too much by him, and ironically the finish for No Holds Barred was thought up by Hulk when he was on the toilet. Also, the Big Show was just some nervous Hogan mark who Hogan met at a basketball that Hogan got into wrestling.

I’d like us all at this moment and time to pause and laugh at Horace Hogan. Just because.

Also, expect your standard Owen Hart paragraph, and how Hogan was the man who phoned Bischoff to tell Bret that something had happened… because Hogan is a nice man you know. Plus obviously the Ultimate Warrior gets buried too. Hogan apparently stole Warrior’s heat at Wrestlemania VII by making sure he HANDED HIM THE BELT. Woah! You show him Hulk! Hand him that belt!

Funnily enough though, you don’t hear about Hogan’s disgraceful behaviour in the WWF, holding people like Mr. Perfect back etc. There’s no acknowledging these stories, but he does say that he became moany and hard to deal with in the nineties. He does admit that Vince was right in attempting to move away from Hulkamania, but he does his best to talk down anyone or any idea they had that didn’t involve him at the time.

Also, a bit random putting this in, but if you don’t already know, you’ll find out that Hogan trained wrestlecrap.com favourite Ed Leslie. Explains EVERYTHING.

He slams Wrestlemania IV, claiming that the tournament, which he didn’t win, just ‘confused’ and ‘bored’ the fans (ah of course, the knockout tournament can be a difficult concept to grasp), and also slams Wrestlemania VIII, where Vince missed the boat with a possible Hogan v Flair main event. Other notable nonsense; Sgt. Slaughter’s heel turn and Iraq gimmick was his idea. He thought his run in at Wrestlemania IX was a good opportunity for him to ‘pass the torch’ (no I kid you not, he actually says this). Vince McMahon was caught out lying (again) by Hogan and Bret when Bret was told by Vince that Hogan wouldn’t job to him, and they both confronted him… Vince’s excuse? “That was just what you thought you heard Bret”. I always knew Bret was a bit stupid… trusting a guy after he comes up with THAT excuse?

There’s loads of interesting crap in-between, personally I just find it funny to hear Hogan’s take on stuff. I know I said I enjoyed Hogan’s earlier stuff most, but the WCW stories were just as interesting to read actually.

Goldberg gets buried for suddenly turning into some moron that just refused to lose when he got the title; you get the feeling that Hogan just sees Goldberg as Warrior II, which I’m sure most people would agree with.

Russo basically comes off looking just as bad as ever after Hogan’s book, and he continues on to say that Russo’s treatment of him and the insulting shoot he did on Hogan really made him doubt himself and screwed him up. I’d imagine unless you are either a moronic staunch Russo fan or a real Hogan hater you would be moved by the end of the book when he’s talking about how his match with the Rock was his one shot to make it back. I have to admit, when Hogan returned I thought ‘ah he doesn’t really need this does he, I mean he’s doing fine anyway, must just be back for fun’. When you read the book you realise just how important that match with the Rock was for Hogan, and just how much his body was falling apart at that point.

Thankfully not much is said about the present WWE stuff though since it’d all be doctored, and the only cringeworthy part of the book comes from a couple of pages saying how great a talent HHH is, which just appears too randomly in the book to be genuine in my opinion, also considering HHH was on his comeback run at the time you would have to believe that WWE may have wanted something positive about HHH mentioned. Hogan also talks about his return with Nash and Hall as the New World Order and how they were going to look out for each other in the WWE, before as mentioned earlier going on to talk emotionally about his match with the Rock at Wrestlemania XVIII..

So overall, Hogan’s book is worth reading I personally believe. And there’s so much more that I can’t cover here because I’d just be re-writing the book if I did. I mean hearing him claim stuff like he invented entrance themes in wrestling is just an example of the type of nonsense he comes out with. I would say though that you shouldn’t end up hating Hogan after reading the book; you might feel a bit sorry for the fool if anything, since he does come across as a very nice guy who does appreciate his fans. You may end up with a different opinion from me depending on your stance on Hogan; personally I’ve never really had anything against him. But he does talk a load of crap sometimes, and the guy has so much to talk about.

So there you go; surprisingly strong recommendation to read, but don’t blame me if you don’t enjoy it!